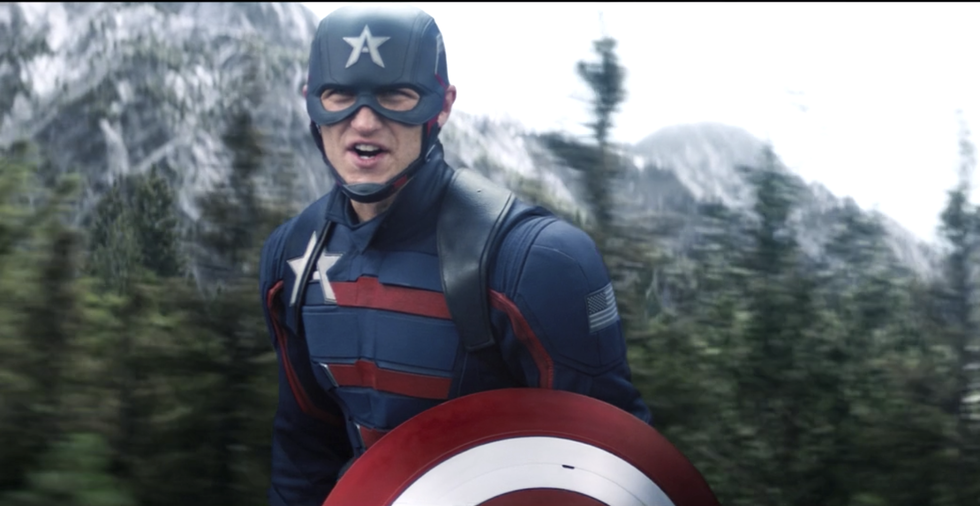 The following story contains spoilers for the end of The Falcon and the Winter Soldier, Episode 1.

At the end of Avengers: Endgame, the path of Captain America succession seemed clear: Steve Rogers’ (Chris Evans) time was up, and he’d chosen his good friend Sam Wilson (Anthony Mackie) as next man up. As Steve told Sam the news, their third amigo, Bucky Barnes (Sebastian Stan) looked on approvingly. Everyone was on board, and things are all good to ride off into the next chapter in the sunset. Except this is the Marvel Cinematic Universe, and things are never that easy. Disney+’s new series The Falcon and the Winter Soldier (which is now streaming its first episode and will run for five more weeks) picks up a few months after that moment, and the path of Cap succession has never been messier—and that includes an unknown “New Captain America”—who will eventually be known as U.S. Agent/John Walker (Wyatt Russell)—introduced at the end of the show’s first episode.

Early on in the episode, we find out what Sam did with the shield following his talk with Steve in Endgame: turned it in. We heard Sam say at the time that the shield felt like it “belongs to someone else,” but it appears that he really wasn’t feeling up to it, apparently. In an early episode scene, Sam is seen paying tribute to Steve—who has either actually died or they are telling people that he died—as Cap’s shield goes into government hands and onto display.

A conversation with James Rhodes (Don Cheadle) lets us know that Sam just didn’t feel right taking over for the legend who he knew for years as a friend. But that feeling looks instead to be one of conflict at the end of the episode, when Sam, watching on TV, sees the same government official he handed the shield over to introducing “The New Captain America.” Sam knows that this wasn’t Steve’s choice. He feels off. And viewers everywhere surely felt how Sam felt when this new guy doing Captain America cosplay winked into the camera. Groan.

What is John Walker/U.S. Agent’s backstory in The Falcon and the Winter Soldier?

While we haven’t seen any of Walker’s origin story yet—which may include some sort of path crossing with the unseen Power Broker—we did get a bit of a behind the scenes look at him in the opening moments of Episode 2, in the moments just before he became the new Captain America. And those moments did a nice job to show a bit of character nuance. While the Walker throughout the rest of the episode had almost a larger than life, overconfident persona, the Walker in the locker room in the episode’s opening was quiet, subdued, and seemed a bit skittish to even try to step into Steve’s shoes .

The remainder of Episode 2, though, showed Walker going big. His “humble” personality gave way to big moments in the fight on top of the truck and riding in the Humvee with Bucky and Sam. Walker isn’t like Steve, who was more than willing to oppose the government when the government was doing something he didn’t agree with—hell, think his own movies Winter Soldier or Civil War. The Walker version of Captain America is the opposite; he considers himself the government without flinching.

Even chatting with Sam and Bucky after Bucky got out of jail showed Walker wanting to collaborate with them, but being somewhat scornful and bitter when Sam refused. We’ll see where things go from here, but it seems like the New Captain America and Captain America’s old friends are already setting themselves up on opposite sides of the same coin.

Who is U.S. Agent in the Marvel and Captain America comics?

The story of U.S. Agent/John Walker in the Marvel Comics can give us a fairly decent idea of where the story is going in The Falcon and The Winter Soldier. In a nutshell, the character Walker first appeared in Captain America #323 back in 1986; his initial arc found him gaining super powers from someone called The Power Broker, and he then took on the superhero mantle of “Super-Patriot.” He was sharply critical of Steve Rogers/Captain America, publicly ranted against him, and even staged an attack (by fake Captain America fans called “buckies”) which he would win in public. Eventually, he would fight and defeat Captain America. (U.S. Agent/John Walker doesn’t super closely tie in with Sam/Bucky comic arcs, but as with most MCU properties, it does seem like they’ll be able to pick and choose pieces of stories from here and there)

But the arc we might really be interested in, apparently, comes in Captain America #333 after Steve Rogers abandoned the Captain America mantle due to not believing in what’s basically the comics version of the Sokovia Accords (government oversight on superheroes). The government then, familiar with Walker’s obsession and dislike for Rogers as Super-Patriot, ask him to take on the mantle, which he accepts wholeheartedly.

With Walker as a government-controlled (at least initially) version of Captain America, he tries to match Steve’s ethical, cool-headed ways, but his impulsive personality makes him more brutal and violent. During Walker’s time as Captain America, he at one point gets captured by Flag-Smasher (a villain who will appear in the Disney+) series and saved by Steve Rogers, among others. Perhaps this could be a spot for Sam in the show?

Click here to join MH MVP and get the best in exclusive features and workout tips.

Walker’s time as Captain America comes to a close in the comics when a storyline with a lot of body switching (Red Skull in a cloned version of Steve’s body, for one) ends with Steve and Walker coming to an understanding, and Walker eventually convincing Steve to take the mantle back as Cap, while the Government fakes his death and sets him up with his new identity as, yes, U.S. Agent. We’re not sure how it’ll play out in the series, but this would seem to be a reasonable kind of arc for Sam to finally become the Captain America that Steve wanted him to be in the MCU.

So, basically, as you can see in the image above, John Walker/U.S. Agent does eventually settle into a sort of good guy anti-hero type character (and one with his own solo adventure series). He’s more violent than Steve, and a brutal, loose cannon, but he means well. Think Homelander from The Boys, but, like, way less evil. He’s also always kind of compromised. In the famous West Coast Avengers comics, U.S. Agent is assigned to join the team to essentially spy on the other heroes for the government. Come on, man.

So what’s going to happen with the ‘New Captain America’?

It’s hard to make too specific a prediction, given the storyline in the comics was so intertwined with the Steve Rogers Captain America identity. But it does seem like Sam Wilson could be the guy to take on much of that storyline, given Episode 1’s focus on him, and the look of guilt and anguish when he saw someone else holding Steve’s shield.

This is just a guess. But maybe Sam and Bucky head out on a mission with Walker, and see first-hand the kind of impulsive brutality that were pivotal to his character in the comics. Maybe the three develop some sort of rivalry. Maybe Walker ends up a mind-controlled pawn of returning Civil War villain Helmut Zemo (Daniel Brühl)? We’ve seen some footage in trailers of Sam training with the shield. So does he get it back? Is that a flashback? Does Walker switch from Captain America to U.S. Agent relatively early? These are all possibilities.

We’re only one episode in, so there are plenty of options. But the one thing it does feel safe to predict—this “New Captain America” is probably not going to work out the way the government thinks it will.