The Filibuster Is a Plot Against Kamala Harris

Home /General/The Filibuster Is a Plot Against Kamala Harris 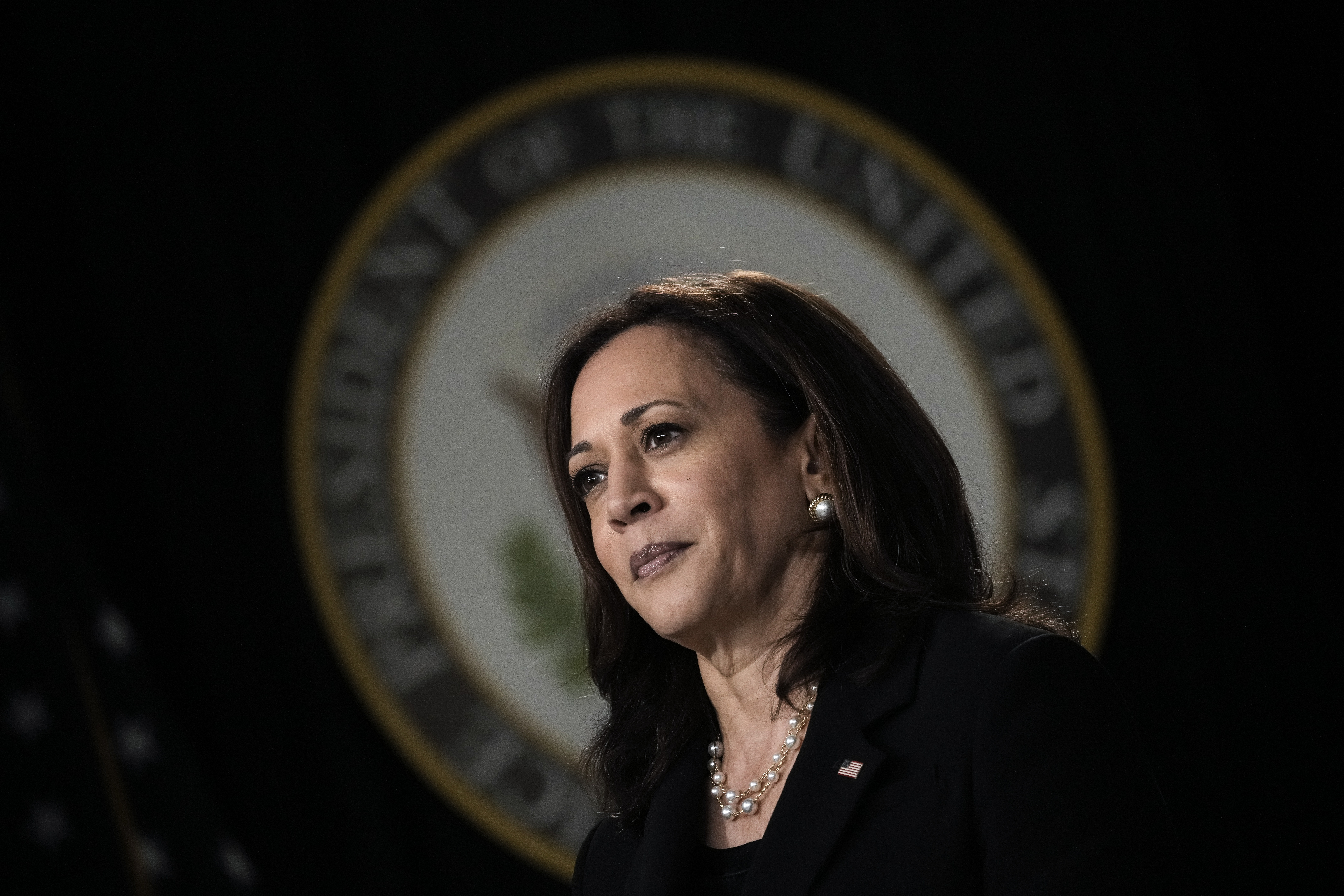 Over the course of many years and many think pieces, the case against the filibuster has been laid out. Typically, critics of the Jim Crow relic invoke various historical facts (some of which have apparently been lost on, or willfully ignored by, certain critical members of the Senate), as well as an array of practical and prudential bases. Onto the pile, however fruitlessly, let us add another: The filibuster is a plot against Vice President Kamala Harris—to take away her constitutional right to vote.

Article I, Section 3 of the Constitution makes it plain: Harris, as chair of the Senate, is given the responsibility to vote “when the Senate is equally divided.” In all the furor over the filibuster blocking voting rights legislation, keep in mind it is blocking Harris from this constitutional right, as well. The supermajority rule that ran counter to the Founders’ desires, now upheld by the filibuster’s status quo, is not just aiding in the disenfranchisement of voters by blocking meaningful voting rights legislation from passage—it’s also disenfranchising the woman sent to Washington to resolve the disputes of a divided Senate.

It would be fitting if Harris, given the chance to gavel the filibuster out of existence to pass the Freedom to Vote Act, reclaimed her rights at the same time. She can put that to the Senate on January 17 when any rules changes are being considered—by starting with a declaration that the filibuster is not just unfair or undemocratic but unconstitutional, as well.

The filibuster is not just a technical violation of Article I—though it is precisely that—it’s also a repudiation of its original design. That design created a bicameral legislature, with each house operating by majority rule, to replace the single legislative chamber that operated under the Articles of Confederation by supermajority or unanimous consent. By sneaking in a supermajority rule on the sly, as a procedural rule of debate, the Senate has essentially brought back a form of the obsolete Articles of Confederation. It shouldn’t really come as any surprise that the republic now faces a similar impetus toward disunion to the one it faced when the Articles were in place. The plot against Kamala Harris is not just a plot against the Constitution—it’s a force that threatens the existence of the United States itself.

It is without doubt a fact that the Framers wanted a deliberative legislative body. That’s why they divided the Congress into two houses—to provide a vital check and balance. Supermajority rule in the Senate upends the Framers’ intentions: It places too great a check on the House—without the House’s consent. More specifically, it inflicts an institutional injury on the House, as the “active principle of government” that the House is unable to redress. This is exactly what worried James Madison, Alexander Hamilton, and others who bitterly criticized supermajority rules.

Yes, as defenders of the filibuster point out, the Senate has a right to make rules as to its own proceedings, but trifling with majority rule crosses textual red lines. Beyond the aforementioned Vice President Voting Clause in Article 1, Section 3, there is also the “Presentment Clause” of Article I, Section 7, which says in two places—yes, twice—that any bill or resolution passed by the House and Senate, “shall, before it becomes law, be presented to the President,” and if sent back, then it must be “approved by two thirds of each House.” The Presentment Clause would make no sense if the Senate required more than a majority to send it to the president in the first place. Finally, there is the Enumeration of Super Majority Rules, the seven times in the text of the Constitution that specifically lay out where and when a supermajority is expressly required.

One might nevertheless ask, why not by majority rule permit Congress rule by supermajority? Of course this is an academic question—for Congress, by vote of both Houses, has never adopted a supermajority rule. The filibuster is simply a rule of the Senate, which has the effect of limiting the ability of the Congress to act. But Congress itself has never approved it. Yes, there has long been a cloture rule for the so-called “talking” filibuster. In 1917, the Senate adopted such a rule, which then required a two-thirds vote—now reduced to three-fifths. And while this rule did have a disgraceful and pernicious effect in race-related matters, the talking filibuster of old only on rare occasions held up a majority vote, maybe once or twice a year or not at all. But in our time, the talking filibuster for which the rule was intended is gone; no one has to talk to block a bill. And what was a procedural rule to get to a vote faster is now a rule that stops a vote from happening at all.

No, Congress has not adopted and never would adopt such a rule. Why would the House consent? As it now exists, it lets the Senate place a much greater check on legislation passed by the House than the Framers ever intended. It’s bad enough that this upsets the balance of power between the Senate and House, but it also upends the balance of power between the federal government and the states. The Senate, representing the states, is blocking the House, representing the people.

For the sake of argument, let us assume the text of the Constitution is less explicit than it actually is. Allowing Rule 22, which bars a vote by the majority without even active debate, still violates two fundamental canons of constitutional interpretation. The first canon, or rule, is the expressio unius principle—listing the exceptions for supermajority implies the exclusion of all others. That principle is basic in constitutional interpretation. In the case of Powell v. McCormack, the Supreme Court barred the U.S. House from excluding Adam Clayton Powell as a member because of “unethical conduct.” That was not one of the bases listed in the Constitution, and the listing of those bases implied the exclusion of others.

Additionally, to allow the Senate to add a supermajority rule would violate a second canon, the so-called Federalism Canon—which calls for the balance between federal and state power to be left alone. The filibuster changes the relative balance of power between the Senate, representing the states, and the House, representing the people. It is no accident that in blocking voting rights legislation, it is being used to protect the states from being regulated.

Harris, as chair, could reach the same conclusions. Rather than just hope a Senate majority uses the “nuclear option” to rid us of the filibuster, she could press the button. For the reasons above, she could declare the supermajority for cloture to be in conflict with Article I.

She may fail in the attempt. A majority can overturn a ruling of the chair. It is not so easy even for some Democrats in the Senate to give up the filibuster. There are many, many other bills that the senators take up other than voting rights legislation. So individual senators are caught in a dilemma worthy of a class in game theory—though glad to remove it for A, they do not want to remove it for B, or maybe C, or maybe D, or maybe an unknown X that will arrive later in their six-year terms. So the filibuster remains in place forever—except now for the budget and for nominations to judgeships and political positions. In these two cases, the budget and nominations, there is no choice but to get rid of the filibuster or there would be institutional collapse of the courts and of the executive branch.

However, with the John Lewis Act and Freedom to Vote Act, we are speaking about the institutional collapse of democracy itself. Protecting the integrity of federal elections from state interference is necessary to the integrity of the federal government—it is an obligation that is set forth in the original Elections Clause, Article I, Section 4. It is the only clause, the only text, that says Congress can override any state regulation of a federal election. Ever since 1787, Article I, Section 4 has been in there, the original nuclear option, to protect the national government from institutional collapse. It is an outrage to use the filibuster to block even the power of the national government to save itself. Surely that must have at least the same priority as enacting a budget by majority rule.

Let the vice president show some muscle in defense of her country. Let the debate start on January 17 with a ruling from the chair that Rule 22 is in conflict with her own right to cast a vote when the Senate is evenly divided. Then let her dare the Senate to overrule her. To reclaim the right to vote in the blocked legislation, she should begin with reclaiming her own right to vote, as well.

By a quirk of history, the plot against America is now also a plot against a Black woman’s right to vote. Who says the vice president has nothing to do?