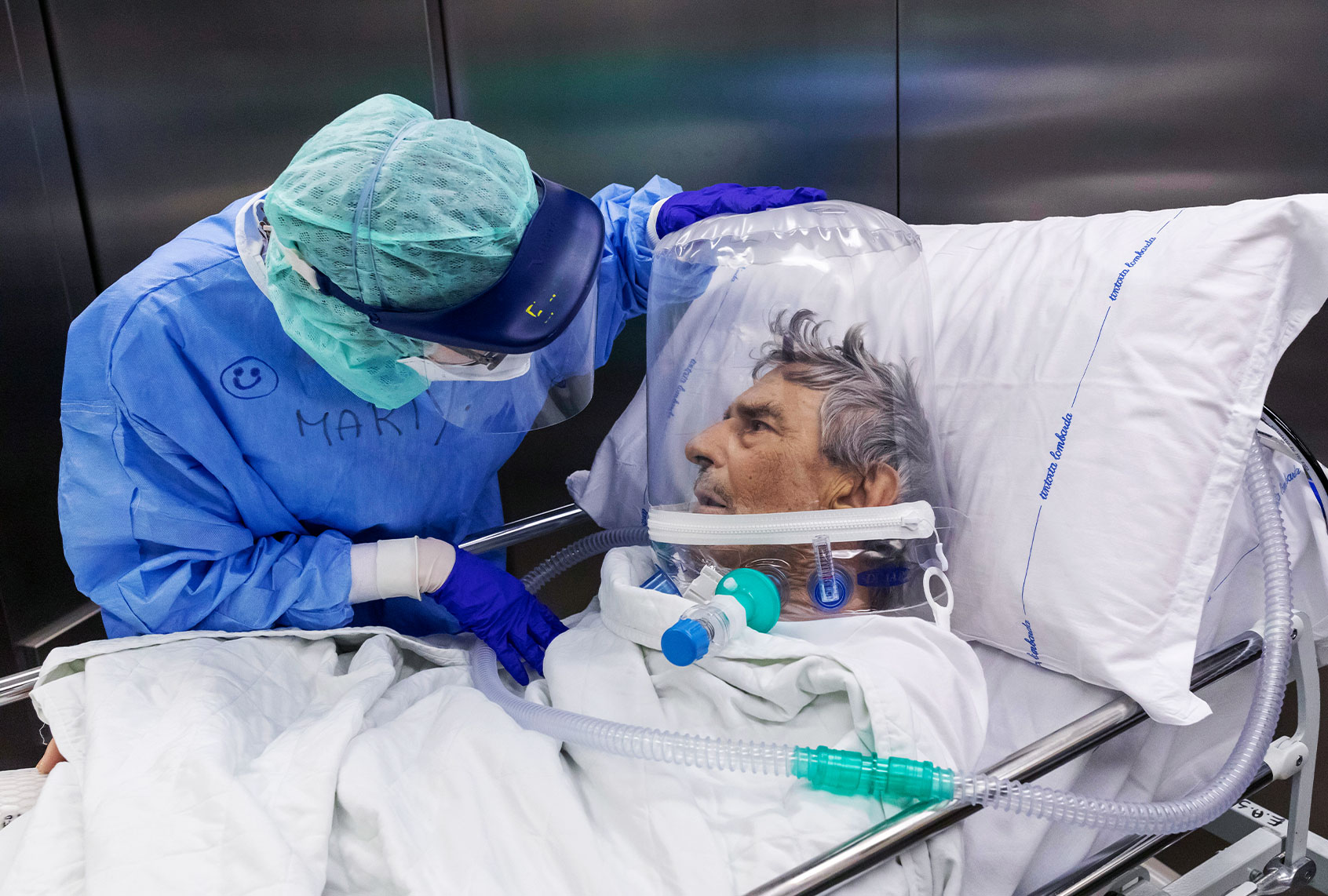 Critics of evolution often argue that life, rather than gradually changing over the years through natural selection, was actually created by a so-called “intelligent designer.” Their position is that the biological machinery which makes up living bodies is so complex, and so perfectly calibrated to support our numerous needs, that it had to have been planned out by a deliberate and thoughtful force of some kind.

Yet if God actually did design human bodies according to a plan, they forgot to make sure that we can breathe while we sleep — a remarkably crucial detail to overlook.  While not everyone suffers from the aforementioned anatomical glitch, known to doctors as obstructive sleep apnea,  it affects 22 million Americans — and has become an even more hazardous condition amid the spread of a deadly virus that attacks the lungs.

To understand this fault in the human blueprint, imagine your upper airway as a tube that must remain open to do its job. (This is a simplistic reduction for the purpose of analogy.) When you’re awake and upright, the tube stays open easily. Yet once you recline — say, to sleep — one’s muscles around that tube start to relax. The apparatuses around the tube — including one’s tongue and soft palate — can press down and constrict it, interfering with the smooth passage of air, akin to a kink in a hose. When one’s breathing is reduced, this condition is known as a hypopnea; if one’s breathing stops altogether, it is called an apnea.

To the people in proximity to the sufferer, the result is snoring, choking and other highly unpleasant sounds during sleep. The sufferers themselves are usually deprived of restful sleep and adequate blood oxygen levels, and their consequent lot in life can be one of abject misery: Constant daytime fatigue, headaches and living in a mental fog are just three of the most common symptoms. Over the long term, sufferers are at a high risk of heart disease, Alzheimer’s disease, strokes, high blood pressure, diabetes and a number of mental health ailments. For a large percentage of the patient’s day, their body endures the stress of repeatedly coming close to suffocating, as well as the weariness of never being allowed recuperative sleep.

Why does this happen? In children, the culprit is frequently obstructions from the adenoids or tonsils, and the solution can be as simple as an operation. Obese people may be at a higher risk for sleep apnea, since excess fat deposits around one’s throat and chest can further restrict nighttime breathing. Aging is a factor, too, as aging causes one’s throat muscles to weaken. Those who make lifestyle choices that weaken the respiratory system, such as smokers, are at higher risk. Finally, some merely have genetic or anatomical predispositions that, for one reason or another, mess with the proper working of the structures in the upper airway.

There are treatments for sleep apnea, the most notable of which is the CPAP, or continuous positive airway pressure, machine. CPAP machines work by keeping the upper respiratory tract open with a constant level of air pressure greater than atmospheric pressure. A patient attaches a nasal mask, a face mask or nasal prongs to their airway, and a machine uses water to create a regular pressure stream that persists throughout the patient’s sleep. While the apparatus can be difficult to adjust to, those able to make the transition often report significant relief. Many patients say that using a CPAP completely changed their lives, restoring their physical and mental vitality literally overnight. (CPAPs have been in the news lately because of a manufacturing issue in the CPAP machines made by Phillips Respironics has put certain customers at risk of cancer; the company has issued a recall.)

So how did nature bring us to a point where, for millions of people, the only effective way to breath while sleeping (aside from major surgery) is to literally force air down their throats? How did evolution let this happen?

The answer, as it turns out, has to do with evolutionary trade-offs. Humans evolved to be highly intelligent, walk upright and communicate through complex vocalizations. Those gifts came with a price.

As Allen J. Moses, Elizabeth T. Kalliath and Gloria Pacini wrote in the dental journal Dental Sleep Practice, lower animals are fortunate to have “evolved structures of nearly perfect design” for tasks like breathing, swallowing, smelling and chewing. Humans, by contrast, need to balance a large cranium (housing a large brain) on a spinal column that remains vertical to the ground to allow them to walk on two legs. They also need equipment in their necks that permit them to produce sounds for talking, and those organs take up more of the already-limited amount of real estate near the throat. The tongue, for instance, descends deeper into a human’s neck than it does for any other mammal. Even pioneering biologist Charles Darwin was aware of the absurdity of evolution in allowing food to potentially go down the wrong pipe in your throat; “every particle of food and drink we swallow has to pass over the orifice of the trachea with some risk of falling into the lungs,” he wrote.

If the human body were a building, our neck would arguably be the most poorly conceived room in the house, overflowing with functionally mismatched organs stuffed there to accommodate other design priorities. “Significant evolutionary changes to the human head are flat face, smaller chin, shorter oral cavity, changes in jaw function, repositioning of ears behind jaws, ascent of the uvula and descent of the epiglottis, right angle bend in tongue, creation of compliant, combined, flexible airway-footway, and speech,” the researchers write in the aforementioned journal.

Perhaps in part because scientists assumed humans could not possibly have such an absurd inherent design flaw, the symptoms of these structural deficiencies — most conspicuously snoring — were for centuries perceived as innocuous or, at worst, merely annoying. It wasn’t until the mid-20th century that scientists began to figure out that those periods when sleeping people struggle to breathe actually pose a serious health problem. Even then, a common approach was to perform a tracheotomy, a drastic measure in which a hole is punched into the throat to facilitate breathing. The CPAP was invented after one patient refused to undergo the procedure but was willing to try his doctor’s new air-pressure machine. Chronically unable to sleep before using the world’s first CPAP, he reported feeling utterly refreshed the following morning. Humanity’s architectural flaw had been exposed.

Before long, Japanese scientists were learning how even minor alterations in the size and position of the pharynx drastically altered the likelihood of developing a sleep disorder. Scientists were even figuring out the precise role of obesity in contributing to the disorder. (Obesity enlarges tissues in the already cramped throat.) Within decades, obstructive sleep apnea has become a common diagnosis and a main condition that sleep health professionals look for in their patients.

These problems existed before the COVID-19 era and, despite being worsened by the pandemic, will almost certainly persist after it is over. After all, obstructive sleep apnea has been a literal and figurative pain in the neck for as long as humans have had necks as we currently know them. Aside from the immediate knowledge humans have acquired about our own anatomical deficiencies, the existence of obstructive sleep apnea is a reminder to embrace humility. Millennia after the ancient Greeks created modern medicine, we are still learning surprising new things about the bodies we inhabit every day.