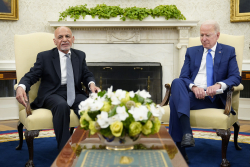 In 2019, I wrote a book called “The Media Matrix” and subtitled it pessimistically, “What If Everything You Know Is Fake?”

Now, two years later, we can remove the question mark. Everything you know is fake — if you depend on the mainstream media to educate you.

Everywhere you turn, you will encounter coverup, corruption and confusion in the media. If it isn’t an intentional disinformation campaign, then it’s the result of laziness and stupidity. Either way, the fourth estate has become a fifth column of provocateurs and saboteurs.

Examples abound. Two weeks ago, for instance, I wrote about how the supine media had to bear some responsibility for the disgraceful withdrawal of U.S. forces from Afghanistan. Reporters had the facts weeks before the Aug. 31 deadline, and they refused to pursue them, presumably out of concern that hard questioning would make the Biden administration look bad.

It got me thinking. Just how much does the media’s explicit bias against conservatives skew the public conversation on which the entire success of democracy depends?

The current disaster in Afghanistan remains a good place to start. Much mainstream reporting has covered up for Biden’s policy failures, paying little attention to the Americans left behind in the country or minimizing the risk to them. News outlets have also made a conscious choice to turn away from the fallen heroes who died in Kabul and the suffering of their grieving families.

Take the case of Shana Chappell. She is the Gold Star mother of Marine Lance Cpl. Kareem Nikoui, who died in the suicide bombing at the Kabul airport. After meeting Biden during the dignified transfer of her son’s remains at Dover Air Force Base in Delaware, Chappell took to Facebook to write this:

“I got to have words face to face with that POS Biden! He’s a coward! My son Kareems body will be returned to norco [Calif.] in 7-10 days so i can lay him to rest! The day after i lay him to rest i will be leaving from Norco in my Blue Toyota Tundra to head to the White House. I will be going to the White House to demand that the traitor POS Biden resign and take his whole corrupt admin with him!”

The idea of a Gold Star mother confronting a president about the needless death of her son would seem to be news. We know it is news because back in 2005, Cindy Sheehan had the media spotlight cast on her when she became an outspoken critic of the Iraq War and the presidency of George W. Bush. Sheehan told reporters: “I want to ask the president, ‘Why did you kill my son? What did my son die for?’” In response to her attempt to shame a Republican president, the national media turned her into a celebrity.

By comparison, Chappell was barely noticed by the mainstream media when she accused Biden of killing her son. Her social media accounts were temporarily blocked, and if you watch CNN or MSNBC you would hardly even know she existed. Other than from conservative media outlets, there has been no interest in her plan to demand Biden’s resignation.

Nor, for that matter, did the Gold Star fathers receive any better treatment. What a difference five years makes! Remember how Gold Star father Khizr Khan was lionized by the press as a result of his appearance at the 2016 Democratic convention? His Muslim son had died fighting for the United States in Iraq in 2004, and Khan criticized then-candidate Donald Trump for his views on halting immigration from Islam-dominated countries that harbor terrorists. Mind you, this was just a political dispute. Trump had nothing to do with the death of Khan’s son, but the media seized on the proud father’s grief as a weapon to be used to stop Trump from reaching the White House.

How different was the treatment of Gold Star fathers Darin Hoover and Mark Schmitz, who accused Biden of disrespecting their sons during the ceremony at Dover Air Base by checking his watch every time a flag-draped coffin was removed from the hold of the Air Force C-17 Globemaster.

Schmitz called it “the most disrespectful thing I’ve ever seen.”

When they and others publicized their claims about Biden’s callous behavior, USA Today decided to do a “fact check” and concluded that the survivors’ story was “partly false” and “misleading” because Biden had only checked his watch after the ceremony was over.

That was a blatant lie, as footage shows him glancing at his watch multiple times during the transfer. So how do you account for a major newspaper doing such a totally misleading “fact check” —   short of actual malice towards, if not the Gold Star fathers, then the truth? Equally insulting was the fact that USA Today — after receiving vigorous criticism — changed its fake fact check to “missing context” on the grounds that when Biden wasn’t being disrespectful, he was actually doing a pretty good job of looking like he cared about the dead service members.

Of course, most of the media couldn’t be bothered to cover this incident at all. To do so would raise questions about the character of their beloved president, the healer-in-chief. That would be unacceptable. Let’s face it. To the caretaker media who surround Joe Biden, the president is the equivalent of Harry Potter’s “Lord Voldemort,” with this slight variation: Biden is “He who must not be shamed.”

Does all this seem trivial? It’s not. Our information-drenched society receives its cues from the raised eyebrows and outraged tones in the voices of Rachel Maddow and Don Lemon. If they and others like them don’t talk about it, then it never happened, or it’s a right-wing conspiracy theory. Whether it’s election fraud, coronavirus cures, or Marxist infiltration of our social institutions, the media elites are the gatekeepers who determine what will be taken seriously and what will be dismissed with a smug laugh.

One final example from the Afghanistan debacle goes well beyond a mere matter of shaming Joe Biden, and raises questions about his fitness for office. That may explain the mainstream media’s near total lack of interest.

I am referring, of course, to what we recently learned about Biden’s shocking July 23 phone call with Ashraf Ghani, who was then president of Afghanistan. We knew about that phone call way back when it happened. In fact, when you look at the White House’s official readout of the call, you get almost nostalgic for the good old days when the U.S. and Afghanistan were reaffirming their “enduring bilateral partnership” that lasted another three weeks till Ghani fled his palace and his nation.

But the official story, not unexpectedly, didn’t tell the whole story. For that, we had to wait until Aug. 31, the day after America’s military withdrawal was completed, when Reuters, the international press agency, released the transcript of the July 23 call. What we learned is that Biden did not really believe his own rosy picture that he was painting for the American people about the future of Afghanistan.

“Hey look, I want to make it clear that I am not a military man any more than you are,” he told Ghani (pictured, above, with Biden). “But I have been meeting with our Pentagon folks, and our national security people, as you have with ours and yours, and as you know and I need not tell you, the perception around the world and in parts of Afghanistan, I believe, is that things aren’t going well in terms of the fight against the Taliban. And there’s a need, whether it is true or not, there is a need to project a different picture.” (Italics added.)

Not only does this transcript raise questions about Biden’s misleading statements to the American people about the risks involved in getting all Americans out of Afghanistan, but it is followed up by Biden trying to pressure Ghani into accepting a quid pro quo — if you change how the world perceives the battle against the Taliban, we may be coaxed into continuing to provide military air support. Indeed, Biden’s repeated emphasis on “perception around the world” makes him sound more like a PR flack than a commander-in-chief.

Obviously, someone in the State Department or the White House was concerned about this exchange or they wouldn’t have leaked the transcript, but most of the media just yawned. Do a Google search for “Biden phone call with President Ghani,” as I did, and you will find all the major journalism outfits missing in the top results. Beyond Fox News and USA Today, most of the results are from small conservative websites or international outlets like India Today or the Hindustan Times. You won’t find any stories from major news outlets, including CNN or NBC, in the top 100 results, and I get the feeling you could scroll till doomsday without seeing any interest from the New York Times or Washington Post.

How extraordinarily different was the response when the transcript of a President Trump phone call with the president of Ukraine was leaked! That led to an impeachment trial, but of course that was a Republican president, and the rules are different for Republicans, aren’t they?

You can bet that any Democrat who has read this far in my column will dismiss the whole idea of impeaching Joe Biden over his phone call with the Afghani president as one more wild-eyed conspiracy theory.

Makes me wonder. If Biden, Ghani and U.S. military leaders conspired together to mislead the world — and in particular the American people — about the true conditions on the ground in Afghanistan, then it really isn’t a conspiracy “theory,” is it? I prefer to call it a conspiracy “fact.”

Too bad the unindicted co-conspirator in this, and in so many other crimes against the people, is none other than our faux friend — the mainstream media. Somehow the story of their involvement never gets told. What a racket!

Frank Miele, the retired editor of the Daily Inter Lake in Kalispell Mont., is a columnist for RealClearPolitics. His new book, “What Matters Most: God, Country, Family and Friends,” and his earlier books are available from his Amazon author page. Visit him at HeartlandDiaryUSA.com to read his daily commentary or follow him on Facebook @HeartlandDiaryUSA or on Twitter or Gettr @HeartlandDiary.