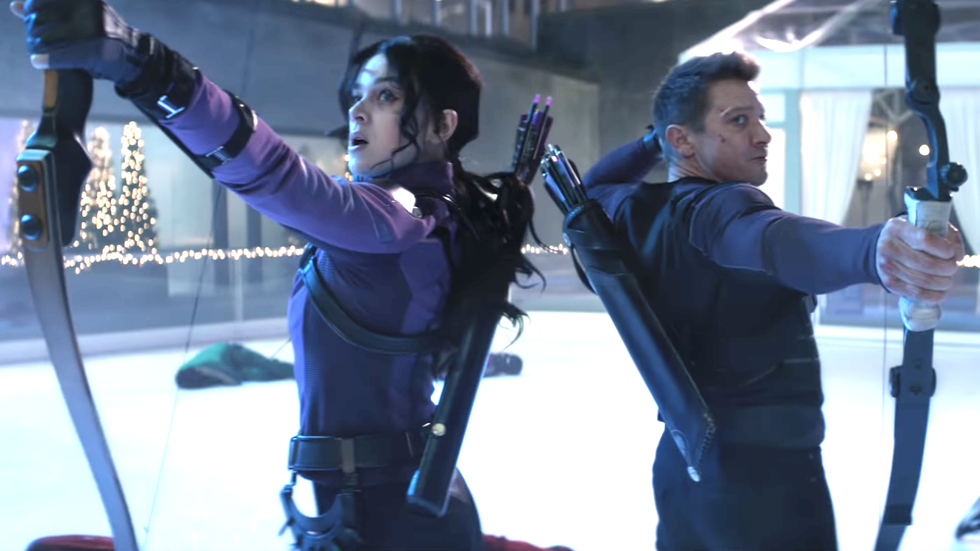 It’s hard to believe, but Marvel has already released four series to kick off the fourth phase of the MCU (alongside the two feature films, Black Widow and Shang-Chi). WandaVision, The Falcon and the Winter Soldier, Loki, and What If…? Have transitioned us from the decade long buildup of Avengers: Endgame and into uncharted territory. We’ve only seen a few of former Avengers (and their adversaries) find new footing in a world without Captain America, Iron Man, and Black Widow.

Through Marvel’s Disney+ shows, we’re starting to get origin stories for some of our favorite characters to finally come into their own. Wanda Maximoff is really leaning into the whole Scarlet Witch title, Sam is officially the new Captain America (Bucky is also there, I guess), and Loki isn’t just a silly little anti-hero anymore, but a three-dimensional character. To close out the year and continue with standalone, character-enriching stories, Marvel is gearing up for a Hawkeye series.

Let’s be honest, Hawkeye is probably the least popular of the Avengers. Without a standalone film, and limited screen time, it’s hard to get excited about Clint Barton. In theory, an arrow-shooting assassin sounds pretty cool. But standing next to a giant green man and the Norse God of Thunder? He’s just some guy. With a wife and kids. Hopefully his new show will change that.

With a newly released trailer, it looks like Marvel wants to make Clint more than that guy that shoots arrows and is also friends with Black Widow. He’ll be in an action-packed, holiday-themed special, and even have a new character at his side to possibly pass the Hawkeye baton.

Here’s everything we know about Hawkeye.

When is Hawkeye Coming Out?

Hawkeye is premiering on Disney+ on November 24, 2021. The show will consist of just six episodes, and will conclude on December 29. It follows Loki and The Falcon and the Winter Soldier with a short-run, versus the 9-episode season (albeit with shorter episodes) that WandaVision received.

Jeremy Renner is reprising his role as Clint Barton, the arrow-shooting assassin known as Hawkeye. Marvel newcomer (and Oscar-nominated actress/hit recording artist) Hailee Steinfeld is joining as Kate Bishop, a character with a rich comic history as Barton’s protege. Vera Farmiga will star as Kate’s mother, and there’s a host of other characters, including an expected return appearance for Florence Pugh’s Yelena Belova, first introduced in Black Widow.

What will Hawkeye be about?

After the events of Avengers: Endgame, it looks like Clint has all but hung up the Hawkeye mantle and is determined to lead a normal life. That is, until the sins of his life during the Blip (the five-year period when the 50% of life Thanos snapped out of existence were all gone) come back to haunt him. Remember—he had begun murdering people (bad people, but still, the guy went on a straight-up killing spree). It’s not clear exactly what yet, but something causes him to pick up the quiver and arrows for one last job. On the way, Kate Bishop (Steinfeld) finds him, and the two embark on a quest to get Hawkeye home in time for Christmas. Ho ho ho.

The series appears to be largely inspired by the Hawkeye comic run that was written by Matt Fraction with art by Matt Aja. It’s one of the most beloved Marvel Comic runs of the past decade, and, without spoiling too much, basically centers on Clint Barton as a cynical dad living in Brookyn, and training Kate Bishop as she tries to become the new Hawkeye.

The Marvel Cinematic Universe doesn’t usually do 100% direct adaptations, but based on the trailer it really does seem like this will be the direction this short series plans to go in.

Milan Polk
Milan Polk is an Editorial Assistant for Men’s Health who specializes in entertainment and lifestyle reporting, and has worked for New York Magazine’s Vulture and Chicago Tribune.