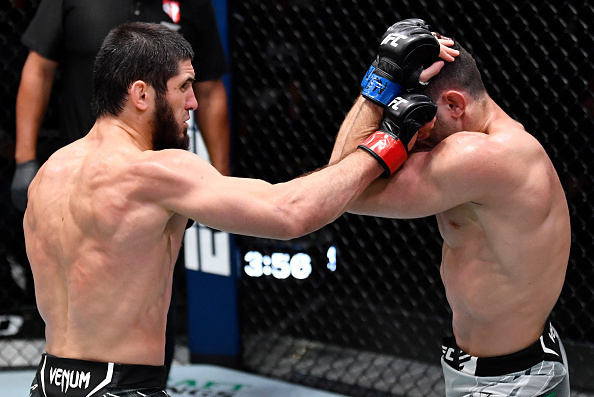 Another Saturday. Another night in Las Vegas.

Just a week after the controversial Conor McGregor circus came and went at the T-Mobile Arena, the UFC was back at its Apex facility home base for a 10-bout card topped by a pair of ranked lightweights.

Ranked ninth and 14th at 155 pounds, respectively, Islam Makhachev and Thiago Moises headlined the card with designs on raising their profiles in one of the promotion’s hottest weight classes.

Makhachev is a self-professed disciple, friend and training partner of retired lightweight kingpin Khabib Nurmagomedov, while Moises entered the match having won three straight and four of six in the UFC since graduating from Dana White’s Contender Series in 2018.

The co-main event featured an interesting matchup of its own, with former bantamweight champion Miesha Tate making her first appearance in nearly five full years against 44-year-old Marion Reneau, who announced before the fight that it would be her last in a career that stretches back to 2010.

An 11th bout between bantamweights Miles Johns and Anderson Dos Santos was canceled due to COVID-19 protocols.

The show was broadcast live by ESPN, whose announce crew of Jon Anik, Michael Bisping and Paul Felder was augmented by Heidi Androl doing backstage features and breaking news pieces.

And it wouldn’t be a big MMA event without the B/R combat sports team, which was in its typical weekend position to put together the authoritative list of the card’s real winners and losers.

Click through to see what we came up with and let us know your thoughts in the comments.

No. He’s not Nurmagomedov.

But with every appearance in the Octagon, Makhachev gets a little closer to his hero’s preeminence.

“There’s a lot of people in the lightweight division thinking ‘I might want to sidestep that guy.'”

Though Moises entered the fray as a superior kickboxer who’d prefer a stand-up bout, Makhachev continually came forward and made the Brazilian uncomfortable with pressure. He held his own in terms of strikes and scored takedowns in each round, gradually draining Moises’ gas tank through 15 minutes.

He went for the win shortly into the fourth, scoring a takedown with a slam and immediately getting to his opponent’s back. He eventually snaked his left arm under Moises’ chin and prompted the 26-year-old to tap and draw a rescue from referee Herb Dean at 2:38.

It was the first main-event appearance and the first foray past three rounds for Makhachev, who’s not lost since a first-round stoppage at UFC 192 in 2015. He’s scored three submissions, a knockout and four decision wins during the streak and seemed poised to rise beyond the No. 9 ranking he arrived with.

“It was a good experience. He was a tough opponent,” Makhachev said.

“I tried to finish him all four rounds. I feel very confident from a striking position, but I had to listen to my corner and they were telling me to take him down.”

Makhachev landed a dominant 148 strikes to just 18 for Moises, including a 61-13 advantage in significant strikes. He also scored three of the fight’s four takedowns and had 8:11 in control time.

He specifically named former lightweight champ Rafael Dos Anjos in a post-fight callout, but blanketed the whole division with a final challenge.

The 44-year-old Reneau announced before her co-main event with ex-champion Tate that it would be her last fight and she headed into it with the intention of authoring a fairy-tale finish.

So much for fairy tales.

Instead, it was Tate, making her first appearance in 1,709 days, who looked ready to add a few more chapters while dominating throughout on the way to a third-round TKO finish.

“I’m glad I went out the way I did. I’m glad I was allowed to fight my fight in the cage,” Reneau said. “I’ve never stopped being a fan of (Tate’s). I’m going to cheer her and everyone else in the bantamweight division. It’s going to be amazing.”

The loss was the fifth straight for Reneau at the tail end of a UFC run that began in 2015.

She was 4-1 as a pro when she arrived to the Octagon, then went 5-2-1 in her first eight fights with the promotion before the tailspin began with a decision loss to Cat Zingano in 2018.

Tate became the first fighter to beat Reneau inside the distance and in doing so returned to relevance in a weight class she ruled after defeating then-champ Holly Holm at UFC 196 in March 2016. She lost the belt to Amanda Nunes in her next fight four months later and hadn’t fought since losing a subsequent bout to Raquel Pennington in November 2016.

Inactivity or no, Tate appeared close to vintage and controlled each round with superior striking and consistent pressure that allowed her to get Reneau to the ground multiple times. She bloodied Reneau’s nose with ground strikes in the second round and continued the unfettered punishment in the third, forcing Reneau to surrender her back and continuing to land until Mark Smith intervened at 1:53.

“I’m back. I’m so happy. This has been a lot of hard work a lot of self-discovery in the process,” Tate said. “I’m not here for a fight. I’m here for a belt. It’s five years in the making to get back in here.”

And though only those fluent in Polish likely understood his words, it was clear to see his delight.

“I’m chasing my dream,” he told Felder moments later. “I will be the champion in the future. I don’t know when. But it will happen.”

The lightweight entered his bout with veteran Jeremy Stephens as an unranked underdog, but emerged as a commodity in the 155-pound division after forcing him to submit to a left-arm kimura in just 65 seconds.

“I was hearing my coaches saying ‘This is your favorite position. Stay patient. You’ll finish this.'”

Stephens dropped to his belly to offset Gamrot’s double-leg takedown attempt, but Gamrot was able to keep hold on a leg as Stephens tried to twist away. Instead, he fell to his back as Gamrot seized his left wrist and bent it backward, putting Steohens’ elbow and shoulder in distress and prompting a quick tap out.

Ask and you shall receive.

Well, at least if you earn it, that is.

Buffalo native Billy Quarantillo openly campaigned for a shot at a $50,000 performance bonus following his fight against Gabriel Benitez, and no one who’d watched the 13-plus minutes of action could argue.

The featherweights went at it with punches, knees and grinding mat work for nearly every moment of their scheduled three-rounder, but Quarantillo got the better of it on the way to scoring a TKO win just 80 seconds before the final horn.

Indeed, it was Quarantillo’s fourth win in five fights since appearing on the Dana White’s Contender Series show in 2019, and he was looking for the boss during a post-fight chat with Felder.

“I hate to ask for things. But you’re not gonna get it if you don’t ask for it.”

Now fighting out of Tampa, Quarantillo instantly asserted control in the first round when he dropped Benitez with a long right hand and followed up with a prolonged period of ground control from a body triangle position that included multiple strikes from behind and choke attempts.

A combination of punches led to another takedown and a similar body triangle stretch in the second, and Quarantillo seized the position again in third, cutting Benitez in two places along the way and raising a hideous swelling underneath the Mexican fighter’s left eye.

A cage-side physician allowed the fight to continue after examining the eye, but Quarantillo continued the punishment and ultimately drew the hand of referee Mark Smith at 3:40 of the third after landing a series of punches and elbows from the rear after again cinching up the body triangle.

The winner improved to 16-3 as a pro and is off to the U.S. Virgin Islands for his honeymoon next week.

“How often do you see that, stopped from strikes from the back? That’s impressive,” Bisping said. “It was the grappling and takedowns and the control and the damage. And the pace.”

Ladies and gentlemen, we have a strawweight phenom.

Brazilian bomber Amanda Lemos stamped her ticket to title-shot consideration in the 115-pound ranks with the most impressive stoppage on the entire 10-fight card.

Tall and rangy for a fighter in her weight class, Lemos used precision from the stand-up position to quickly and violently erase Montserrat Conejo with a jolting combination after just 35 seconds of Round 1.

The decisive sequence began when Lemos landed a powerful right hook that sent Conejo awkwardly lurching forward. Lemos missed a follow-up right hand but connected on a subsequent left hook that sent her opponent tumbling to the mat.

One powerful ground strike followed and prompted the intervention of referee Chris Tognoni, though Conejo was able to pop up and appeared interested in rejoining the fight.

She was still glassy-eyed, however, and had to be helped to her stool by a cage-side doctor once she returned to her corner.

It was the second-fastest finish in UFC strawweight history and the win, her fourth straight with the promotion, gave Lemos the third-longest active win streak at 115.

“We talked about the power as she was walking in,” Anik said. “The snap. The accuracy.

“We could have a strawweight star on our hands. Amanda Lemos is for real.”

She was ranked 14th in the division entering the fight and is expecting a quick rise.

“Give me someone in the top five. Anyone,” Lemos said. “I will be the champion.”

No, make that a perpetual motion octopus with a mean streak.

That’s what Khalid Taha was up against on Saturday night.

Kazakhstan-born bantamweight Sergey Morozov played the role of punishing non-stop cephalopod across 15 violently grinding minutes, running his Lebanese foe through the wringer on the way to a wide decision win.

The 5’6″ Morozov had moderate advantages in both overall strikes (99-66) and significant strikes (50-33), but did the majority of his damage on the mat—scoring six takedowns in 16 attempts and racking up more than eight-and-a-half minutes of ground control time.

Taha spent time on the floor in each of the first two rounds, and the consistent pressure from both vertical and horizontal positions gradually left him too fatigued to stage a dramatic rally come Round 3.

In fact, Morozov kept his man on the floor for better than half of the final five minutes (2:43 to be exact), too, and earned shutout nods of 30-27 from all three judges.

“Our game plan was to start with grappling and wrestling, make him tired and then try to finish the fight, but he was tough and it was hard to finish him,” Morozov said. “I landed very good shots and I could see I wobbled him, but he never lost his concentration and recovered pretty quickly.”

The win was Morozov’s first in the UFC after a second-round submission loss to Umar Nurmagomedov in his Octagonal debut in January. He’s 17-4 overall and has won six of seven since the middle of 2018.