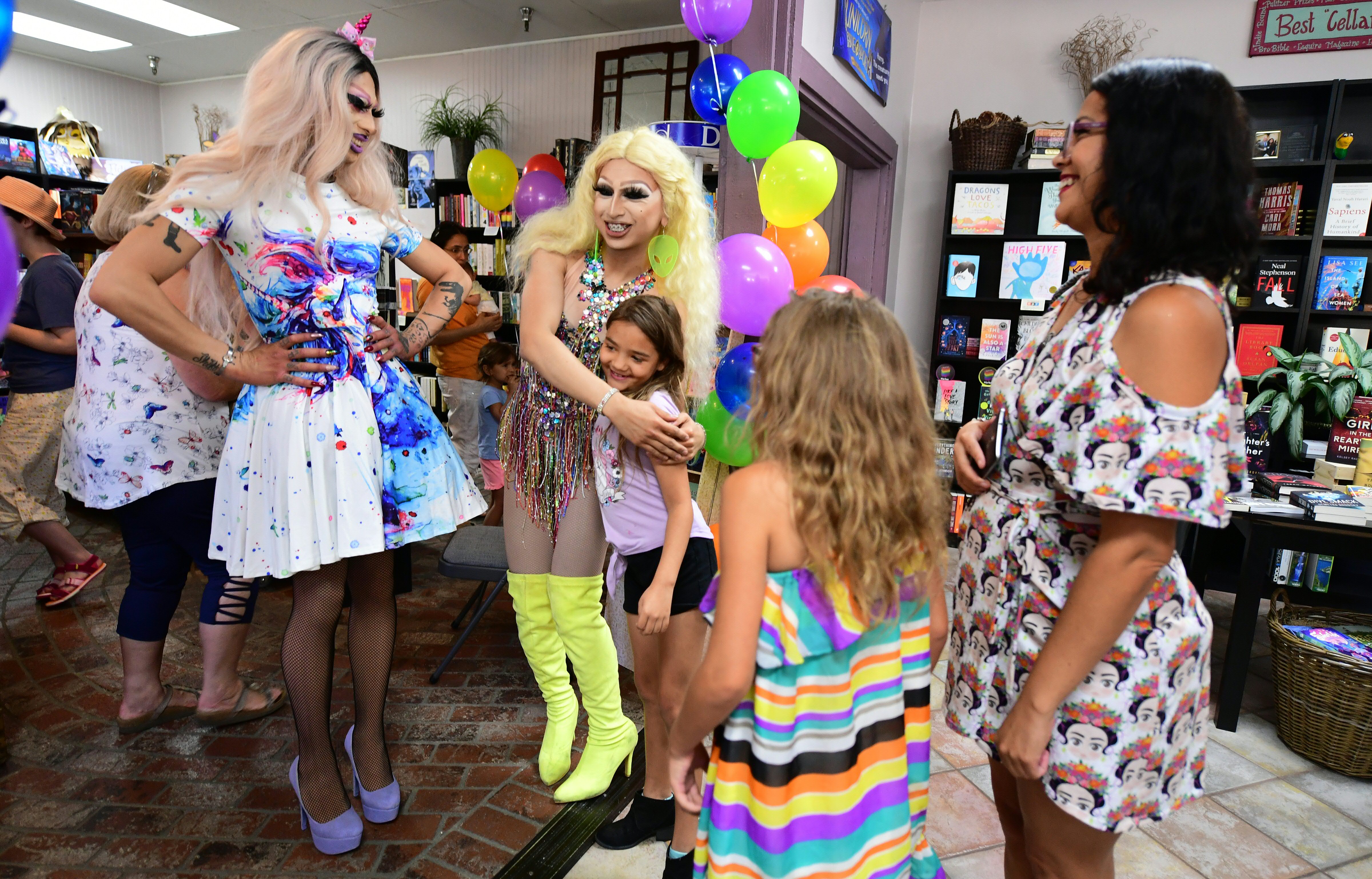 Back in the summer of 2019, when a collection of Fox News personalities and unfamous anti-LGBTQ activists seized on their newest moral panic, it may have seemed like a miscalculation or a joke. What vexed and quite publicly obsessed them: a handful of events in public libraries at which parents brought kids to hear drag queens read aloud from children’s books. Two years later, the right is seeing the results of what some had hand-waved as a culture war: at least 35 state-level bills meant to block access to gender-affirming health care for trans youth, according to the Human Rights Campaign and Freedom for All Americans, along with dozens of other bills meant to exclude trans kids from student athletics, by far the most anti-trans legislation seen in a single year. Last week, the Texas state Senate passed one of the most extreme of these bills, SB1646, which would define “administering or supplying, or consenting to or assisting in the administration or supply” of puberty blockers and “performing or consenting to the performance” of gender-confirming surgery to minors as child abuse.

When a member of the Texas chapter of MassResistance, a national anti-LGBTQ group which the Southern Poverty Law Center considers a hate group, testified in favor of SB1646, he said that the bill did not go far enough—that it should ban trans people from socially transitioning, too. The bill was sent over to the Texas house on Wednesday. That night, in his first joint address to Congress, President Biden said, “To all the transgender Americans watching at home, especially the young people who are so brave, I want you to know that your president has your back.” Kai Shappley, a young trans girl who testified against the bill, asked on Twitter after Biden’s speech, “I’m very thankful for this. But what does having my back mean? Like, if the bills pass in Texas, will you keep them from putting my mom in jail?”

The reason that an anti-LGBTQ group, one that appears to consist primarily of a handful of activists and a blog, is successfully pushing legislation that could potentially designate Shappley’s mother as a child abuser is that it has spent the last few years priming conservatives to act on its rhetoric, no matter how bizarre, hateful, or salacious.

In June 2019, when parents and kids entered a Drag Queen Story Hour event in their public library, it was likely not the first time at least some of them had some pop culture exposure to drag performers: RuPaul’s Drag Race, the Emmy-winning reality competition show, was in its eleventh season while Pose, a show fictionalizing the ballroom scene of the 1980s and ’90s, was in its second season on FX. That same summer, on Fox News, anchor Martha MacCallum ran a segment on opposition to Drag Queen Story Hour, featuring the mothers who, in her words, “say they aim to indoctrinate and unnecessarily expose children to sexuality.” It was one of many such stories that would fan out across the right-wing mediaverse.

MacCallum looped a few seconds from one video of one drag queen in a houndstooth drill team uniform making a grand entrance, while saying protests at such events had become so “heated” that “SWAT teams” were called in to “provide security.” The short video was credited to Lynn Meagher, an anti-trans activist who appeared on the segment; now that activist’s rhetoric is helping drive a multistate campaign to pass a host of anti-trans legislation targeting trans youth, their medical providers, and their parents.

“Well, I have unfortunately lost two of my children to the transgender cult,” Meagher told The Daily Signal in an interview at the Values Voters Summit in 2019. She has described trans people in grotesque terms, while also casting doubt on gender-affirming health care. Still, in 2020, The New York Times quoted her in a story about anti-trans bills that had recently been introduced in South Dakota. Meagher had presumably traveled from Washington and testified in the South Dakota House against one of the bills, which would have criminalized medical providers who offered gender-affirming care to minors. This April, she was in Texas, testifying in support of HB1399, a House version of the extreme bill that just passed the state Senate, spreading misinformation about trans health while arguing that physicians should be legally barred from providing gender-affirming care for trans youth.

For all her visibility in conservative and mainstream media, Meagher’s attempts to shut down Drag Queen Story Hour events in Washington State seem to have failed. “At one point, King County Sheriff Mitzi Johanknecht walked to the front of the room and said that, as a member of the LGBTQ community, ‘it’s inspiring to see everyone out here,’” a Seattle Times writer noted of one story hour in Renton, Washington, the same town where Meagher shot her video.

MassResistance highlighted Meagher’s efforts to shut down LGBTQ youth events at public libraries in Washington in 2019, using the controversy she helped stir up to mobilize people against the LGBTQ community. The group’s Washington chapter put out a sheet of talking points—claims that the events lead to the “sexualization” of young children, which they then falsely linked to “an epidemic of human trafficking”—with the dates and times of scheduled story hours, along with the names and contact information for the library trustees. Parents contacted MassResistance for help, the group stated: “The parents first wanted to protest the event. But instead, we told them that the best thing would be to get inside and take photos and video of what happens. They agreed, and we worked with them on planning for that.” Meagher’s appearance on Fox, which aired her video, was one result of this collaboration, and MassResistance claimed it as a victory: “Within a day it was covered in one way or another by several national conservative media outlets, from PJ Media to Fox News. Though those media focused on the drag queen part of it”—which, of course, MassResistance also focused on—“the mothers’ effort was still a success!”

Whether or not these anti-LGBTQ groups succeed in shutting down community events, they use them for propaganda and public shaming. MassResistance posted more content featuring the same performer in houndstooth who appeared in the video shown on Fox, also apparently recorded by the “parents.” Under one photo, they wrote, “All four [drag performers] shared their Twitter handles with the children, to follow their ‘careers.’ (That, of course, will lead children right into a triple-X-rated world of depravity and link them up with predators in that ‘community.’)” To save parents (and children) the effort, MassResistance created a PDF dossier rounding up photos they say came from the performers’ social media accounts. Within days of the Fox segment, members of the Proud Boys showed up at a King County library board meeting to back the anti–Drag Queen Story Hour activists, reportedly recording the faces and names of those who spoke in support.

The core elements these groups are using to advance anti-trans bills were all present in their attacks on Drag Queen Story Hours: associating drag with “sexualization” and “grooming,” interchangeably referring to drag and trans identity, depicting people who support LGBTQ youth as predators. Local activists help national groups feed these stigmatizing, false claims to outlets like Fox News, mobilizing others across the country. It gives adults a moral claim to debating the gender and sexuality of young people in equally voyeuristic and sensational terms. Today, by far, Fox News is dominating coverage of the proposed bills that would endanger trans youth, airing hours of anti-trans propaganda about women’s sports and “protecting girls.” Tucker Carlson is responsible for the most coverage of trans girls in sports on the network—14 segments in 2021 alone, according to Media Matters.

There is no drag queen conspiracy. Trans kids, however, are at risk of being denied life-saving care, losing their families, and facing systematic exclusion from education and athletics, under the cover of law and “child protection.” The propaganda machine that got us here was not operating in secret; it has been on cable news nearly every night. The horrifying and almost immobilizing reality is that none of this had to be true to work. None of it had to be carried off by media masterminds and wonks. Far-right extremist media, as Haley Mlotek writes at Columbia Journalism Review, “is designed to be absorbed rather than observed, a form of seeing that hides in plain sight”—and now, it is spreading throughout state legislatures, where Republicans can guess what condemnation might be waiting for them on Fox News or far-right hate blogs should they oppose these bills.