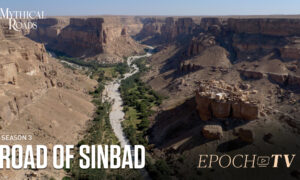 As elsewhere in the Arabian Peninsula, which the Romans called Happy Arabia, Oman has seen decades of prosperity thanks to oil revenues. From Muscat, the capital of the Sultanate, to Sana’a and Aden in Yemen, the desert is approaching, the mighty mountains are giving way to the sands, the spirit of the world is breathing.

A hundred kilometres from Salalah, in the Dhofar mountains, merchants of old loaded the precious frankincense onto camels to distribute it to the four winds of the East. Soothed by the fragrance of frankincense and khat, the road of Sinbad crosses the village of Wadi Do’an, one of those special places where man’s efforts are merely a continuation of the work of nature.

Whether remote or packed with tourists, recent or old, famous or forgotten, certain routes are paved with legends. This series explores itineraries that have made history across five continents—some roads and rivers that separated countries, and others that formed links, creating pathways for traders, fortune-seekers, evangelists, conquerors, and travelers. As historical symbols, these routes now ignite the imaginations of millions of people in search of adventure and freedom.

The original and poetic approach of this series casts a new light on these mythical roads. Throughout the journey, the routes unfold through the eyes of the men and women who live and work along them, and who continue to sustain the legends.