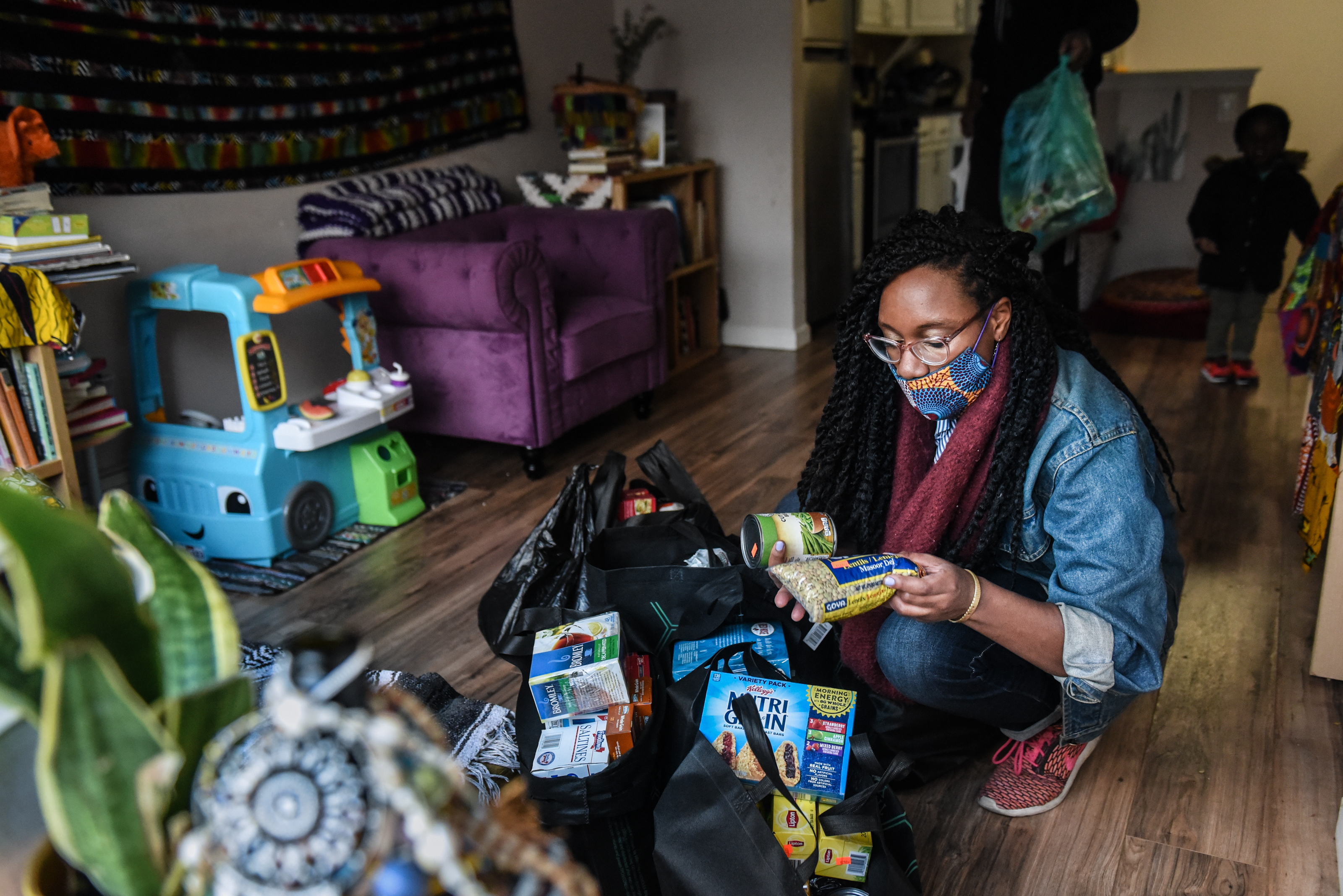 Well into the second year of the coronavirus pandemic, millions of Americans are still reeling from a number of compounding crises caused by the ripple effects of Covid-19 on the economy. The national situation appears grim. August and September saw weak job growth, in part due to the contagious delta variant leading to a recent spike in coronavirus cases. A record 4.3 million Americans quit their jobs in August, a phenomenon that some are calling the “Great Resignation,” led by workers in the food service and retail industries. Expanded unemployment insurance benefits expired last month, and a national eviction moratorium was recently overturned by the Supreme Court.

All of these conditions combine to further destabilize low-income families. One such undersung complication is the way the pandemic has exacerbated food insecurity, the lack of consistent access to nutritionally adequate and safe foods.

“​​Housing prices are increasing at a rate we haven’t seen since the height of the housing bubble in 2006. And necessities—things like cars and medication—don’t come cheap, either,” House Rules Committee Chair Jim McGovern said at the top of a roundtable on food insecurity on Wednesday. “Every dollar spent on costs like these, together with must-pay monthly bills, is a dollar that is often taken out of a family’s food budget.”

According to the Food Research and Action Center, or FRAC, levels of food insufficiency—meaning sometimes or often not having enough to eat—dipped among Americans in early August but have since risen in recent weeks, with Black and Latino Americans having higher levels of food insufficiency than the national average. FRAC notes that the cost of food is expected to keep increasing through the end of the year due to rising inflation. (The Labor Department reported on Wednesday that the consumer price index for all urban consumers, a critical inflation gauge, rose by 0.4 percent in September, with the greatest increase in “food and shelter.”)

The news is not without silver linings. Early data shows that the expanded child tax credit has aided families with children; the number of adults with children reporting that their household didn’t have enough to eat fell by 3.3 million between early July and mid-August. But the expanded credit is set to expire at the end of the year, which means that parents may not be able to rely on it for much longer unless it is extended by Congress, which is far from inevitable.

The overall stability in food insecurity levels may also be due to government efforts to assist Americans most likely to be adversely affected by the pandemic. Congress allotted funding for emergency food assistance and temporarily expanded food stamp benefits, and created the Pandemic-EBT program to help children unable to attend school in person who would have received free or reduced-price meals at schools. (A recent study by the Brookings Institute found that Pandemic-EBT reduced the share of families in households receiving Supplemental Nutrition Assistance Program benefits where children experienced very low food security by 17 percent.)

The Biden administration approved updates to SNAP in August, such that average benefits will rise more than 25 percent above pre-pandemic levels—the largest permanent increase in the program’s history. This increase began in October, coinciding with the end of expanded benefits that expired at the end of September. But SNAP does not reach every needy family; some households are low-income but still land above the threshold for receiving the benefits, while others are deterred by the significant bureaucratic hurdles in obtaining them.

Congressional Democrats are attempting to craft a massive bill that will include a number of priorities that indirectly touch upon food insecurity, including an extension of the child tax credit, the provision of free school meals and universal pre-K, and an expansion of health coverage. But the bill, which Democrats hope to pass through the complicated and unwieldy reconciliation process in order to circumvent a Republican filibuster, is far from finalized. There are ongoing disputes among Democrats about how much the bill should cost, as well as which provisions should be included and which may need to be cut or slimmed down.

It is easy to be overwhelmed by the din of intraparty squabbles over the reconciliation bill; behind those scenes, Congress is taking some action to address food insecurity. The House Rules Committee has held a series of roundtable discussions on the topic since June, and its chair, McGovern, has a keen interest in the issue: He serves as  the co-chair of the House Hunger Caucus and is the founder of the bipartisan Food Is Medicine working group, which aims to address the intersection of hunger and health. Last month, McGovern sent a letter signed by all House committee chairs to President Joe Biden, urging him to “convene a national conference on food, nutrition, hunger, and health” that would “design a roadmap to end hunger in America by 2030.” The last time the White House held such a conference was during the Nixon administration.

But the confluence of these issues also highlights the difficulties that poor Americans face just in the functioning of everyday life. This can result in “decision fatigue,” the exhaustion that comes from having to make a series of difficult choices related to housing, health care, childcare, obtaining food, and the other everyday stressors that are significantly more challenging for low-income Americans.

“For an average middle-class, upper-middle-class individual, these decisions are nothing,” said Miranda Miller-Klugesherz, the director of the Kansas Alliance for Wellness. But on top of the “extreme stress and trauma” of poverty, low-income Americans have “so many poor decisions in front of [them]”; they can only afford unhealthy foods, for example, or can’t pay both a doctor’s bill and a utilities bill.

Jamila Michener, the co-director of the Center for Health Equity at Cornell University, said that power was at the crux of these issues. Decision fatigue “essentially comes from having to fight for your basic existence,” she said, and not having human dignity recognized.

“It means that your lived experiences are not visible to people who are in power,” Michener said, leading to those in power opposing policies that can help low-income Americans.

The primary issue, panelists argued, is not that it is impossible to overcome food insecurity, but that those in power may not help low-income Americans do so.

“The challenge here is deciding whether we are who we say we are,” said Cliff Johnson, the director of the MacArthur Justice Center at the University of Mississippi School of Law. “It’s a matter of values, and personal and political will.”