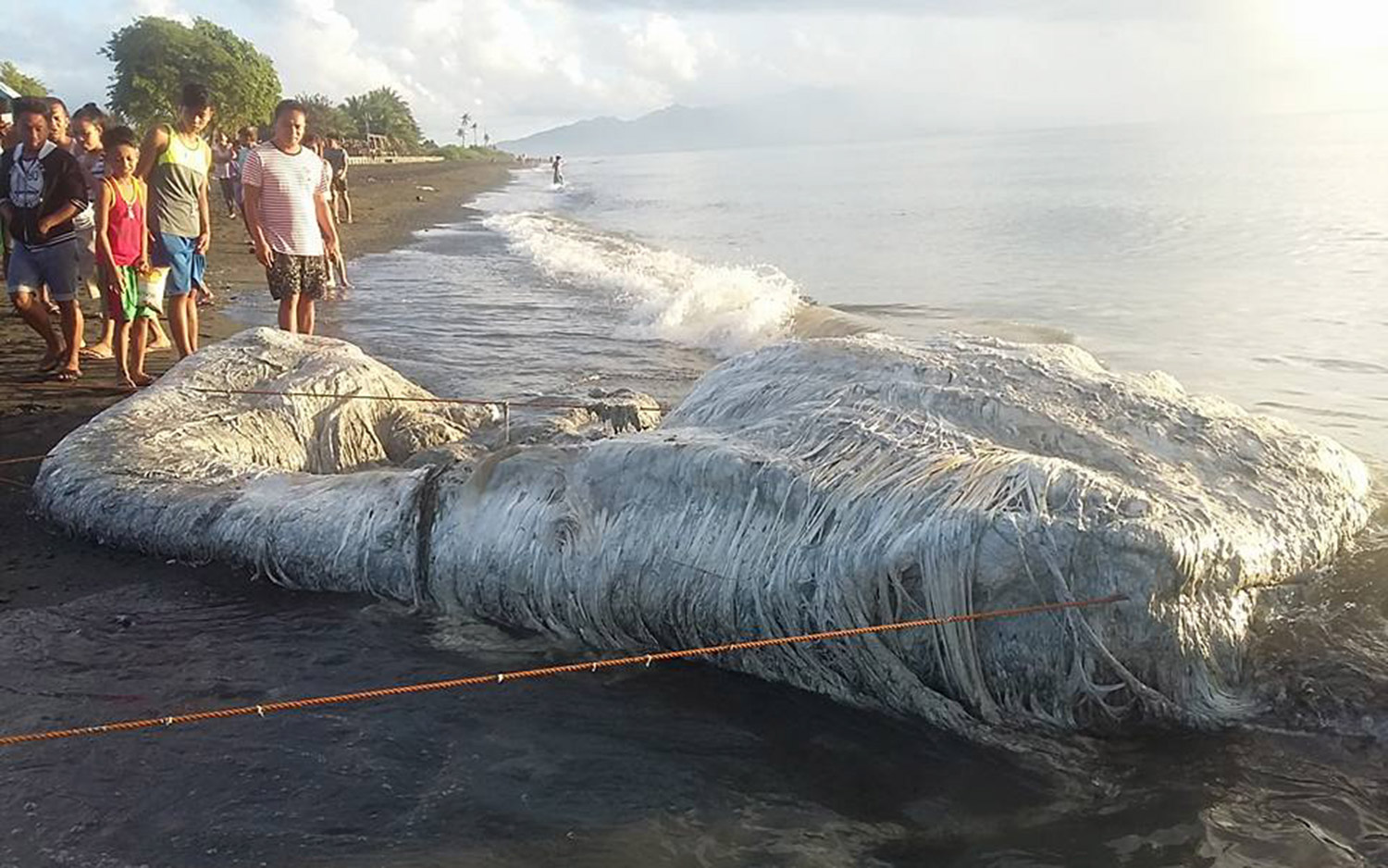 A glimpse below the waves can be like watching a scene from a science-fiction movie, filled with bizarre creatures that would look at home in an alien world. Most of the time these strange animals stick to the murky ocean depths, but occasionally they wash up on land and bewilder beachgoers around the world. Here are some of the weirdest creatures that have washed ashore in the last decade.

Giant squid (Architeuthis dux) have inspired myths and legends for centuries, but a sighting is extremely uncommon. These gargantuan creatures are the world’s largest invertebrates and have the biggest eyes in the animal kingdom. They inhabit deep water and rarely wash up on land.

But in October 2013, a monstrous giant squid washed up on a Spanish beach. The tentacled behemoth measured 30 feet (9 meters) long and weighed 400 pounds (180 kilograms) — that’s about the same weight as an adult brown bear.

In 2020, an even larger giant squid turned up in Britannia Bay, South Africa. The specimen was remarkably intact, and was likely more than 13 feet (4 m) long and weighed over 660 pounds (330 kg), Live Science previously reported.

Residents of the Oriental Mindoro province of the Philippines were baffled by the appearance of a huge hairy beast in May 2018. Before experts were able to examine and identify the body, onlookers named the 20-foot (6 m) carcass “the globster.” As is to be expected of a gigantic rotting sea creature, the smell was pretty staggering. Scientists later explained that the blobby body was probably the remains of a whale, and that the hair-like strands covering it were most likely decomposing muscle fibers.

The coast of South Africa became the scene of a watery whodunit in May 2017, when three great white sharks (Carcharodon carcharias) washed ashore. The puzzling part? They were all missing their livers, and one was missing its heart. Scientists performed necropsies on all three sharks, examining their injuries to uncover the cause of death.

Their detective work identified the likely culprit: orcas. Orcas (Orcinus orca), also called killer whales, are known to attack other shark species and eat their organs, and the sharks’ injuries were consistent with their handiwork. Livers are a particularly choice snack for orcas because they’re filled with fat and rich in nutrients.

Nightmarish anglerfish with lightbulb on its head

A fisherman found the body of a deep-sea anglerfish at Crystal Cove State Park in California in May 2021. It was a rare find as well as a startling one, since these fish usually lurk in dark water around 3,000 feet (914 m) below the surface and are kind of spooky-looking.

Park officials determined that the body was most likely that of a Pacific footballfish (Himantolophus sagamius); a rather light-hearted name for such a frightening fish. The unusual appendage that dangles from the fish’s face ends in a bioluminescent bulb, which anglerfish use to lure prey through the darkness and into their waiting jaws.

A beach full of sea potatoes

The beaches of Cornwall in the U.K. are usually associated with ice cream and seagulls, but in August 2018 beachgoers were met with a surprising sight. Visitors to Penzance beach found it covered with tennis ball-size creatures fondly known as “heart urchins” or “sea potatoes.”

These urchins are covered in short yellow-brown spines when they’re alive, and spend their days buried several inches into the seabed around countries including the U.K., Ireland and Japan. Experts believe the stranding was evidence of a mass mating event gone wrong. Sea potatoes venture out of their burrows to breed, but a storm may have killed both the mood and the amorous urchins.

A beach on Catalina Island, California was host to a rare sight in June, 2015: a huge deep-sea oarfish. As the name suggests, these fish usually keep out of sight in deep water. This beached giant, measuring an impressive 13.5 feet (4 m) in length, gave scientists a chance to study the elusive creature and its internal biology.

As well as examining its muscles, feeding apparatus and “jelly-like” bones, the scientists took a look at its reproductive system. There was no doubting the oarfish’s sex once they’d discovered a pair of ovaries that were 7 feet (2.1 m) long and weighed 24 pounds (11 kg).

Both grisly and bewildering, the appearance of several decapitated Steller sea lions (Eumetopias jubatus) on the shore of Vancouver Island, Canada in 2020 had scientists stumped. At least five headless sea lions were spotted between April and July, some with their clean skulls laid next to their bodies. Rather than hungry scavengers, marine mammal experts believed the decapitations were the work of humans. Whether someone was killing the sea lions or removing their heads when they were already dead remains a mystery.

In 2019, a California beach became the scene of a mass penis fish beaching. The 10-inch-long (25 centimeter), plump and pink marine worm is also known as a fat innkeeper worm (Urechis caupo). The worm’s phallic shape is perfect for a life of building burrows in the intertidal zone and catching food with a coughed-up mucus net.

Biologists suspected the beaching was the result of a storm. Strong wind and waves can shift huge amounts of sand, breaking burrows open and flinging their unsuspecting residents onto the beach.

This may just be the weirdest thing you’ve seen today! Thousands of these marine worms, called fat innkeeper worms—or “penis fish”—washed up on Drake’s Beach after a recent storm. 🌊 But why? https://t.co/MwY6xkN3kb pic.twitter.com/vGMpSvGoATDecember 11, 2019

Another mass beaching took place along the U.S. West Coast in 2014. The glassy creatures turned out to be by-the-wind sailors, hydrozoans related to the Portuguese man-o-war. Instead of a sting, this species focuses its efforts on its sail. The structure, made up of a colony of hundreds of small organisms, allows the sailors to travel the waters of the open ocean.

A downside of being a living sailboat is a propensity to get swept up by storms. Winds likely blew the creatures right up onto the sand, where they left both a strange sight and a strong smell.

In May 2014, beachgoers visiting Jenette’s Pier in North Carolina came face to face with a scaleless fanged fish. They got an extra fright when the fish turned out to be alive. It was identified as a long-snouted lancetfish (Alepisaurus ferox), an uncommon nocturnal predator that usually stays well away from the shore. The large fangs are used for chomping crustaceans, squid and fish, including other lancetfish.

The stranded fish was released in deeper water but later turned up on the shore again, suggesting it was too sick to make it back out to sea.

When a 15-foot-long “sea monster” washed up in Maine in July 2018, it had already decomposed so much that it was nearly unrecognizable. One beachgoer described it as a blob and called it “pretty gross.” Because of its formidable size, several people who saw the carcass believed it was the remains of a whale. But experts were adamant that this was no marine mammal; it was a basking shark, the second-largest shark species on the planet. Its body was so large that a bulldozer had to be brought in to remove it from the beach.