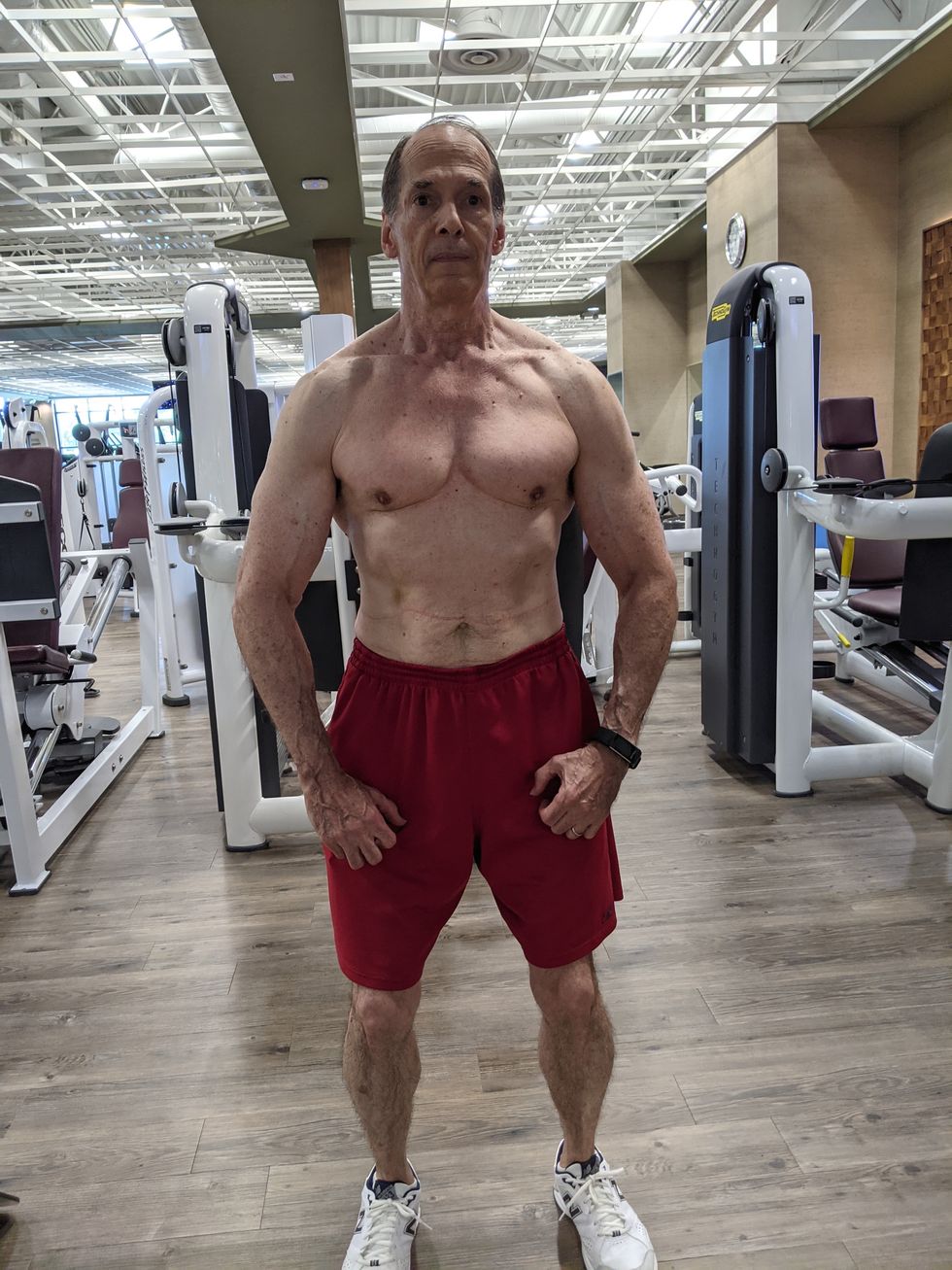 Airline pilot Bruce Endler, 63, shares with Men’s Health how he overcame a quarantine slump and transformed his body in just 60 days.

I have always been involved in some form of physical activity, from weight training to martial arts, and around my 60th birthday I got into bodybuilding. However, it was not unusual to miss several months at a time for various reasons. In addition to family and work issues, several surgeries caused me to suspend training. I’ve had both shoulders decompressed, a deviated septum corrected (a result of my Tae Kwon Do studies) and a spinal surgery that cost me three months.

As an airline pilot, I would plan my trips around layovers where I knew I would have have access to a gym and time to train. I would also work out with my trainer Bob Holper at Life Time once or twice a week depending on my work schedule. But starting in late March 2020, the airline industry suffered a dramatic reduction in passenger traffic due to the pandemic.

Coupled with the inability to train on the road, the shutdown of gyms meant that I was solely working out at home. I have never found pure bodyweight workouts appealing, and had only minimal equipment available at the beginning of quarantine. I ordered some resistance bands, but the global logistics issues resulted in a lengthy delay in their arrival. The same issue affected the building of my garage gym .The result was that my workouts became markedly inconsistent.

On the nutrition side, I also struggled to stick to the macronutrients and calories in my healthy eating plan: in order to support the struggling restaurant industry, my wife and I routinely ordered from three or four of our favorite local restaurants. And like many others, we also found ourselves drinking too much and watching too much television.

I decided to sign up for Life Time’s 60-Day Challenge. My younger son, Andrew, had just competed in his first bodybuilding show, and he any my trainer Bob (an IFBB pro) encouraged me to give it a shot. I have always been goal-oriented and driven to succeed. I was disappointed with the extra body fat I had acquired, and wanted to return to a healthier state. Ultimately, I decided to enrol a couple of weeks prior to the challenge start date.

Bob and I set up two three-day training splits. The first was heavier compound movements, and the second was higher rep isolation movements. He left cardio up to me, but encouraged me to begin each day with fasting fat-burning cardio. I began each day with 16 ounces of water, a cup of coffee, and a 45-minute walk. Then it was meal one. I then did my weight training for 60 to 90 minutes followed by meal two. Another 45-minute walk was followed by meal three and a shower, with meals four and five about three hours apart. On non-weight training days, I would add to or replace one of the walking workouts with a 30-minute HIIT session on an elliptical machine.

Nutrition started off low carb for the first few weeks to get my metabolism going. I then moved into a few weeks of carb cycling. Bob tends to like five low days followed by two high days, but I have found that three low and one high works better for me. Since the challenge ended, I have been adding additional daily carbs on a weekly basis. This has slowed the rate of weight loss but increased my metabolism further.

Getting back into consistent training was fabulous. I have always enjoyed the endorphin high. Additionally, despite the weight loss, my strength was mostly maintained. Fortunately, motivation was not a factor since the pilot side of me thrives on routine. Additionally, my wife’s trainer provided her with a nutrition plan that was similar initially, so we could eat together.

I began the 60-day process at a little over 165 pounds and 22.9% body fat. I ended the contest at 152.1 pounds and 17.8%. Since then, continued training has put me at 15.1%. I feel so much more confident as a result. Pullups are also a lot easier, which means I am about ready to make them weighted rather than bodyweight.

The most important advice I could give anyone is to understand your own journey. There will always be setbacks or detours, but you must press on with the effort. Consistency is the key to success, but don’t let an inability to maintain consistency keep you from undertaking the journey. Small successes add up. One more rep, another 5 pounds, or a few more minutes can make a big difference. Never, ever quit. Or, if you are a Galaxy Quest fan: “Never give up, never surrender.”