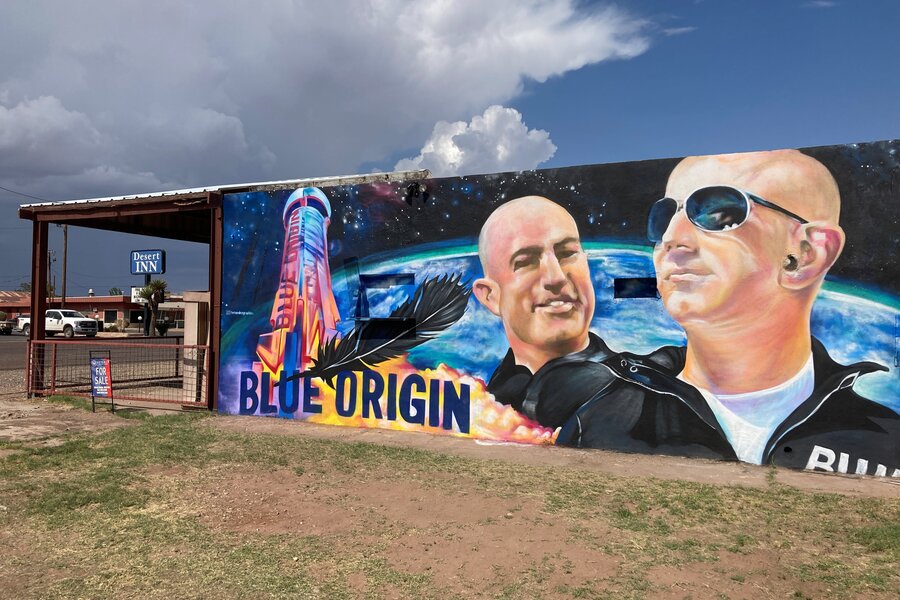 For years, the official letterhead for the small town of Van Horn, tucked neatly among the foothills of the Guadalupe Mountains, read simply: “Farming, ranching, mining.”

And while there is still some farming and ranching in this far West Texas community, and a talc mine still operates near the edge of town, there’s another booming business in its midst: space tourism.

The sprawling spaceport of Blue Origin, the company founded by business magnate Jeff Bezos in 2000, is located about 25 miles outside of the town of about 1,800 residents on what was once desolate desert ranchland. On Tuesday, the company launched four people on a 10-minute trip into space, including Mr. Bezos, his brother, Mark, female aviation pioneer Wally Funk, and Oliver Daemen, an 18-year-old Dutchman and last-minute fill-in for the winner of a $28 million charity auction who had a scheduling conflict. Ms. Funk, at age 82, and Mr. Daemen have become the oldest and youngest people in space.

“That’s the big buzz in this little town,” said Valentina Muro as she rang up a customer at the Broadway Café along Van Horn’s main strip. “It’s kind of put Van Horn on the map a little more than it was.”

The town, which sprouted up in the late 1800s during the construction of the Texas and Pacific Railway, now is mostly an overnight stop for travelers along Interstate 10, which runs parallel to the town’s main road, dotted with hotels, restaurants, truck stops, and convenience stores.

“We often plug ourselves as the crossroads of the Texas Mountain Trail,” Ms. Brewster said. “We’re right here in the center and this can be your hub for all your adventures in far West Texas.”

As for the impact that Blue Origin’s operations have had on the town, the reaction among locals is mixed. While employees and contractors have been working at the facility since about 2005, Ms. Brewster said it’s just been in the past five years or so that workers for Blue Origin have started integrating themselves into the community.

“When they were in the development stages, Blue Origin was so secretive about what was going on, their people couldn’t really socialize because they couldn’t talk about their work and things like that,” Ms. Brewster said. “And it was like, here are the Blue Origin people, and here are the Van Horn people. But that’s starting to change for the better.”

One of the roadblocks to connecting locals and the scientists and engineers who work at Blue Origin is one that plagues many rural American communities – a lack of available housing. A local developer constructed about a dozen two-bedroom homes and a small apartment complex, and all of those were quickly rented out for Blue Origin employees. Of the roughly 250 employees and contractors that work at the facility, Ms. Brewster said only about 40% live in Van Horn.

Krissy Lerdal, whose husband is an engineer for the company, said he lived in a local hotel for more than four years before finally relocating his family to Van Horn from New Mexico.

“When we looked to buy here, there were five houses on the market, none of which passed inspection, and so we had to bring in a modular home,” Ms. Lerdal said. “It’s not my dream home, but housing is lacking.”

Still, in the three-and-a-half years that she has lived here, Ms. Lerdal said she has worked hard to integrate herself into the community. Her children attend the local school system, and she joined the Women’s Service League, which raises money for scholarships. She also has a seat on the city’s zoning board.

“I know the people who are living here and bought homes here have been trying hard to be involved,” she said. “It’s hard when most of the community is all related. We’re the outsiders and we don’t want to step on toes, but we want to be involved, and it’s a hard line to walk.

“I’m glad that I feel like I’m part of the community, but some people don’t feel that way.”

Linda McDonald, a longtime Van Horn resident and the district clerk for the seat of Culberson County, said that while she’s amazed at the prospect of people being launched into space from practically her back yard, she bristles at the suggestion that Blue Origin put Van Horn on the map.

“We are already on the map,” she told a group of about 100 graduates of Van Horn High School during a recent pep rally and reunion that was part of the town’s annual jubilee. “You have helped put us on the map, and we should be proud of that.”