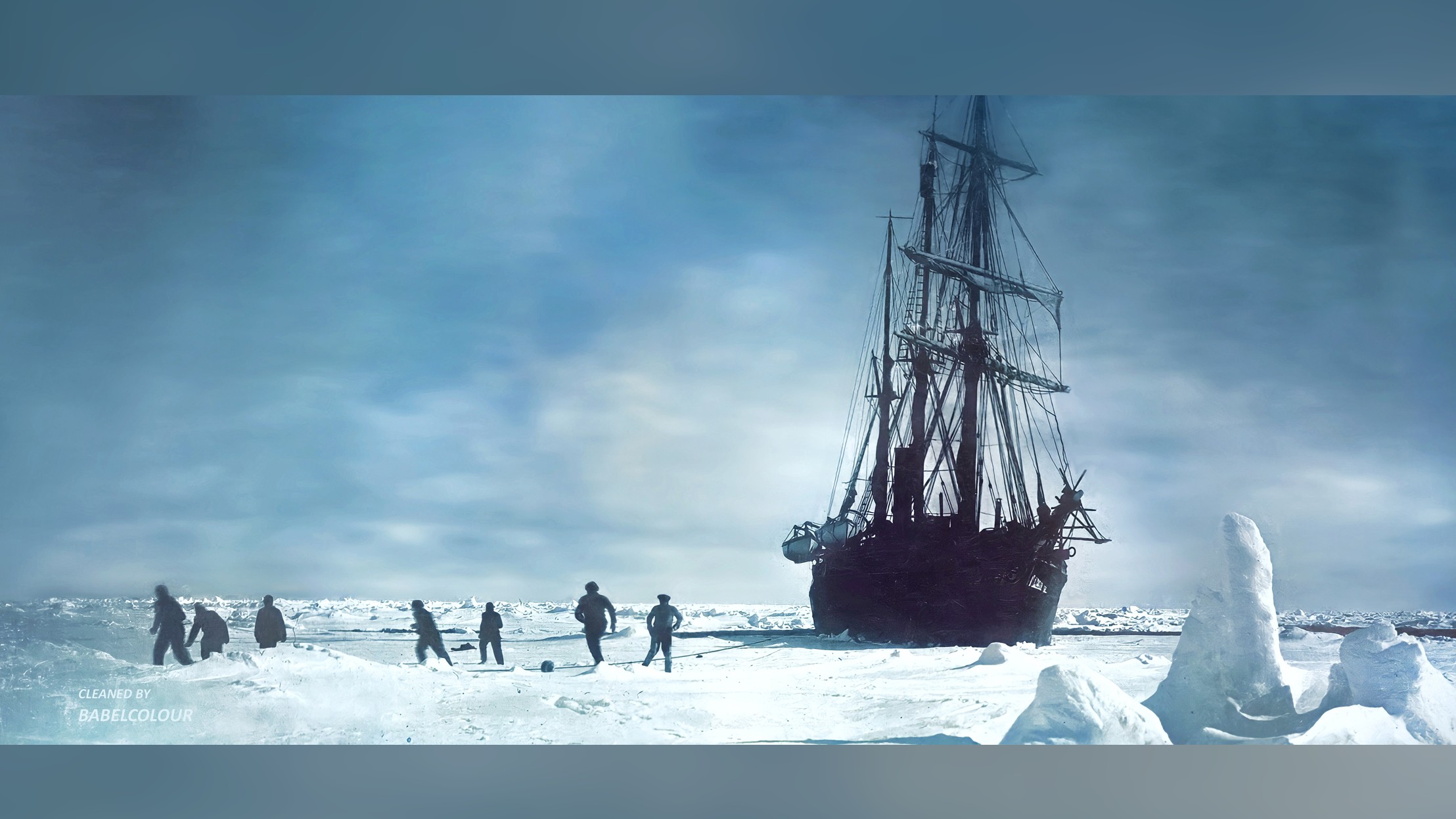 The Endurance against a pale Antarctic sky, stuck in the pack ice. Shackleton’s voyage went down in history as being uniquely disastrous and surprisingly successful all at once. Despite losing the ship and enduring almost unthinkable conditions, the crew all escaped Antarctica with their lives.
(Image credit: Stuart Humphryes/Babel Colour)

Retouched images of the famous Shackleton expedition of 1914 to 1917 look like they might have been snapped by a photographer visiting Antarctica today.

The photos were originally taken in color, but London multimedia artist Stuart Humphryes brought them into the 21st century by enhancing what was already there. In the original color photographs — saved at no small effort by Sir Ernest Shackleton and his crew after their ship was crushed in the pack ice — the colors are muted, giving the photographs a far-off, distant feeling. The retouched versions are more textured and immersive.

“It is quite an emotional jolt for people to actually see images from the expedition not only in full vivid colour but enhanced and immediate and contemporary,” Humphryes wrote in an email to Live Science. “It closes the century gap between the photos being taken and the modern viewer looking at them.”

Shackleton was an experienced hand in the Antarctic when he launched his expedition aboard the Endurance in 1914. His goal was to sail through the Weddell Sea and put ashore a party of men, sleds and dogs to make the first-ever land crossing of the continent. Instead, Endurance became stuck fast in the pack ice in mid-January 1915. The crew spent the long Antarctic winter aboard, hoping to be freed with the summer thaw. Instead, the ice crushed the ship in October 1915, and the men resorted to camping on the ice. On Nov. 21, 1915, the Endurance sank. Shackleton and his crew then camped on the softening pack ice and struggled to drag their lifeboats across it; ultimately, the crew managed to launch their lifeboats into the open water for a perilous six-day voyage to Elephant Island, which was a short distance away. A smaller party, including Shackleton himself, then launched from Elephant Island in a single boat for an 800 mile (1,300 kilometer) hail-Mary trip across the heaving sea to South Georgia island, where a whaling station offered hope of rescue.

The rescue party landed on the opposite side of the island as the whaling station, necessitating thatShackleton, Captain Frank Worsley and second officer Tom Crean trek across the island’s rugged topography. South Georgia had never been crossed before, but the trio pulled off the journey with no map and barely any equipment. Their accomplishments, and the subsequent rescue effort for the rest of the crew, were immortalized in the classic book “Endurance: Shackleton’s Incredible Voyage” (Hodder & Stoughton, 1959).

Not only did the entire crew survive, the voyage’s photographer managed to save 150 of the 550 original photographic plates taken on the expedition. They show the ship stuck fast in ice, the crew going about their daily chores, and stunning Antarctic landscapes.

It was these photographs that caught Humphryes’ eye.

“[Shackleton’s] tribulations and determination is the stuff of legend, and many people have read of his feats of endurance and the miracle of his crew’s survival, but much of that story lives in people’s imagination and in a few monochrome photographs that have been subsequently published,” Humphryes said.

Humphryes got his start as a colorizer, taking old black-and-white film footage and adding color to make color movies. Now, he is a colorist, taking century-old photographs that were already in color and amping them up to better reflect what the photographer would have seen through the lens. Humphryes compares the process to removing pops, clicks and other distortions from sound recordings. The retoucher adds nothing new, but enhances what is there.

“Photography of the 1910s is often thought of [as] monochrome and indistinct, the films as scratchy and jerky,” he said.” “Hand-cranked cameras and black-and-white film make the past look alien and unrelatable. But I try to build a bridge between the modern viewer and the past by removing the ravages of time and making a photo from 1910 look like it was taken on an iPhone.”

In the Shackleton photos, the result is a stunning Antarctic sky in blue and pink, sled dogs you feel like you could pet, and crew members who look like anyone you might pass on a blustery winter day today. On his BabelColour Twitter feed (@StuartHumphryes), Humphryes showcases other retouched photos: World War I soldiers, children playing along the English coast, the governor of Aqaba, Arabia, in 1918. More of Humphryes’ work is available at babelcolour.com.

Stephanie Pappas is a contributing writer for Live Science covering topics from geoscience to archaeology to the human brain and behavior. A freelancer based in Denver, Colorado, she also regularly contributes to Scientific American and The Monitor, the monthly magazine of the American Psychological Association. Stephanie received a bachelor’s degree in psychology from the University of South Carolina and a graduate certificate in science communication from the University of California, Santa Cruz.