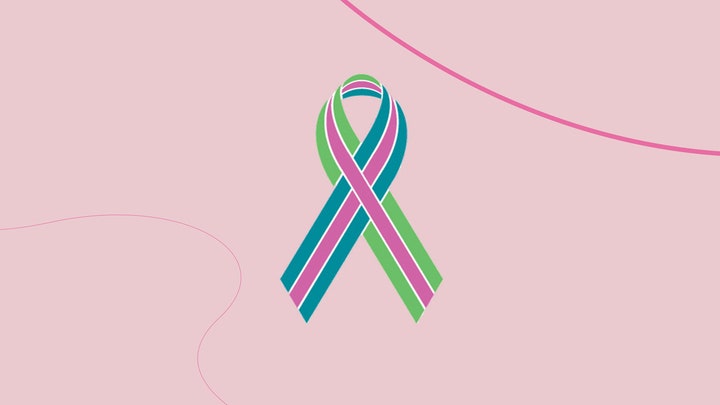 It’s a sad fact that today, nearly everyone knows someone who’s had breast cancer. Yet there’s one fact not everyone knows: 30% of people with early-stage breast cancer who’ve “beat” the disease will eventually see it return as stage IV, also known as advanced or metastatic breast cancer. That means the disease has spread to other parts of the body, a diagnosis that carries an average life expectancy of just 24 to 36 months. MBC is the only form of breast cancer that kills. Yet while MBC claims the lives of 115 people daily (“like an airplane falling from the sky every single day”), less than 5% of U.S. breast-cancer funds raised go toward researching new treatments for it.

Those shocking statistics explain why more and more people are embracing a reimagined breast-cancer-awareness ribbon that goes beyond pink. Created by SELF in 1992, the instantly recognizable pink ribbon is closely associated with early detection and celebrating survivors—but there’s no surviving or “beating” MBC, just buying time via treatment. Thus a tricolor ribbon, for metastatic breast cancer, aims to raise awareness for the need to direct funding toward the development of life-extending treatments. In it, green represents the triumph of spring over winter, life over death; teal symbolizes healing and spirituality; and a thin pink-ribbon overlay signifies metastatic cancer that originated in the breast.

One inspiring initiative that’s helped the ribbon for metastatic breast cancer to go mainstream is an annual event that shines light on its colors and its cause—quite literally and beautifully. During #LightUpMBC, hundreds of iconic landmarks around the world are illuminated in green, pink, and teal. More than 225 sites range from soaring skyscrapers like One World Trade Center to natural wonders like Niagara Falls, spanning all 50 states and beyond. On October 13 (National Metastatic Breast Cancer Awareness Day), viewers can find a local landmark to visit in person or take it all in from the comfort of home by tuning in to #LightUpMBC Live, a virtual benefit kicking off at 8:30 p.m. ET. Airing on LiveXLive, Facebook Live, YouTube, and metavivor.org/lightupmbc, the show will feature inspiring MBC stories told from the illuminated landmarks around the globe, as well as live musical performances by Kristin Chenoweth, Tom Morello of Rage Against the Machine, and Rob Thomas of Matchbox Twenty. Another highlight this year: Drone Racing League pilot Phluxy, whose aunt is a breast-cancer survivor, will fly over the I-35W bridge and Capella Tower in Minneapolis to capture a spectacular aerial view of its glowing MBC-awareness colors. Cohosting the show are TV personality Katie McGee and motivational speaker Tami Eagle, who is living with MBC and created The Eagle Method during the pandemic as a way to help others cope with uncertainty, build resilience, and make each day meaningful.

The benefit—which raised more than $100,000—featured inspiring stories from patient ambassadors like Chawnte Randall, who’s raising awareness of the fact that the mortality rate of MBC is 40% higher for Black women; Adiba Barney, author of the upcoming book When Life Hands You Cactuses, Make Margaritas; and Dee Lakhani Shravah, who found a lump during a self-exam and was diagnosed with MBC just before her 40th birthday. Veteran Kirby Lewis discussed his mastectomy (because yes, men get breast cancer too), and Eva Crawford, a mother of three, spoke to why pink is not enough. The event also included musical performances by John Rzeznik of the Goo Goo Dolls and David Bryan of Bon Jovi.

The original spark for #LightUpMBC came from Laura Inahara, a New Hampshire woman who lost her best friend, Jessica Moore, to metastatic breast cancer. A varsity girls’ basketball coach, Moore had gotten elbowed in the breast while playing the game one day, and the resulting pain kept lingering. As a nurse, she knew her injury should be healing more quickly. After she visited doctors to get checked out, she found out she had metastatic breast cancer—meaning the disease had already progressed and spread to her bones, despite her having no other symptoms. She was only 32. She fought the disease for four years, passing away at age 36. “Prior to Jessica’s passing, she said she thought it would be amazing to light a landmark for MBC as a way to raise awareness,” says Inahara, who founded a group called Moore Fight Moore Strong in her friend’s honor. In October 2017, five months after Moore died, the group lit their first landmark—the Memorial Bridge in Portsmouth, New Hampshire, near Jessica’s hometown.

A working mom by day, Inahara began sitting down each night to work on expanding #LightUpMBC. Now the annual event is a major source of donations, via Metavivor, toward researching treatments that could turn stage IV breast cancer into a chronic disease instead of a deadly one. “[Metavivor remains] the only U.S. organization dedicated to awarding annual grants for peer-reviewed research into stage IV breast cancer,” Inahara explains. “That is what it will take to find a cure and stop losing more than 43,000 lives to breast cancer each year. We feel certain that we can get more research funding so no more of our friends have to die from this disease. There is often a misconception there is a cure for breast cancer. We want to share with anyone who will listen that there is not.”