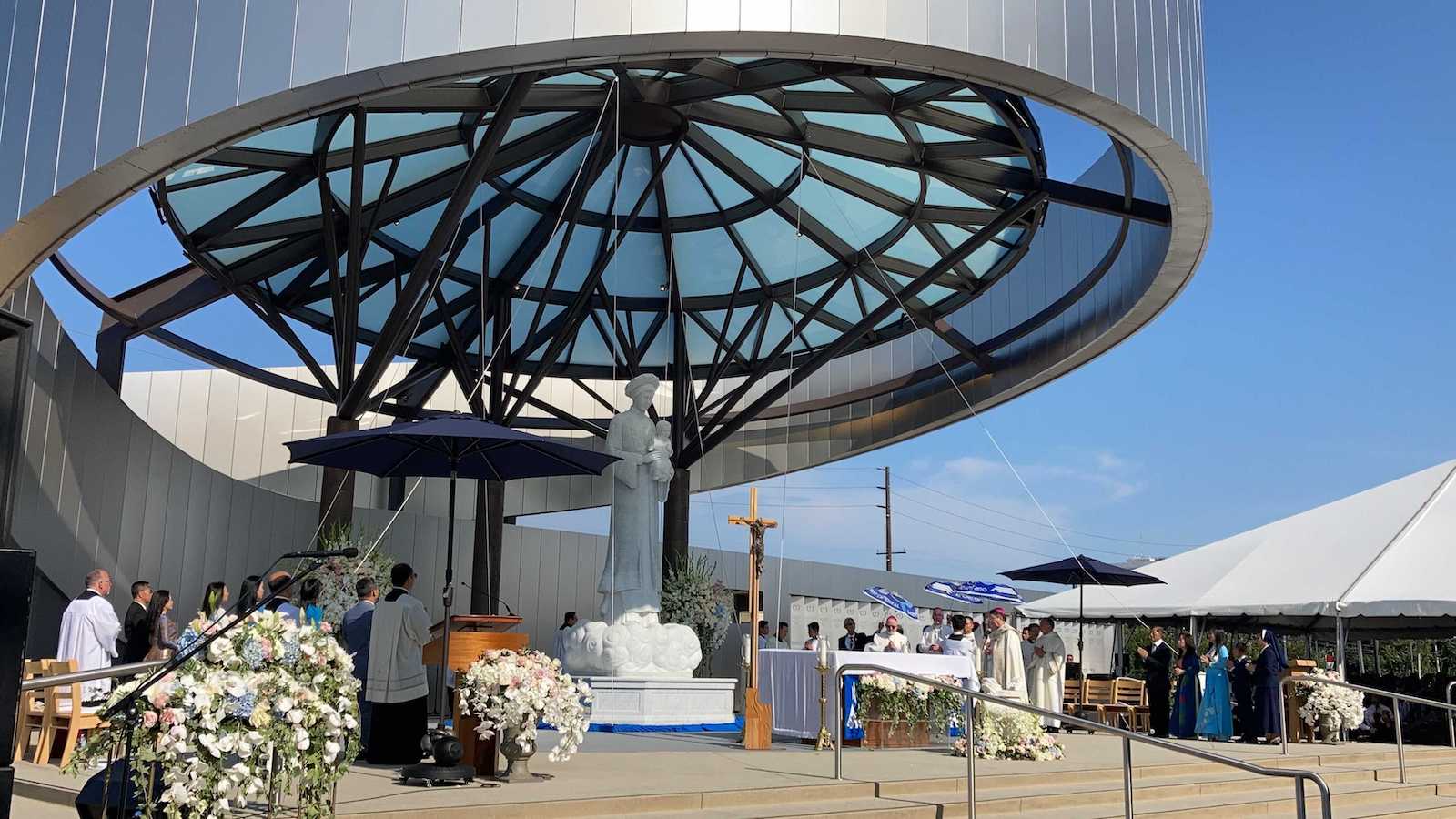 GARDEN GROVE, Calif. (RNS) — Deborah Tran said she no longer practices her family’s Catholic faith, but she and her family made the trek from Denver, Colorado, to witness the unveiling of a shrine to Our Lady of La Vang, a patron of Vietnamese Catholicism and a beacon for her parent’s generation of Vietnamese immigrants.

“She symbolizes perseverance and standing up for what you believe in,” said Tran, 48. “It’s like the Lady of Guadalupe for the Vietnamese community. That’s how big it is.”

Tran was one of an estimated 8,000 people who came Saturday (July 17) to attend the unveiling of what is the first major, stand-alone shrine to the La Vang virgin in the United States.

Our Lady of La Vang is said to have appeared in a remote rainforest in the late 1700s to a group of Catholics fleeing persecution in Vietnam. She became a centerpiece of Catholic faith in the country, and after the fall of Saigon at the end of the Vietnam War in 1975 — when more than a million Vietnamese became refugees — her intercession was credited with sparing the lives of her devotees.

The $12.6-million, 12-foot-high statue, located at the Catholic Diocese of Orange’s Christ Cathedral, was built to be a gathering place for the 100,000 Vietnamese-American Catholics in the diocese. More than 5,000 people from across the country and the world donated to make the statue possible.

Standing on pedestal shaped like a cloud, Our Lady of La Vang is depicted holding the infant Jesus and wearing a traditional Vietnamese áo dài dress and khăn đống hat. Above her is a glass canopy held up by treelike pillars and a stainless steel ribbon looping around it, which highlights the names of 117 Catholics who were martyred for their religious beliefs in Vietnam.

“This is also a sacred day of gratitude and joy for all of us because truly it is an encounter with the Lord and his mother, Our Lady of La Vang,” said the Most Rev. Kevin Vann, bishop of the Diocese of Orange, during the blessing ceremony.

Also celebrating was Archbishop Christophe Pierre, the Vatican’s papal nuncio to the U.S., who addressed the congregants, saying, “We are the church.”

“Don’t be afraid my friends to be the church where you live in this country,” Pierre said. “You
can do a lot to change this society because … all societies need to be changed by the gospel.”

“Catholic means universal. All of us we belong to the church in its universality,” Pierre added.

The nuncio’s presence pointed to the importance of Vietnamese Catholics and immigrants in general to the growth of the church in the United States, where a quarter of Catholics were born outside the country. In addition, Vietnamese Catholics have provided 10% of vocations to the priesthood in recent years, according to Religion & Ethics Newsweekly.

Before the blessing, Huan Le, chair of the Our Lady of La Vang committee, honored the late Dominic Luong, the first U.S. Catholic bishop of Vietnamese descent, who helped plant a vision for the La Vang statue.

With the building of the shrine, Le said Luong “saw a vibrant place where Catholics of all nationalities could come and celebrate Christ together through their culture right here in Orange County.”

“Special attention was paid to capture the historical aspects of our mother Mary’s appearance in La Vang while seamlessly flowing with the renowned architecture of our Christ Cathedral,” he added.

Tran, whose immediate family was caught leaving Vietnam after the war and sent back, later made their way to the U.S. She wept as she explained what the Virgin means to those who remember those times.

“Whether you believe (in Our Lady of La Vang) or not,” she said, “it is something that kept them going through a war-torn country.”