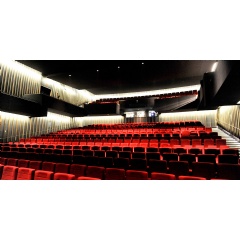 TIFF announced today updates to its programming schedule and in-person events. In response to the province-wide return to Stage 2 COVID protocols, TIFF Bell Lightbox will open its doors and welcome audiences back on Thursday, February 3. The TIFF Cinematheque series that were paused in January have been rescheduled to ensure audiences have an opportunity to watch these curated films on the big screen. Most in-person screenings and events scheduled for February remain as planned, with the return of Reel Talk and Secret Movie Club and a few exciting late additions.

Burks will be responsible for creating strategies that drive partnership revenue growth, championing an exceptional partner experience, and developing a sustainable competitive advantage for TIFF within the Canadian and International markets. She will work closely with new and long-time partners to understand their needs and align TIFF’s offerings and mission to their goals and strategies.

Starting February 4, audiences can look forward to TIFF’s exclusive 70mm run of Paul Thomas Anderson’s awards-season frontrunner Licorice Pizza, followed on February 11 by The Worst Person in the World, the finale in Joachim Trier’s “Oslo Trilogy” that was shortlisted for Best International Feature Film at the 94th Academy Awards. An Oscar Shorts showcase, slated for February 25, features a selection of the 2022 Academy Award–nominated short films. Tickets for Licorice Pizza will go on sale February 2 for TIFF Members and February 3 for the general public. Stay tuned for more New Releases to be announced in the coming days.

The TIFF Next Wave Film Festival will now run April 22–24, 2022. The three-day event at TIFF Bell Lightbox and on digital TIFF Bell Lightbox showcases the best international feature films for young audiences and is free to anyone under 25. Engaging the next generation of film lovers and creators, this dynamic film festival celebrates new voices in cinema with stories of self-discovery, community, and finding one’s place in the world. Programmed by the TIFF Next Wave Committee — a group of 12 socially engaged high-school students from across Toronto — the Next Wave festival highlights the power in young people seeing themselves and their communities represented on screen. More programming details will be announced on March 30, 2022. The TIFF Next Wave Film Festival is supported by The Shawn Mendes Foundation.

World of Glory: The Films of Roy Andersson has moved its opening to May 2022 at TIFF Bell Lightbox. The spotlight on the celebrated Swedish filmmaker will make stops at the Winnipeg Cinematheque (January 14–30), The Cinematheque in Vancouver (February 12–27), and La Cinémathèque québécoise in Montreal (February 2022). TIFF Cinematheque is presenting three retrospectives in a year-long series celebrating the best of Nordic cinema and filmmakers, made possible as part of NORDIC BRIDGES 2022 in collaboration with Harbourfront Centre, Toronto. In addition, audiences can view Fred’s Scott’s documentary Being a Human Person (2020) as a primer on Andersson’s work, available to rent now on digital TIFF Bell Lightbox.

The screenings of Cinematheque offerings originally scheduled to open in January — Both Sides, Now: The Roles of Natalie Wood, New and Restored, and Korean Cinema: Triple F-Rated — will be scheduled from February to Spring-Summer 2022.

Canada’s Top Ten Shorts will be moving to March, screening alongside the Features programme for a month-long series that showcases the best Canadian shorts and feature films of 2021 and marks the 20th anniversary of TIFF’s Canada’s Top Ten list. This year’s shorts lineup includes powerful new works by emerging and established filmmakers, including two of Canada’s most revered directors: Zacharias Kunuk, whose film Angakusajaujuq: The Shaman’s Apprentice has been shortlisted for an Oscar for Best Animated Short Film, and Alanis Obomsawin, recipient of the Jeff Skoll Award in Impact Media supported by Participant Media at the 2021 TIFF Tribute Awards.

Bell Let’s Talk Day: Quickening
January 26–28, 2022, FREE
TIFF celebrates the power of film to give voice to mental-health experiences and to promote well-being by bringing people together. In support of Bell Let’s Talk Day on January 26, audiences are invited to enjoy a free digital screening of Quickening, the debut feature from Pakistani Canadian writer-director Haya Waseem. The film is an insightful exploration of a young Pakistani Canadian woman’s attempt to balance familial obligations, cultural traditions, and personal independence, and how this impacts her mental health.

Join Waseem and Soch Mental Health Co-Founder Maneet Chahal for a conversation about Quickening and mental health in the context of culture, identity, and belonging. Be among the first to reserve a ticket for the film and conversation on digital TIFF Bell Lightbox, available to watch for free between January 26 at 10am ET and January 28 at 10am ET. The conversation will also stream on TIFF’s Facebook, Twitter, and YouTube channels on January 26 at 12pm ET.

On Bell Let’s Talk Day, Bell will donate towards mental health initiatives in Canada for every applicable interaction. Visit bell.ca/letstalk to learn more.

Tickets for updated February screenings will go on sale starting January 26 for TIFF Members and on January 27 for the general public.

Boosie Fade Film Club
February 3, 2022 (quarterly series)
TIFF’s ongoing series of cult classics that have made a huge impact on hip-hop and R&B culture is back with a 35mm print of Romeo Must Die (2000). The film stars R&B singer Aaliyah as Trish O’Day, daughter of a US crime boss (Delroy Lindo), who falls in love with ex-cop Han Sing (Li), who himself happens to be the scion of a rival crime family in Hong Kong. Romeo Must Die marked the directorial debut of veteran cinematographer Andrzej Bartkowiak (Prince of the City, Speed).

Lockdown, Loneliness and Solitude
February 4–18, 2022
On the occasion of TIFF’s return to the cinema, a selection of films reflecting on the seclusion and social disconnect that has characterized the COVID-19 era, spanning genres, time periods, and emotional registers. Films in this series include: High Life, This is Not a Film, Black Girl, Grey Gardens, and Jeanne Dielman, 23 quai du Commerce, 1080 Bruxelles.

New and Restored
February 6 – March 5, 2022 (monthly series)
A selection of recent restorations that have been painstakingly brought back to life in revived cinematic presentations. Films include Chameleon Street, an Official Selection at the 1989 Toronto International Film Festival (Festival of Festivals) and Winner of the Grand Jury Prize at the 1990 Sundance Film Festival; Gojira, known as “Godzilla” to generations of North Americans, presented in 4K in its original Japanese version; and legendary Ethiopian filmmaker Haile Gerima’s 1993 feature Sankofa, a previously untold history of Black resistance — based on 20 years of research into the trans-Atlantic trade of enslaved African people — newly restored and re-released by Ava Duvernay’s ARRAY in 4K.

MDFF Selects
February 17, 2022 (monthly series)
MDFF Selects features a showcase of the world’s best, most challenging, and most provocative new international cinema. The February instalment of this series spotlights the short film Kadıköy: Town of the Blind from Arca Arseven, a Turkish-born filmmaker currently studying at York University who edited the film in Canada during the pandemic, followed by the feature El Planeta from director, writer, producer, and actor Amalia Ulman, which was an official selection at Sundance and Film at Lincoln Center’s New Directors/New Films. MDFF co-founder Kazik Radwanski will host a Q&A with Arseven following the screenings.

See the North
February 24, 2022 (monthly series)
The latest installment in our free series of Canadian cinematic treasures is presented in celebration of the publication of Moments of Perception: Experimental Film in Canada, a wide-ranging and essential look at innovative cinema in the 20th and 21st centuries written by Stephen Broomer, Jim Shedden, Barbara Sternberg, and Michael Zryd, published by Goose Lane Editions, and distributed through University of Toronto Press. The authors will be present for the screening, and the book will be available for purchase. Films in this programme include Very Nice, Very Nice, Water Sark, Hybrid, Girl from Moush, Caribou in the Archive, Membrana Mortis (Dead Film), Lines Horizontal, Lines Postfixal, Plein Air Etude, Ransom Notes, and Black Rectangle.

Midnight Madness
February 26, 2022 (monthly series)
Since 1988, TIFF’s annual Midnight Madness programme has showcased the wildest and strangest cinematic provocations from around the world while cultivating an infectiously raucous audience experience. Fans of this series can look forward to screening a restored 35mm print of The Plastic Dome of Norma Jean from independent filmmaker Juleen Compton, whose few but remarkable films have recently been restored by the UCLA Film and Television Archive. Earning a special award at the 1966 Cannes Film Festival, The Plastic Dome of Norma Jean is about a teenage psychic (Sharon Henesy) and her enormous mail-order plastic dome that are exploited by a selfish band of young rock ’n’ rollers (including a 25-year-old Sam Waterston) in order to secure their own stairway to stardom.

TIFF’s digital platform digital TIFF Bell Lightbox features a selection of 100+ fan favourites, Cinematheque titles, and exclusive talks with some of the biggest names in film. Access some of the best art-house and archival cinema featuring stunning restorations and exclusive releases, available across the country, from the comfort of your home at digital TIFF Bell Lightbox.

TIFF Bell Lightbox cinemas are scheduled to reopen and welcome audiences back on Thursday, February 3, 2022. In keeping with COVID-19 safety protocols, theatres will be at 50% capacity and concessions will not be available. Masks are mandatory for all staff, visitors, and guests at TIFF Bell Lightbox and proof of vaccination is required to enter the building. Please check tiff.net/covid-19 for more details.

Digital Collectibles Platform Blockparty Partners with Warner Music Group
In the Relaunch of his Book, Within Oneself, Author and Entrepreneur Athanasios (Chris) Karamesines Provokes Thoughts and Inspires Souls.