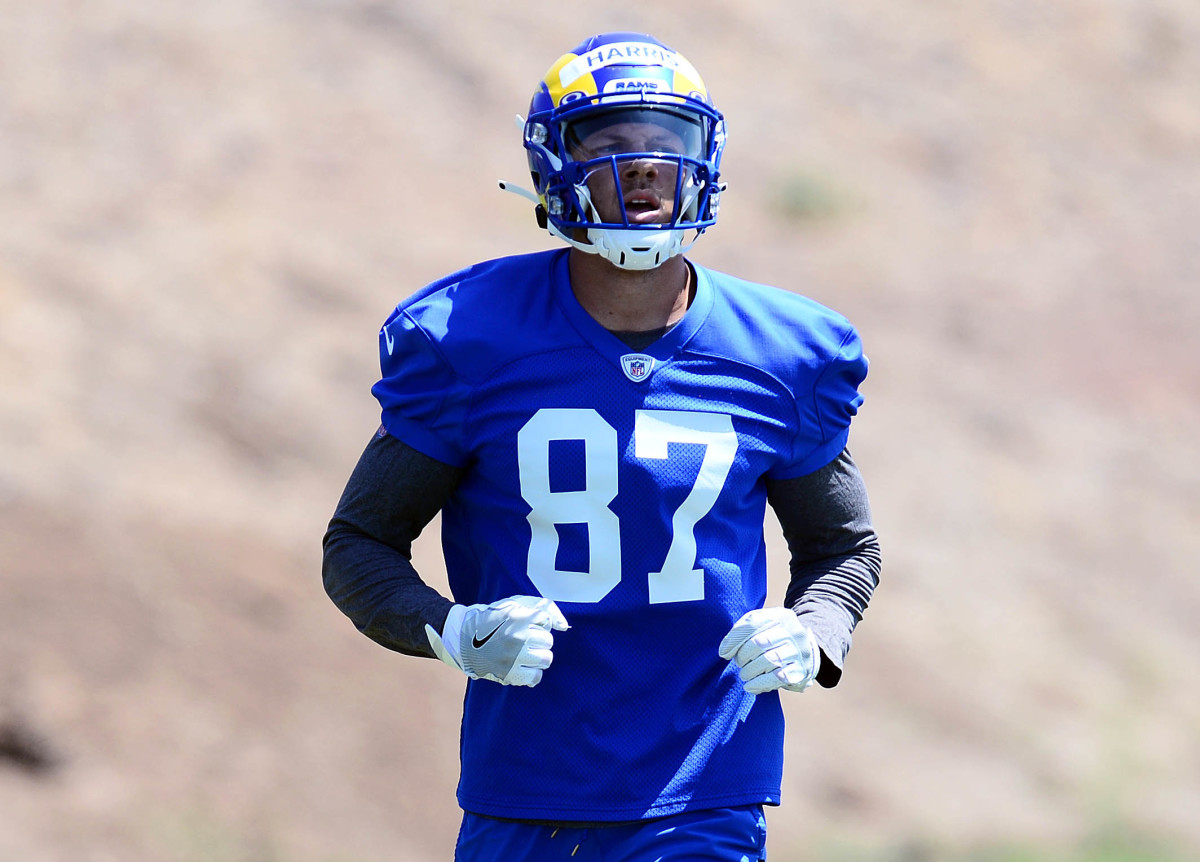 THOUSAND OAKS, Calif. — Jacob Harris cuts an imposing figure standing next to the rest of the Los Angeles Rams pass catchers on the practice field.

At 6-5 and 211 pounds, Harris looks more like a big receiver than a pass-catching tight end. However, the Central Florida product’s athleticism and ability to high-point the ball stood out during 7-on-7 drills in this week’s organized team activities open to reporters.

A fourth-round selection by the Rams in this year’s draft, Harris is someone who could contribute for Los Angeles during the regular season.

“Jacob Harris is a guy that’s definitely stood out,” said Rams head coach Sean McVay, when asked about players who have flashed among this year’s rookie class. “Just his overall speed and athleticism, you kind of feel him on the field. But that’s been in some of the limited, 7-on-7s and kind of running routes on air.

“That’s not how you really play football, so there is a real variance when you actually include the offensive and defensive lines. But just the overall athleticism and some of the things that he and Wes (Rams TEs coach Wes Phillips) have been working on the last few weeks in his improvement, he’s somebody that comes to mind.”

Another player who has caught the attention of McVay during offseason work is second-year pro Van Jefferson.

The Florida product had an impressive training camp during his rookie season last year but saw limited opportunities as the fourth receiver last year. However, with Josh Reynolds signing with the Tennessee Titans in free agency, Jefferson should get more snaps on the field as L.A.’s third receiver.

“I just think he’s got special receiver traits,” McVay said about Jefferson. “He’s got a great ability to work edges and separate. He’s got good, aggressive hands. You can see he’s really put the work in. He’s come back and established himself as a legitimate dude, a guy that we’re counting on for big things and I think the future is so bright for this guy.”

McVay went on to say Jefferson has been a major bright spot during offseason work and someone he’s excited to see during training camp and the regular season.

Running back Darrell Henderson Jr. had been working on the side during practice open to reporters for the last couple weeks but did participate in individual work.

Also, outside linebacker Terrell Lewis has not participated in practice open to reporters. McVay said he’s not sure where Lewis is health-wise and did not provide a specific injury status for Henderson.

Receiver Robert Woods also did not participate in practice on Thursday.

McVay said the expectation is all players will attend the mandatory minicamp starting on Tuesday next week — but also acknowledged there will be a few exceptions.

“It is technically a mandatory minicamp, but I would never pigeon-hole myself to saying one way or another,” McVay said. “I have conversations with all my players, and I’m a pretty understanding guy on certain situations, and I don’t anticipate anything that will be out of the norm or unexpected next week. Everybody (will be there), with the exception of a couple guys that I’m not going to get into, but I’ve talked to.”

A couple more things that stood out from practice this week.

With Austin Corbett at center and Bobby Evans at right guard, the Rams starting offensive line looks pretty stout up front. It will be interesting to see how they work together in the running game with a more experienced Cam Akers entering his second NFL season.

Cal Poly product receiver J.J. Koski has gotten some run with the starters and made some plays. Same with receiver Trishton Jackson.

Fourth-round selection cornerback Robert Rochell worked with the starters at cornerback and at 6-2 and 195 pounds, is a rangy athlete that could help during the regular season.

“He’s gotten more and more confident over these last couple weeks where we’ve actually been able to compete against one another, offense vs. defense in those 7 on 7 settings,” McVay said about Rochell. “The movement, the body type — all of those things are there. But I really like the improvement I’ve seen from him.”