To practice saving the world, NASA just crashed a spacecraft into an asteroid 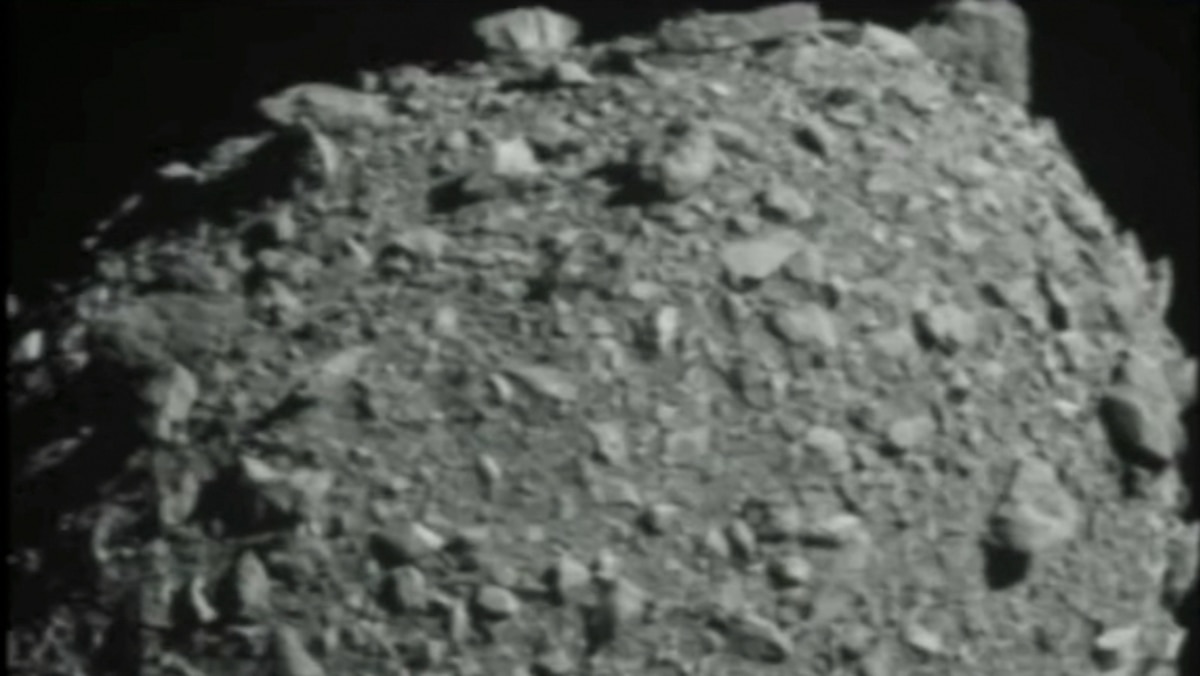 Laurel, MarylandNearly seven million miles from Earth, a spacecraft traveling more than 14,000 miles an hour smashed into a small, unsuspecting asteroid that had been floating through space undisturbed for eons.

The collision between NASA’s Double Asteroid Redirection Test (DART) spacecraft and a 500-foot-wide rock called Dimorphos, which took place at 7:14 p.m. ET, marks the first time humans have intentionally changed the course of a celestial object. It’s also the first test of a bold strategy that could be used to deflect any future asteroids that are on a collision course with Earth.

While scientists are confident that a large enough asteroid to cause planet-wide extinction will not threaten Earth for at least a hundred years—after which time it is difficult to predict their orbits—it is still possible that we could be surprised by a smaller, potentially city-destroying rock from space. And eventually, whether in hundreds or thousands or millions of years, it is all but certain that life on Earth will face an existential threat from an asteroid.

“I don’t really lose sleep about the Earth getting destroyed by asteroids, but I am excited about living in a world where we might be able to potentially prevent this in the future,” says Nancy Chabot of Johns Hopkins University’s Applied Physics Laboratory (APL) in Laurel, Maryland, which manages the DART mission. “This is just the first step, but isn’t it exciting that we’re going from science fiction to science reality?”

To practice shaping that reality, NASA sent DART hurtling toward its demise. As it approached, the spacecraft furiously snapped images of Dimorphos, which rapidly grew from a pinprick of light to fill its field of view—until the moment of impact, when everything went dark.

Dimorphos orbits a larger asteroid called Didymos, and the two asteroids are not considered threats to Earth—which is one of the reasons NASA put them in the DART spacecraft’s crosshairs for this first planetary defense test.

Discovered in 1996, Didymos, which means “twin” in Greek, is roughly a half-mile across and relatively well studied. But no one had ever gotten a good look at its tiny moonlet until just before DART smashed into it. Teams recently named the space rock Dimorphos, which is Greek for “having two forms”—one before the impact, and one after.

The collision resembles the desperate, last-minute attempts to save Earth from cosmic annihilation in Hollywood blockbusters. But unlike movie plots to blow up asteroids before they hit the planet, the DART impact wasn’t an attempt to obliterate Dimorphos. It was more of a flick—a nudge that packed enough of a punch to change the moonlet’s orbit without smashing it into pieces.

Making sure this strategy works will require some careful follow-up observations, and an impressive array of instruments have swiveled to monitor the Didymos system.

Three minutes after the collision, a cubesat called LICIACube arrived to surveil the wreckage. Over the next few days, the little spacecraft will beam images of the crash site back to Earth, where scientists will study them to learn more about the structure and composition of Dimorphos. NASA’s James Webb Space Telescope and Hubble Space Telescope were also trained on the Didymos system at the moment of impact, and Lucy, a spacecraft on its way to a strange population of asteroids that orbit near Jupiter, was close enough to observe the impact as well.

The goal of these observations is to look for any hints of brightening in the Didymos system, which will provide crucial information about how much dust and pulverized rock the impact kicked up. More than three dozen ground-based telescopes will now get to work making precise measurements of the moonlet’s new orbit. And in 2026, a spacecraft called Hera built by the European Space Agency (ESA), will arrive to monitor the collision’s aftermath.

“This inaugural planetary defense test mission marks a major moment in human history,” Bobby Braun, head of APL’s space exploration sector, said during a pre-impact briefing on September 12. “For the first time ever, we will measurably change the orbit of a celestial body in the universe.”

Our first look at Dimorphos

DART launched atop a SpaceX Falcon 9 rocket on November 23, 2021, and set sail for its rocky destination.

Didymos is what’s called an S-type asteroid, one of the more common types of near-Earth asteroids. Like many asteroids, Didymos is a relic of the infant solar system, containing preserved records of what our neighborhood was like 4.5 billion years ago.

Dimorphos, however, was a mystery until tonight. Scientists suspected it was made of similar materials to Didymos, and they guessed that it might be a loosely assembled rubble heap rather than a single shard, but its mass, shape, and composition were unknown. In the weeks leading up to the impact, team members started speculating about what it would look like—a dog bone or a donut, for example, would be tougher to hit. But a roundish blob would make for an easier target.

As DART streaked toward its rendezvous with destiny, the spacecraft’s onboard camera DRACO got its first good look at the moonlet: a lumpy egg-shaped moonlet with discernable boulders on its surface. About two minutes before impact, Dimorphos filled the spacecraft’s view. DRACO snapped images once per second, creating a close encounter sequence that contains a trove of science data—and also revealed that the mission had succeeded. When transmissions from DART ended, the team knew the spacecraft had struck its target.

“These images will continue until they don’t, so that’ll be a pretty definitive look into the final moments of the DART spacecraft,” Chabot said before the impact.

For most of its 10-month journey, the DART spacecraft couldn’t even see its target—instead, it was autonomously guided to its rendezvous with Dimorphos by onboard navigation software. After the asteroid pair came into view as a few small pixels, DART’s SMART Nav system locked on to Didymos. On final approach, about 50 minutes before impact, the system switched over to the moonlet and guided the spacecraft to its crash site. Making sure DART was locked on to the right object was crucial.

“That’s a very sweaty time for us,” Evan Smith, DART’s deputy mission systems engineer said at a briefing before the impact. “We’re going to be watching the telemetry like hawks, very scared, but excited.” If DART missed its target, the team wouldn’t have another opportunity until 2024.

“This is a par one course, so we’re going in for the hit this time,” Smith said. “We do have an opportunity coming up in two years, but we don’t want to play that round of golf.”

To test the crucial guidance system, DART’s DRACO camera swiveled to stare at Jupiter and its four largest moons in July and August of this year. Watching as the icy moon Europa popped out from behind the watercolored world, DART was able to practice locking on to a small object emerging from behind a larger one, similar to what the spacecraft would encounter as Dimorphos rounded the bend of its parent asteroid just before the collision.

“The dart itself is only 2.5 millimeters—it’s tiny—and you take the dart at JFK and you throw it to Dulles, and you hit the center of the bull’s-eye, except you don’t know where the dartboard is at,” Adams told reporters.

The search for deadly asteroids

Asteroid deflection technology will only be useful if there is something to deflect, which is why NASA and other institutions are focused on finding and tracking all the space rocks that could be on Earth-crossing orbits.

“We’re not aware of a single object right now, within the next hundred years or so, that’s really threatening the Earth. I also guarantee you that if you wait long enough, there will be an object,” Thomas Zurbuchen, NASA’s associate administrator for science, said at the pre-impact briefing. “How do I know that? Because as we go back in time, these objects have really affected our history. We have a geologic record to prove that.”

Earth’s evolution has been molded by impacts from the very start. Comets and asteroids have pummeled the planet since it was a molten planetary embryo. Some of these objects delivered the water that now fills Earth’s oceans, lakes, and streams. Others ignited cataclysmic mass extinctions.

Scientists suspect we’ve located the bulk of potentially harmful asteroids, defined as bodies more than 450 feet across that come within five million miles of Earth. Most of the largest, which are more than six miles across and could cause a global extinction event, have been found. And the space agency estimates that it has discovered roughly 95 percent of asteroids that are about the size of Didymos. But smaller bodies, about the size of Dimorphos, are harder to identify and track. Rocks that size could obliterate a major city, and NASA estimates that we’ve found less than half of those objects.

“The most important thing we have to do first is find the population of hazardous asteroids out there,” Lindley Johnson, NASA’s planetary defense officer, said at the briefing. “We have the technology now to do this and to find these objects years, decades, even a century before they pose an impact threat to the Earth.”

Finding the remainder of these asteroids, Johnson says, will need to be done from space. In the coming years, NASA plans to launch a telescope called the Near-Earth Object Surveyor, which will be able to pick up the infrared signatures of space rocks that are hidden by the glare of the sun, helping to make sure humanity doesn’t get blindsided by an unseen asteroid in the future.

After the dust settles

In the days and weeks after the DART impact, ground-based telescopes across all seven continents—including the Green Bank Telescope in West Virginia, the Goldstone Deep Space Antenna in California, and the Very Large Telescope in Chile—will precisely measure the moonlet’s new orbit.

For DART to have achieved its goal, the impact needs to have shortened Dimorphos’s 11-hour, 55-minute orbit by just 73 seconds. But Chabot expects to see a much larger shift, closer to 10 minutes or so.

“It might be 20 minutes; it might be five minutes,” she said. “That’s going to be related to how much ejecta is thrown off, how much pulverized rock and material is in this energetic collision … That’s one of the main reasons for doing this full-scale test in space.”

How much that orbit changes will help scientists learn more about the moonlet, but more importantly, it will tell us whether this type of kinetic impactor is a viable option for deflecting hazardous asteroids. If the day comes when we need to knock an asteroid off course for real, the information from DART could be crucial for successfully saving the world.

“If you were going to do this for planetary defense, you would do it five, 10, 20 years in advance,” Chabot said. “Give it a small nudge … You’re not trying to make yourself a problem where you destroy an asteroid, and you make a lot of different pieces.”

If the DART mission is successful, we’ll have at least one tool in the shed to ward off incoming dangers in the sky.

“Doing so has clear benefits in ensuring humanity’s ability to deflect a potential threatening asteroid in the future,” Braun said. “It also speaks volumes to how far our space program has come in just the last 60 years and how important the space program can be to all of us here on the Earth.”

If the dinosaurs had a space program, the joke goes, they’d still roam the Earth.