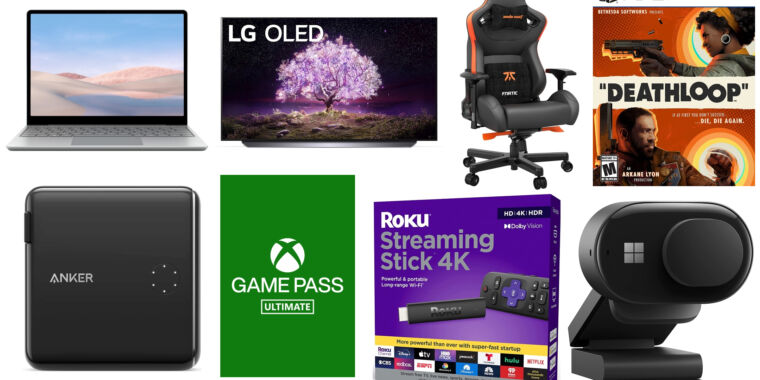 The Dealmaster has finished reading Ars’ mammoth macOS 12 review, which means the time has come for another roundup of the best tech deals we could find from across the web.

Today’s rundown is headlined by a few notable discounts on LG’s line of C1 OLED TVs, as both the 48- and 55-inch models are down to new lows of $1,100 and $1,300, respectively, at various retailers. Both deals are about $200 off the usual prices we’ve seen online since the C1 launched earlier this year. They join a roughly $300 discount on the 65-inch model that first arose toward the end of September, also marking the lowest price we’ve tracked.

The C1 is more or less the flagship model in LG’s current line of OLED TVs, as it generally offers the best mix of price and performance. We don’t typically review TVs at Ars, but like most of its OLED predecessors, the C1 has garnered widely positive reviews for producing stellar picture quality (largely thanks to the super-deep contrast of good OLED panels), smooth motion, wide viewing angles, low input lag, a thin and attractive design, and a user interface in webOS that supports most of the major streaming apps and isn’t a total pain to use. It has gamer-friendly features like four HDMI 2.1 inputs and variable refresh rate support, and it works with all of the most commonly used HDR standards.

There are still the usual caveats with OLED TVs: They generally can’t get as bright as the best LED models, which can be bothersome in brightly lit rooms, and there’s still some risk of “burn-in” if you leave a static image onscreen for (seriously) extended periods of time. The C1 here isn’t a significant upgrade over last year’s LG CX, either, though as of this writing, it’s available for less than that previous model.

The main holdup might be that Black Friday, which is typically a fruitful time for TV deals, is right around the corner. While these are the best prices we’ve seen for the C1 thus far, we don’t know if even bigger discounts will arrive in the coming weeks. For reference, the 55-inch LG CX went for $1,200 around that time last year. Nevertheless, if you want to pick up a new high-end TV today, the C1 should be a good bet.

If you aren’t looking to drop the big bucks today, though, our roundup also has a $15-off deal on Roku’s new Streaming Stick 4K media player, a one-month-for-$1 promotion for new or lapsed subscribers to Microsoft’s Xbox Game Pass Ultimate service, the first big discount on the much-ballyhooed game Deathloop, a couple of deals on well-reviewed Dell monitors, and much more. Take a look at our full curated rundown below.

Ars Technica may earn compensation for sales from links on this post through affiliate programs.

Featured deals of the day