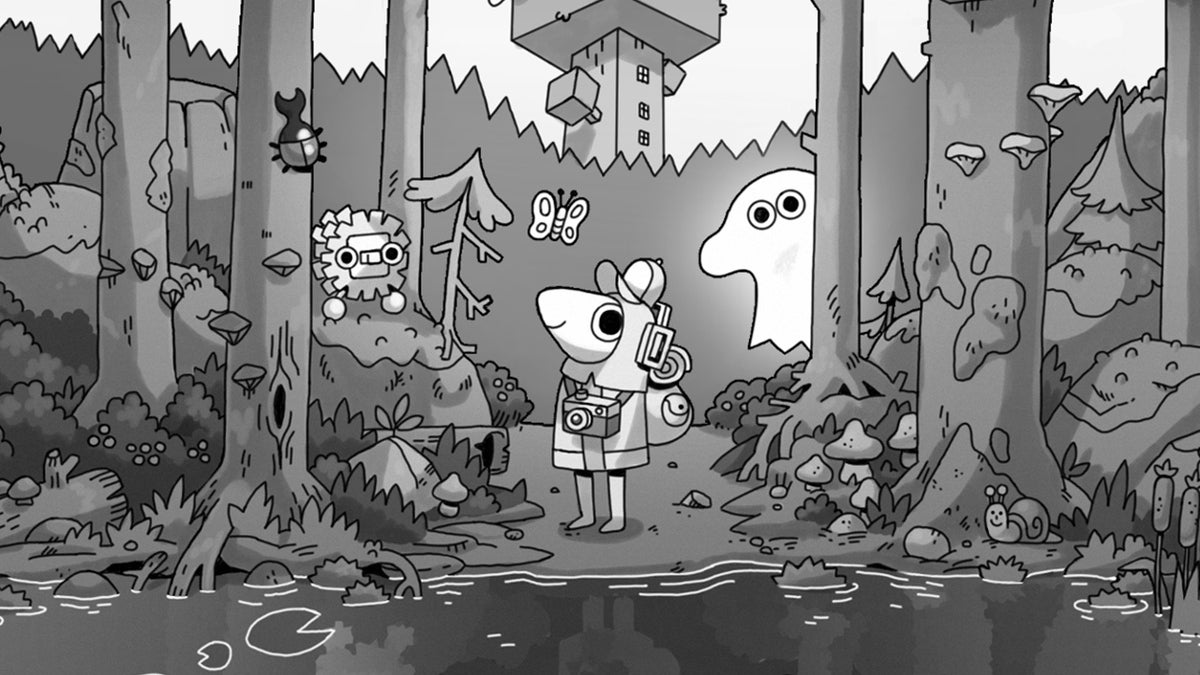 It’s one thing to call a game “small,” maybe referring to its length or something about its quaint aesthetics. But TOEM, a game about the joy of photography, is small in the way a snow-topped winter cabin is small, or a sleeping cat is small, or a plate of cube-shaped cheeses and nicely sliced meats is small. It’s small in totality; pristine, complete, and precise. It’s perfect for snuggling under a blanket on a quiet evening with a scented candle and a mug of cocoa to finish in one contented sitting.

TOEM starts with smallness in premise: a young protagonist, equipped only with a camera given to them by their mother and a pair of clogs, is now old enough to journey through their little top-down, black-and-white world to see the sights, take photos, and finally witness TOEM’s titular phenomenon: a spectacle described in the opening minutes with awe-struck vaguery. After departing from their quiet hometown, they visit adorably diverse areas including a dense forest with a woodland hotel, a seaside town featuring both sunny beaches and stormswept coastline, a bustling city full of rushed business folk, and a snowy mountain peak, helping members of the community with their camera along the way.

The initial camera functions are simple ones: you can zoom in and out, or flip it to take a selfie. Later, it gets a little bit deeper when you get a tripod that lets you set up specific shots, and a horn you can honk to elicit goofy reactions from your subjects. Rain, snow, and mud can spatter your camera lens, though certain items or interactions will clear this problem up if you don’t like it. Beyond these, don’t expect more elaborate photo editing tools from TOEM — but of course, just five minutes with it is enough to know that fancy camera functions would be utterly beside the point.

TOEM doesn’t gamify its photography further than “take a photo of this” to solve a puzzle or progress forward. There’s no photo scoring and no Pokemon Snap-like rarity system. In a different kind of photo game, this simplicity might have been a disappointment, but for the most part I didn’t miss it in TOEM. The cute, humorous scenarios TOEM rewarded my curiosity with were almost always satisfying enough without having to try and set up some perfect shot, and even without a quest or a reward to motivate me, I often found myself framing goofy selfies with characters and places I liked just because I wanted to.

Good photos tell stories, and good photo-taking games tell many stories; therefore, TOEM is a very good photo-taking game. Though its bookend areas are short by storytelling necessity, the rest are densely packed, intricate, and diorama-like in their design, giving the feel of playing around with an exceedingly well-made set of paper dolls or a 3D comic book. Each map is stuffed with pleasant moments featuring characters like a grouchy newspaper boss who’s rightfully proud of his mustache, a balloon family celebrating a birthday, or a DJ moose performing one heck of a set to an audience of glow stick-waving fans. The busy-ness of one or two areas (specifically ones with intense weather) did start to noticeably cause the game to chug on the Switch, but this was limited to those locations and was only a brief, minor annoyance.

There are longer stories, too, like the investigator you run into in each town who’s after a shady character hiding in the scenery, or a series of ghosts tired of having to do everything for themselves. Most of TOEM’s encounters happily marry the ordinary with either myth or absurdity, elevating day-to-day moments by asking you to look a little closer through a camera lens and appreciate the ways in which an army of ants might be just as delightful as a towering snow monster.

Many of these little photographed stories are useful for moving forward, as community service is rewarded with free bus rides to the next area. You’ll have to help out a handful of folk in each area through photo taking, fetch quests, or exploration in order to reach your eventual goal. For instance, you might need to use your zoom lens to identify all the items gumming up the machinery in a power plant to get a bridge to lower, find a lost dog, or take photographs of a snowman’s scattered body parts for an upset snowman builder. You’re free to take on whichever tasks you want to reach the quota for moving on, so if you get stuck on one it’s simple enough to just swap your focus to something else. But TOEM’s humorous, grounded writing was so enjoyable and its characters so silly and pleasant that I was eager to try and finish every possible task presented to me just to see all its world had to offer.

And it was easy to go beyond even that, as TOEM also comes with a short list of achievements, collectible clothing items, a critter compendium you can fill with photos of cats, dogs, bugs, and other animals, and plenty of surprising photo interactions to stumble across as you go. You can also collect a number of catchy, soothing music tracks from composers Launchable Socks and Jamal Green, which will dip in and out as you wander through the world and offer both musical accompaniment and also, critically, occasional silence to appreciate TOEM’s superb sound design.

All together, I only spent about three hours finishing TOEM’s story and an extra hour after that finding every last secret. I could have happily stayed longer, but TOEM was such a precise, neatly wrapped little box of a game that I feel greedy asking for more. It’s complete in a way I feel games often struggle to be, like a rare TV show that ends exactly how the writers intended after just a season or two, or a tasty meal that’s filling rather than stuffing. I think there’s something brave and wonderful about wanting to make something that is deliberately small in an industry where padded length and grand scope and scale are often equated with value by many people. I love walking away from a game feeling this content.

TOEM is a short, satisfying little photography adventure packed with witty writing, goofy yet grounded characters, and a wealth of interesting, picturesque moments to capture. Though simple to complete, its diorama-like maps, cartoon style, and pleasing music and sounds make it an inviting world to stay in long enough to uncover all its secrets. Unpretentious and clever, TOEM encourages its audience to elevate the most seemingly mundane encounters through the scrupulosity of a camera lens, splashing its world with enough myth, humor, and joy to turn every moment into a photographable phenomenon as intriguing as the one in its title.