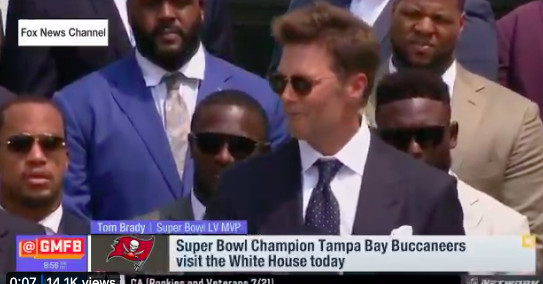 Buccaneers quarterback Tom Brady met President Joe Biden at the White House Tuesday during the team’s championship visit, and he had jokes about the former occupant of the house.

“Not a lot of people thought that we could have won, and the fact is about 40 percent of people still don’t think that we won. Do you understand that Mr. President?”

A laughing Brady was clearly referencing the 2020 presidential election, in which 53 percent of Republicans asked in a Reuters/Ipsos poll still believe Trump is the president, despite losing the electoral college, and popular votes in an election which has been scrutinized, and verified as being completely accurate.

It’s a pretty remarkable shift for Brady, who typically aims to be as apolitical as possible, choosing to not rock the boat, rather than making his feelings known. Brady infamously had a “Make America Great Again” hat in his locker during his time with the Patriots, prompting questions about his political beliefs, which Brady routinely dodged, saying it was a “gift from a friend,” rather than saying it was a political statement.

The NFL Network quickly cut away from Brady’s joke, while the quarterback’s teammates laughed, along with the president.