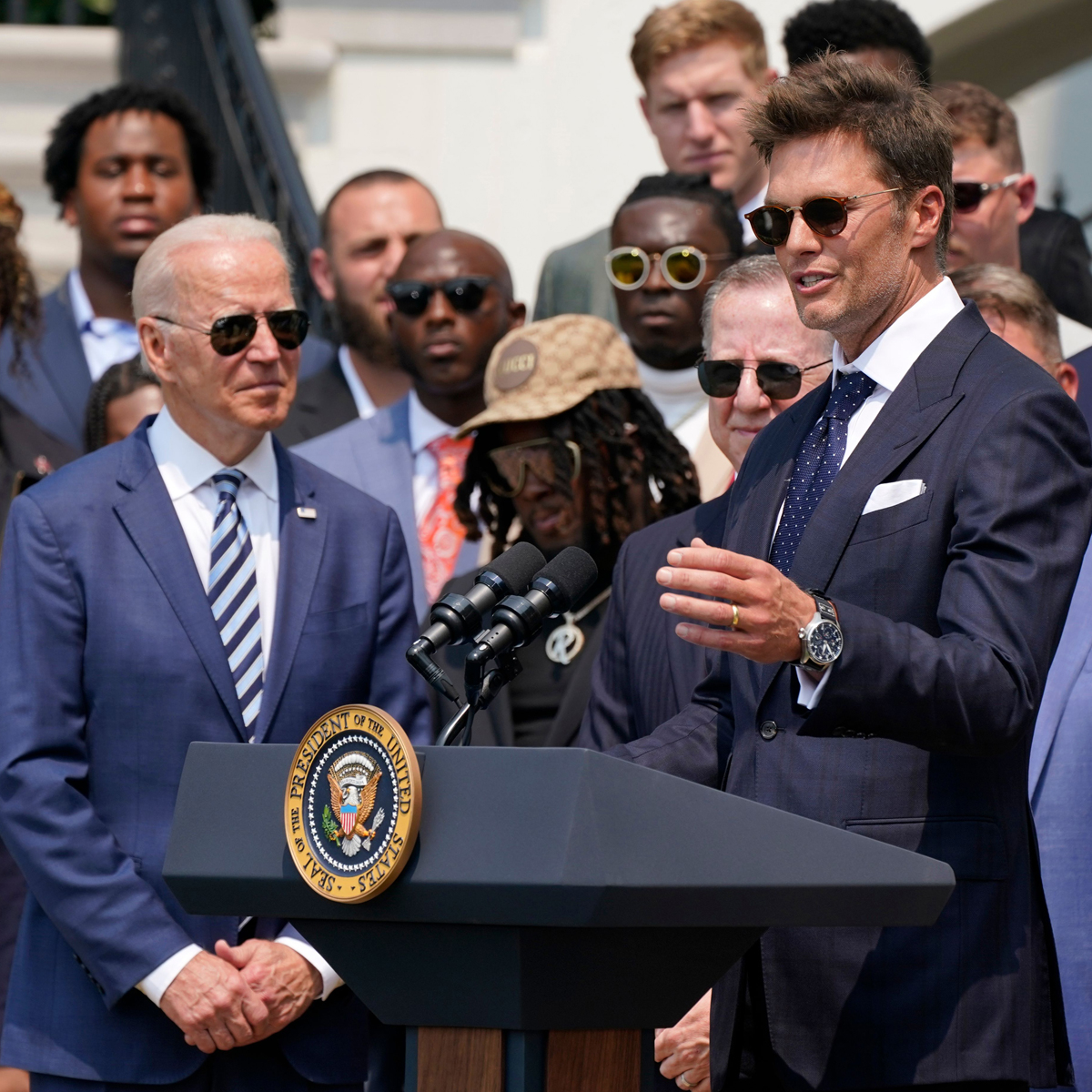 While celebrating his Super Bowl win at the White House, Tom Brady made a joke about those that continue to deny President Joe Biden won the 2020 U.S. presidential election.

“It was actually very challenging seasons for a lot of reasons, but we bonded together,” the Tampa Bay Buccaneers quarterback said of his team during his speech on July 20. “We worked really hard, we put all our individual agendas aside and we came together as a team.”

Brady, 43, explained how his “struggling” team triumphed, despite their 7 and 5 record and doubts from their fans. “We found our rhythm. We got on a roll. Not a lot of people, you know, think that we could have won,” he said.

Then, he compared his own Super Bowl skeptics to election deniers, who doubt the results of the presidential race.

“In fact, I think about 40 percent of the people still don’t think we won,” Brady said. Biden interjected, “I understand that.”

Brady, who wore Aviator sunglasses similar to the president’s, went on to say, “Yeah. And personally, you know, it’s nice for me to be back here.”

He shared an anecdote about how he was subjected to the same nickname that former President Donald Trump used for Biden.

“We had a game in Chicago, where I forgot what down it was. I lost track of one down in 21 years of playing, and they started calling me ‘Sleepy Tom.’ Why would they do that to me?” he recalled.

The clip of Brady’s speech went viral on social media, as fans discussed Brady’s past connection with Trump.

In 2015, Brady said Trump sent him a “Make America Great Again” hat through Patriots owner Robert Kraft. “He always gives me a call and different types of motivational speeches at different times. So now that he’s running for president, he sent me a hat, and he gave it to R.K.K. a couple weeks ago. So it found its way to my locker,” Brady said, according to TIME.

However, Trump later asked Brady to speak at the 2016 Republican National Convention, but Brady declined, the NFL star told Howard Stern in 2020. “I wasn’t going to do anything political,” Brady told the radio host, per The Hollywood Reporter. “The political support is totally different than the support of a friend… I didn’t want to get into all the political—it is zero win anything.”

Tom Brady: “Not a lot of people think that we could have won and, in fact, I think 40% of the people still don’t think we won.”

President Biden:” “I understand that.”

Brady: “You understand that Mr. President?”

Brady and Trump became acquaintances around 2002, when The Apprentice host asked the athlete to judge a Miss USA pageant, according to THR.

Some of the pair’s earliest public photographs together were taken at a Floyd Mayweather wrestling match in 2005 and while golfing at the Trump International Golf Club in 2006.

Watch Brady’s jab in the CSPAN video above.

Watch a brand new episode of Nightly Pop Monday through Thursday at 11:30 p.m., only on E!