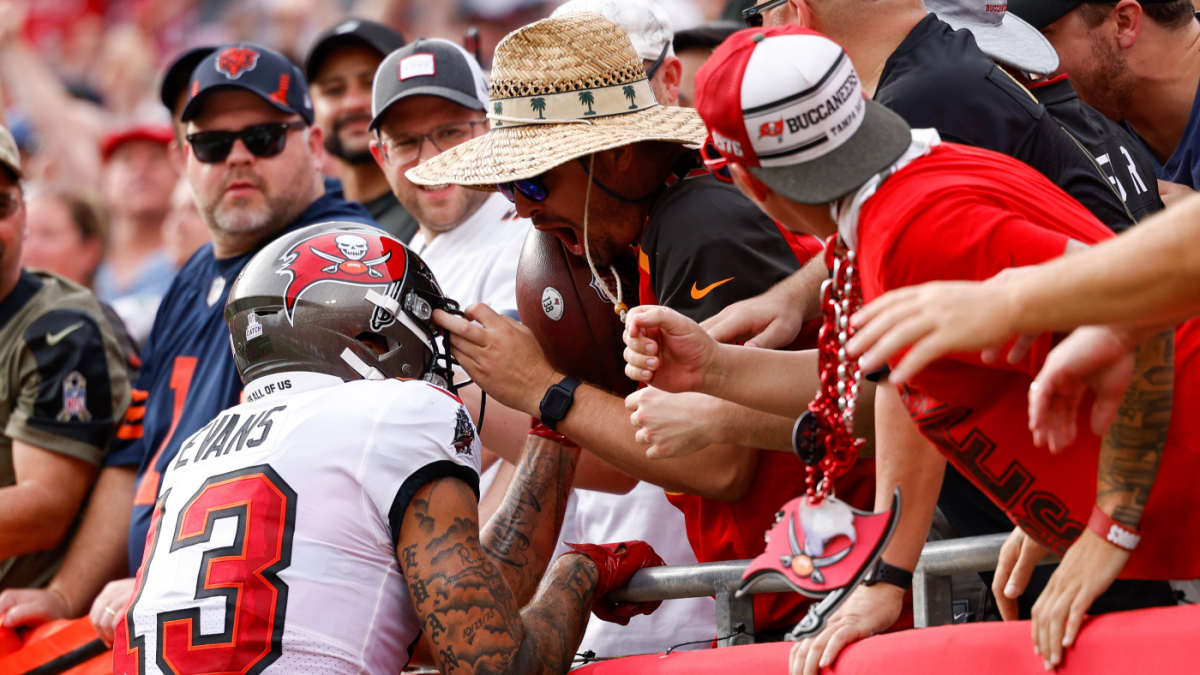 After nearly 24 hours of haggling, it seems that Tom Brady and Buccaneers super fan Byron Kennedy have finally agreed to a deal for the football from Brady’s 600th career touchdown pass. However, it’s still not clear if Kennedy will get the one thing he wants most out of the deal: A round of golf with the seven-time Super Bowl champion.

Kennedy ended up with the milestone football because Mike Evans gave it to him after catching Brady’s 600th career touchdown pass during the first quarter of Tampa Bay’s 38-3 win over the Bears. The Buccaneers fan actually filmed Brady’s pass as it happened and it appears Evans decided to give him the ball because Kennedy was wearing an Evans jersey.

Since the game was a blowout, the only drama the Buccaneers had to deal with on Sunday was whether they would be able to get the ball back from Kennedy.

During an interview with the NFL Network on Monday, Kennedy actually revealed that he didn’t want to give the ball back when the team first approached him.

“The [Buccaneers staffer] came up and basically said, ‘Can we get the ball back?’ And my first reaction was ‘No,'” Kennedy said. “I told him, ‘You can’t have the ball back. I’d never gotten a football like this, this is the coolest thing ever. No.'”

After initially telling the team no, Kennedy relented after finding out that Brady personally wanted the ball back.

“We went back and forth a little bit and he was basically saying, ‘Tom Brady really wants the football,'” Kennedy explained. “Like I said earlier, you can’t say no to Tom Brady. He’s asking for his 600th touchdown football back, he’s the one who earned it. I just got lucky and happened to be there at the right time.”

According to multiple reports, the ball is worth an estimated $500,000, which Kennedy definitely didn’t know at the time.

“I was just so happy to get a touchdown ball from Mike Evans,” Kennedy said. “I had no idea how significant it actually was.”

In exchange for the ball, the Buccaneers made a pretty generous offer that Kennedy accepted and that offer included the following:

Brady also threw in one Bitcoin for Kennedy, which is currently worth roughly $62,000.

Although that’s a solid package, there is one more thing that Kennedy is hoping to get out of the deal.

“Maybe play a round of golf with Tom as a repayment,” Kennedy said. “That would be pretty cool.”

Even though the round of golf wasn’t mentioned as part of the package that Kennedy eventually got for the ball, that doesn’t mean it won’t happen. It’s possible Brady could make some time to play a round with him at some point during the offseason. Of course, even if that doesn’t happen, Kennedy definitely scored a solid return in exchange for the football.

One other thing: Kennedy doesn’t regret giving the ball back even though it’s worth half a million dollars. The 29-year-old said he wasn’t planning to sell it no matter how much it was worth.

“People are saying that I could have made a half million dollars or something like that, but had I kept the ball, I wasn’t going to sell it,” Kennedy said. “It would have sat in my office at home.”

Now, instead of putting the 600th touchdown ball in his home office, he’ll have two Brady jerseys, a helmet, a Mike Evans jersey and some cleats to put there, which should make for some pretty nice decorations in his home office.