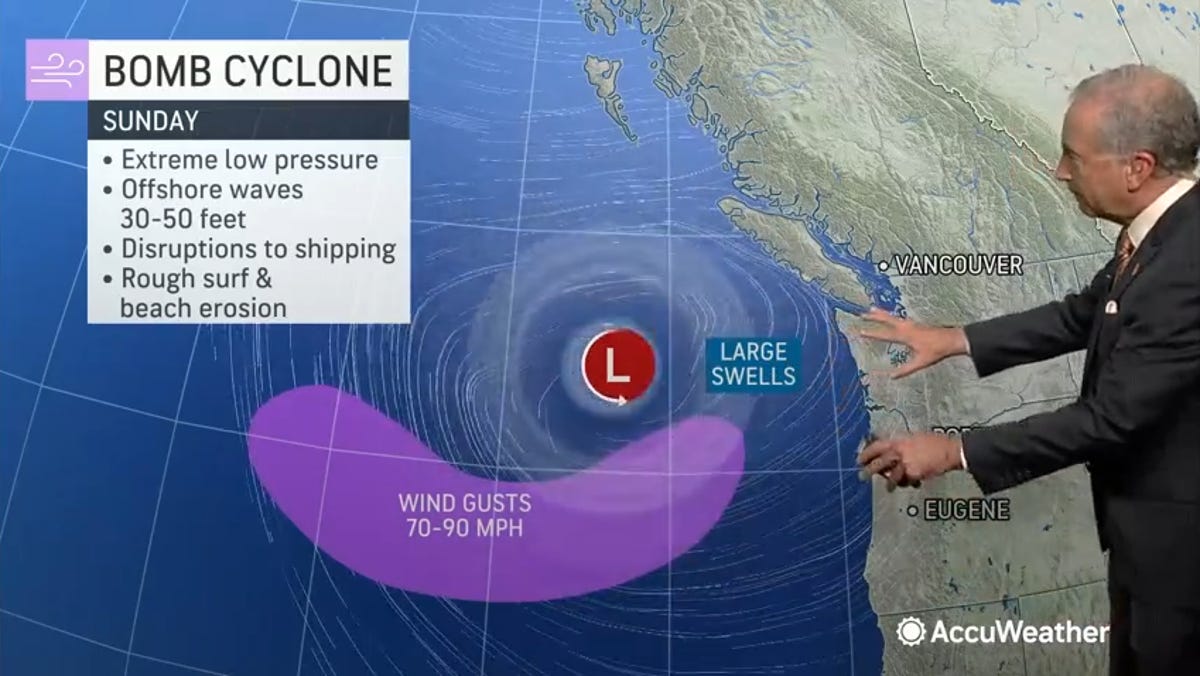 A “bomb cyclone” cranking up Sunday in the Pacific Ocean will unleash more than a foot of rain in some areas of drought-stricken California and up to 8 feet of snow over the mountains, forecasters say.

Much of the West Coast is beginning to feel the effects of the deepening low-pressure system off the Pacific Northwest coast, the National Weather Service’s Weather Prediction Center said Sunday. A bomb cyclone forms when air pressure rapidly drops as the storm explosively strengthens.

“Conditions will continue to deteriorate as the system approaches,” the center tweeted. “Strong winds, high surf, and heavy rain will lead to major impacts. Heavy snow in the Sierra starting tonight.”

Seventeen major wildfires are burning in California, Idaho, Montana, Oregon and Washington, according to the National Interagency Fire Center. Wildfires have burned almost 2 million acres in California in 2021 alone. The storms will effectively end the wildfire season in much of the region, AccuWeather Meteorologist Jon Porter said.

“This rainfall is coming about a month ahead of average and will be very welcome in fighting the remaining fires, particularly in Northern California,” Porter said.

‘Deluge’ in a drought: Millions of Californians warned of flash-flooding risk on Sunday

The bomb cyclone was forecast to pull in deep tropical moisture from the Pacific, creating an “atmospheric river.” Porter describes an atmospheric river as a “firehose of moisture in the sky” capable of unleashing intense rain and mountain snow.

Moisture from the developing atmospheric river is taking aim at the northern and central portions of California as well as part of southern Oregon, with the greatest intensity from this morning to Monday, he said.

Rainfall of up to 2 inches an hour may come “too fast and too furious,” leading to serious flooding and mudslides that could threaten lives and property, Porter added.

The National Weather Service in Sacramento issued a flash flood and debris-flow warning for the Dixie Fire, now 97% contained but a blaze that has burned almost 1 million acres since it ignited more than three months ago.

“Heavy rain is starting to move in and this will cause debris flows,” the weather service warned. “If you live near a recent burn scar now is the time to prepare and listen to local officials for any evacuation information.”

This news is developing into the evening. For an update later tonight, sign up for the Evening Briefing.