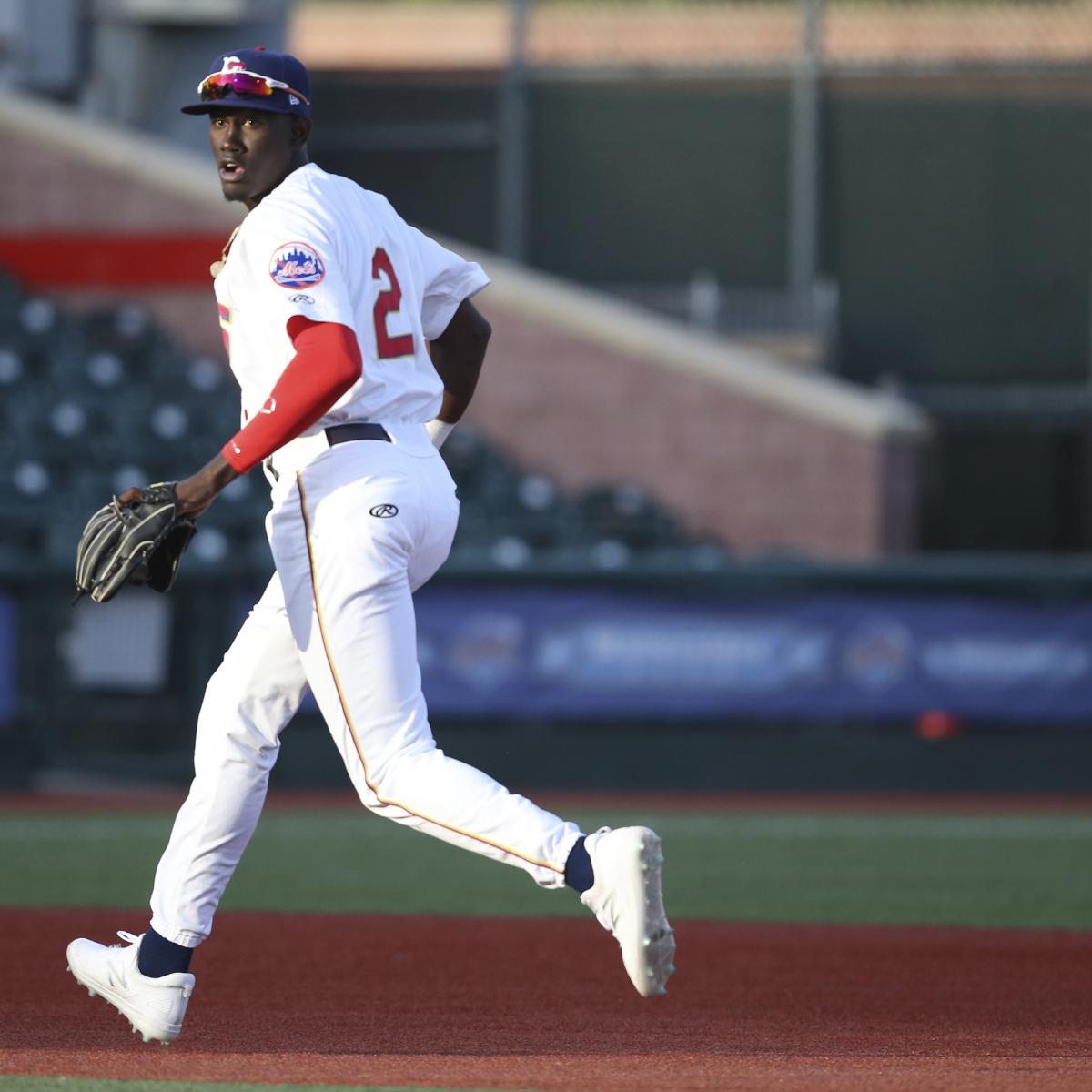 The Mets will be buying, and they have a talented young shortstop to offer.Vera Nieuwenhuis/Associated Press

With the July 30 trade deadline just days away, we could talk all the livelong day about which Major League Baseball stars could soon be on the move.

But lest anyone forget, the stars of tomorrow will also be involved in upcoming trades.

To ensure nobody forgets this, we compiled a list of seven top-tier prospects who could be dealt by their parent clubs between now and next Friday. Though they can be found on top-100 lists at MLB.com and elsewhere, they are nonetheless expendable to one degree or another.

Before we begin, a fair warning that our list consists entirely of position players. There are certainly talented pitchers in the minors, but it happens that many are in the hands of likely sellers. The ones in the hands of buyers seem to be untouchable.

There isn’t much question Nolan Gorman is the St. Louis Cardinals’ most valuable trade chip among their prospects.

Just three years after the Cards drafted him 19th overall, Gorman is the club’s No. 1 prospect and the No. 28 prospect in baseball for MLB.com. Despite some swing-and-miss issues, he is starting to live up to his lofty slugging potential while also expanding his defensive profile in the high minors.

With Nolan Arenado entrenched at third base and Tommy Edman holding it down at second base, Gorman would arguably serve St. Louis better as a trade chip than as a long-term building block. Especially if he could land the team a controllable starting pitcher, such as Jose Berrios or German Marquez.

Since the Cardinals are just 17-26 since May 30, however, president of baseball operations John Mozeliak is understandably on the fence about buying at the deadline. And even if he does buy, he might want to wait until after Arenado forgoes his post-2021 opt-out before swapping Gorman.

In January, Ken Rosenthal of The Athletic caused a minor stir when he reported rival clubs were “routinely” asking the San Francisco Giants about Joey Bart.

Bart was and still is one of baseball’s best prospects—MLB.com lists him 17th overall—so the idea that the Giants would trade him was perhaps absurd. But then again, he wasn’t drafted by current president of baseball operations Farhan Zaidi, and he hadn’t exactly impressed in the majors in 2020.

Fast-forward to now, and Bart has reclaimed some value by lighting things up at Triple-A. Yet aside from a two-game cameo with the big club, he has been stuck behind resurgent veteran Buster Posey as San Francisco has surprisingly risen to the top of MLB’s ranks with a 59-35 record.

With fellow catcher Patrick Bailey struggling in the low minors, however, Bart has effectively resolidified his standing as the heir apparent to Posey. And while the Giants certainly have needs to fill, Zaidi sounds reluctant to part with any of the club’s top prospects for the sake of filling them.

As if the New York Yankees didn’t already have enough problems, a COVID-19 outbreak decimated the team’s depth ahead of its second half-opening series against the Boston Red Sox.

On the plus side, the Yankees took two of three in that series and are still generally in both the American League East and wild-card races despite their issues. So, even if general manager Brian Cashman has previously refused to rule out selling, New York seems poised to do some buying.

Though uber-prospect Jasson Dominguez almost certainly won’t be going anywhere, the Yankees might sell high on Oswald Peraza. After modest returns in his first three professional seasons, the sweet-swinging, slick-fielding shortstop has climbed into MLB.com’s top 100.

But since Gleyber Torres is on shaky ground as the club’s long-term shortstop, New York might deem it wise to keep Peraza. And even if it does make him available, there’s the question of whether he alone can net the kind of controllable stars (i.e., Joey Gallo) the Yankees seem to covet.

As Ben Nicholson-Smith of Sportsnet and others reported, there was talk in June of how badly the Toronto Blue Jays needed bullpen help and a left-handed hitter.

Though they’ve made deals for hurlers Jacob Barnes, Adam Cimber and Trevor Richards and outfielder Corey Dickerson, the Jays still need relievers and could arguably use a starting pitcher as well. If they want to go big to fill those needs, they might dip into a third-ranked farm system that houses three Tier 1 talents.

Of those, Jordan Groshans seems to be the most superfluous. He’s not only looking up at Bo Bichette and Cavan Biggio in the Toronto infield, but he’s also not as highly regarded as Fisher Cats teammate Austin Martin.

Groshans nonetheless ranks as MLB.com’s No. 32 prospect, so his standing in the prospect world could be strong enough to net, say, Craig Kimbrel, Richard Rodriguez or even German Marquez. The only question may be if the Jays would rather go for more quantity in lieu of making the leap for quality.

With the Padres struggling to keep up with the Giants and Los Angeles Dodgers in the National League West, it seems likely Preller will go back to the well before July 30. In particular, his club needs pitching depth to account for a distressingly long list of injured hurlers.

Though left-hander MacKenzie Gore (struggling) and shortstop CJ Abrams (leg) are probably off the table, Preller might dangle MLB.com’s No. 3 catching prospect, Luis Campusano. Though he’s a well-rounded talent and has already logged time in the majors, he is stuck behind Victor Caratini.

One catch, though, is that neither Caratini nor the injured Austin Nola has Campusano’s upside as a cornerstone catcher. And since he has plenty of other chips to pull from the team’s eighth-ranked farm system, Preller might be able to hang on to Campusano and still make substantial upgrades.

Even though the Dodgers boast the majors’ second-best record and best run differential at plus-151, they can’t afford to let the trade deadline go past without a major move or two.

Specifically, Mark Feinsand of MLB.com reported the Dodgers are in the market for starting pitching. As well they should be, given that ace Clayton Kershaw (forearm) is on the injured list, fellow ace Trevor Bauer is on administrative leave amid a sexual assault investigation and Dustin May (Tommy John) is out for the season.

Against this backdrop, it wouldn’t make much sense for the Dodgers to deal right-hander Josiah Gray. Keibert Ruiz, though, is a different story. He is blocked by Will Smith and Austin Barnes, and plenty of sellers would surely love to have an MLB-ready catcher.

Even if Ruiz is MLB.com’s No. 41 prospect, Dodgers president of baseball operations Andrew Friedman is no stranger to dealing top prospects for major upgrades. And considering the team’s need for pitching, he should look to do more of the same.

To the extent that they’re in first place in the National League East, the New York Mets are right where they want to be in their first full season under new owner Steve Cohen.

Yet the Mets would probably prefer to have a run differential better than plus-eight, and their injured list houses ace Jacob deGrom (forearm), shortstop Francisco Lindor (oblique) and a few other stars. In other words, they need all the help they can get at the deadline.

Though Mauricio is MLB.com’s No. 50 prospect, he is only the Mets’ fourth-best prospect in our rankings. Since he’s also blocked by Lindor, if anything it’s hard not to imagine he will be with another organization come July 31.