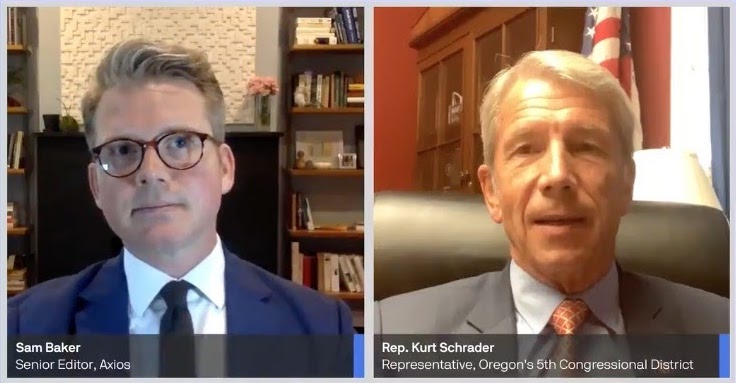 The news site Axios in July hosted an event with Rep. Kurt Schrader (D., Ore.), a member of a House subcommittee on health and the sponsor of legislation that would provide federal funding that allows companies to sell knockoff drugs virtually identical to those that originated with their competitors.

The event was sponsored by the pharmaceutical company Viatris, which spent $3.6 million lobbying in favor of the drugs, known as biosimilars, and has contributed to Schrader’s campaigns.

The Axios event—”A Conversation on biosimilars and drug development”—featured the organization’s reporters, who touted biosimilars as an innovative approach to “lowering the cost of treatment in the U.S.,” alongside Schrader, who lauded pharmaceutical companies for their willingness to “be part of the solution.” The event was followed by a tweet from Axios‘s account, which boasts nearly 600,000 followers, that broadcast Schrader’s support for biosimilars and noted the Viatris sponsorship. 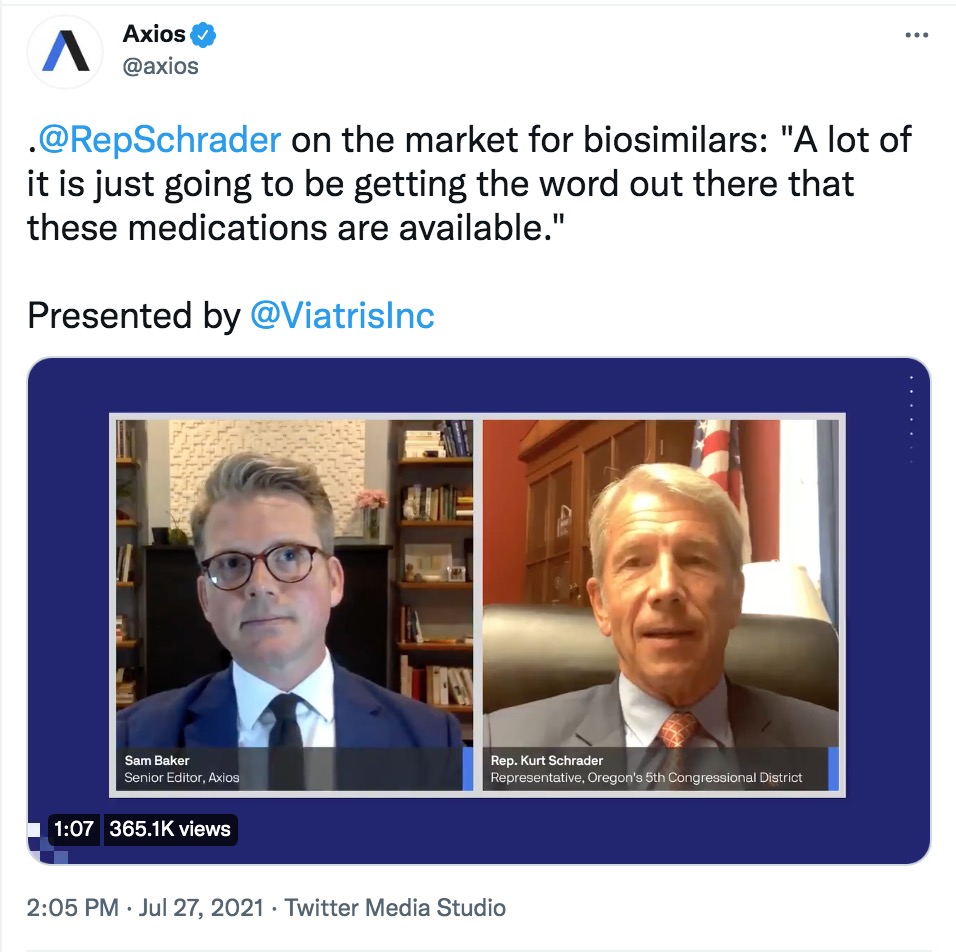 The event provides a window into a growing frontier of influence peddling in the nation’s capital, as news outlets like Axios—whose slogans include “no B.S. for sale”—show how the ostensibly unbiased news outlet makes money by facilitating events for companies with the lawmakers they hope to influence. Over the past several years, Politico, the Atlantic, and other outlets have started hosting similar events in search of new revenue streams. The business model has received criticism for eroding the traditional separation between editorial content and advertising.

The Viatris event was one of 64 corporate-sponsored conversations that Axios has hosted this year alone. The events have been sponsored by industry leaders like Facebook, Bank of America, and UnitedHealth and have featured 59 members of Congress and federal officials, according to a Washington Free Beacon review.

The arrangement is not illegal, but it blurs the ethical boundaries of journalism and highlights a sort of shadow lobbying strategy, according to ethics experts, who say the news outlet’s practice allows companies to circumvent lobbying-disclosure rules and wield influence through a side door.

In the case of the Axios events, the outlet’s reporters plug the corporate sponsor before leading a discussion with the policymaker that centers on an area of interest to the company. In a separate segment, an Axios employee conducts a friendly interview with one of the sponsor’s executives.

“There’s no way to defend Axios in this whole scenario,” said Scott Shepard, an analyst with the National Center for Public Policy Research, a watchdog group. The organization, he added, is “serving as a conduit both for corporations and for the lawmakers who[m] the corporations support.”

Axios states on its website that companies may sponsor public events and are permitted to provide feedback, though they cannot “veto speakers or request an invite be sent to government officials.”

Axios publisher Nick Johnston told the Free Beacon that he saw no issue with the advertising model, which he likened to television advertisements on news networks on which lawmakers are frequently interviewed. In that case, however, lawmakers are rarely, if ever, speaking directly to the particular companies’ advertising, nor are the network’s journalists deployed to help advance the message. Johnston said Axios‘s sponsors do not dictate event guests or content. An Axios spokeswoman declined to say how much sponsors pay to underwrite the events.

Many of the government officials who serve as panelists nonetheless serve on committees with jurisdiction over the corporate sponsors’ industries or work at federal agencies that shape policies of interest to the firms.

“There are a lot of things that happen in D.C. that don’t meet the statutory definition of lobbying, but it still has the same effect of peddling influence,” said Dylan Hedtler-Gaudette, the manager of government affairs at the Project on Government Oversight, a watchdog group that supports more transparency in government. “The appearance of impropriety is often just as bad as actual impropriety because it really skews the perception the public has about how the government works. Even if there isn’t anything nefarious going on here, it just looks bad.”

Facebook, for example, sponsored an event on July 15 with Rep. Chrissy Houlahan (D., Pa.) on the use of technology in education. Weeks before the forum, Houlahan cosigned a letter along with other Democratic moderates that called on House leaders to delay antitrust legislation targeting tech giants. The same moderate legislators, including Houlahan, have partnered with the Chamber of Progress, a special interest tech group funded by Facebook and other tech firms that has lobbied aggressively against the antitrust legislation. 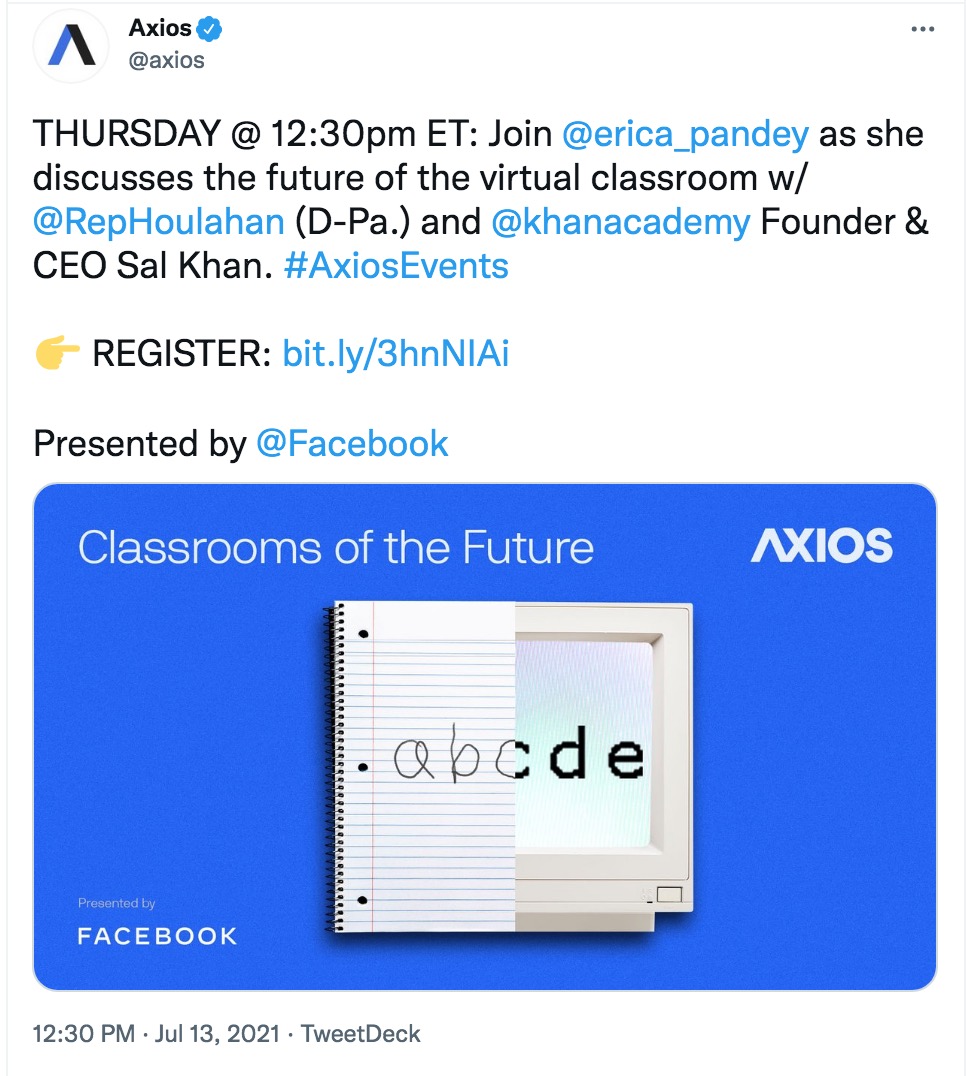 Another Facebook-sponsored event brought together a member of Congress and a trade group supported by the social media giant. Rep. Joyce Beatty (D., Ohio), the chairwoman of the influential Congressional Black Caucus, appeared at a forum on Sept. 14 alongside an executive for U.S. Black Chambers, a coalition of black business executives. Undisclosed during the event was the fact that U.S. Black Chambers receives funding from Facebook and Google. 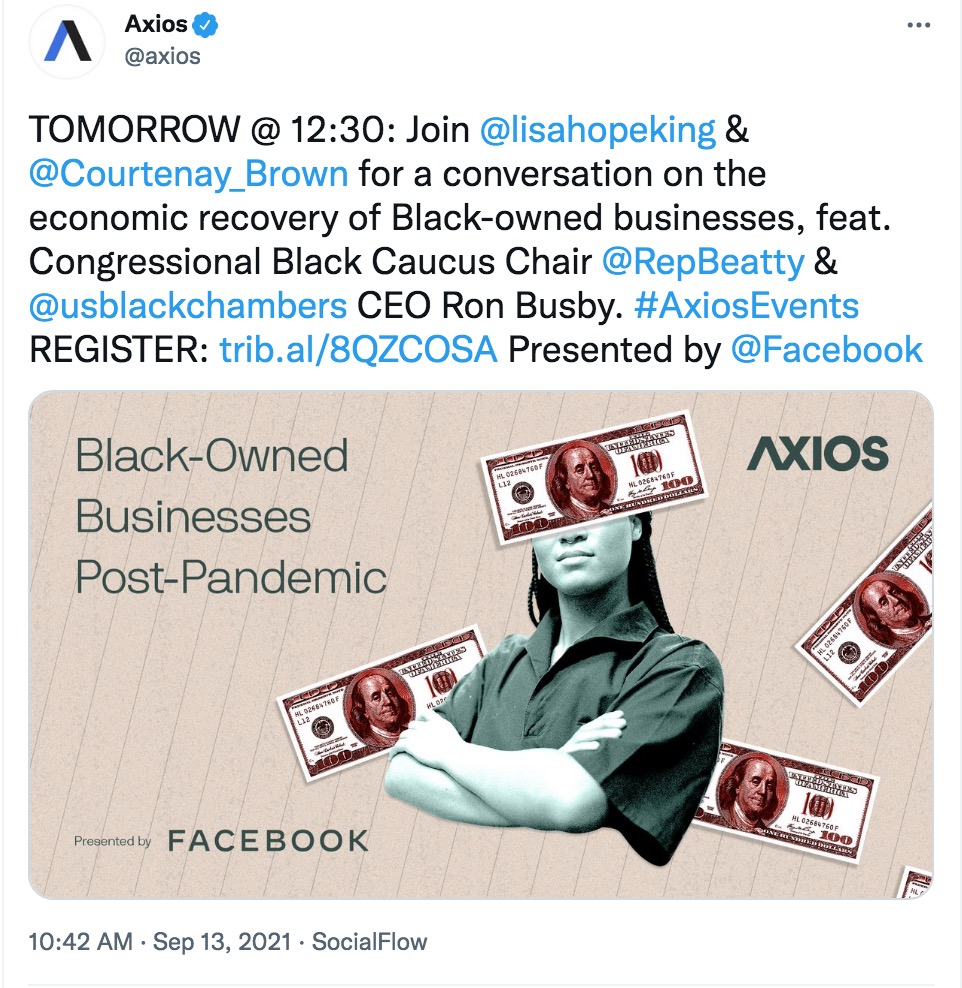 “Ordinary Americans don’t trust Congress, Big Tech, or the mainstream media individually. When they hunker down together, it’s even more disturbing, though it’s understandable that Facebook, for instance, scared of what Congress may do to punish it for past deeds, may be eager to pay to sponsor such events,” said Scott Walter, the president of Capital Research Center, a conservative watchdog group.

The Axios events have also facilitated public-relations blitzes for companies with business before the Biden administration.

The General Motors subsidiary Cruise, for example, which develops technology for autonomous vehicles, sponsored an Axios forum in late April with Secretary of Transportation Pete Buttigieg. Buttigieg would oversee any change to federal policy regarding self-driving cars and other alternative vehicles. General Motors has lobbied the Transportation Department and other agencies on autonomous vehicle technology, according to lobbying records. 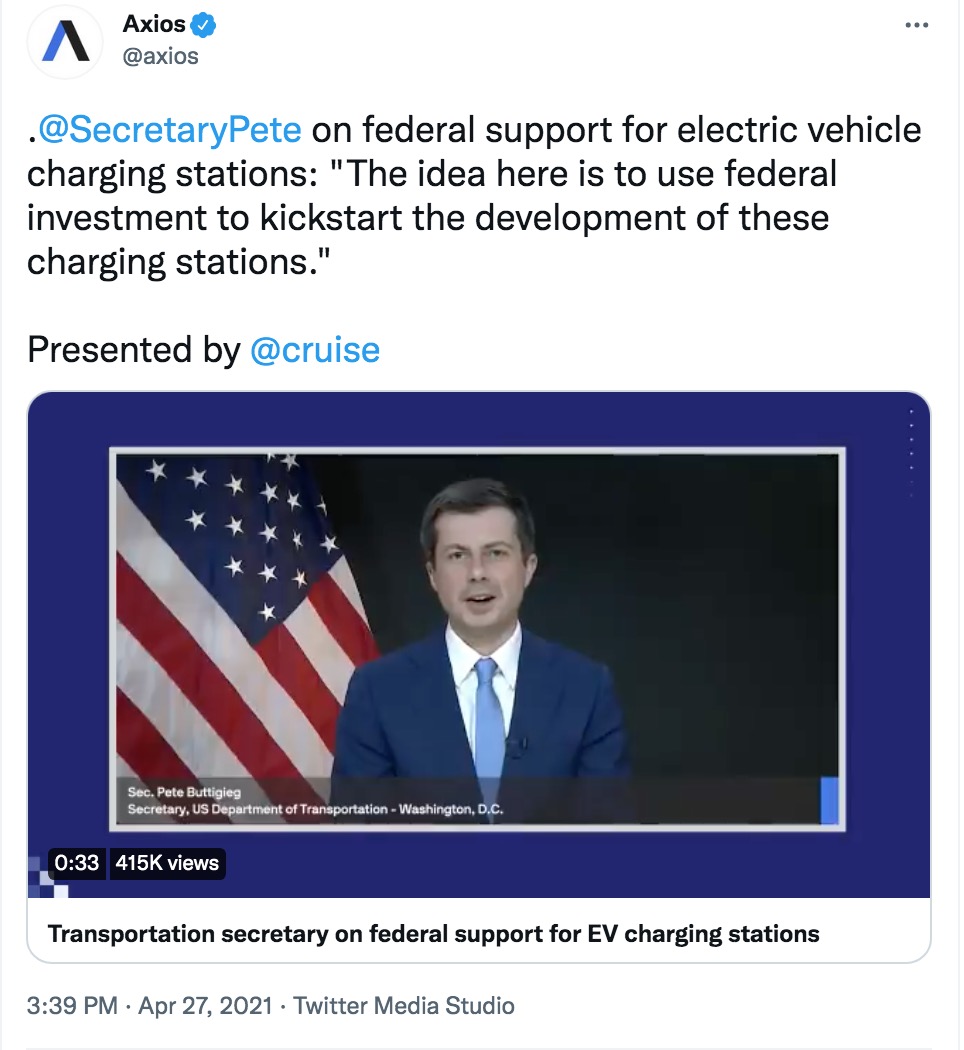 And Qualcomm, the communications giant, hosted an event in July with acting Federal Communications chairwoman Jessica Rosenworcel. Qualcomm lobbied the FCC last year and reportedly met with Rosenworcel’s aides this year to discuss licensing issues. Rosenworcel this month named a Qualcomm executive to the Communications Security, Reliability, and Interoperability Council, which advises the FCC on the nation’s communications policy.

Several lesser-known but politically active companies are also among Axios‘s corporate sponsors, including Viatris, the sponsor of the event with Rep. Schrader. During the event, Schrader, a member of the House Energy and Commerce subcommittee on health, touted a bill he introduced this year for Medicare funding for biosimilars. Viatris has spent $3.65 million on lobbying this year alone, including on federal funding for biosimilars. The company also gave $2,500 each to Schrader and his cosponsor for the bill, Rep. Adam Kinzinger (R., Ill.).

UnitedHealth sponsored an event on July 1 for Chiquita Brooks-LaSure, the administrator of the Centers for Medicare and Medicaid Services. The health care company spends millions of dollars each quarter to lobby CMS and other government agencies. 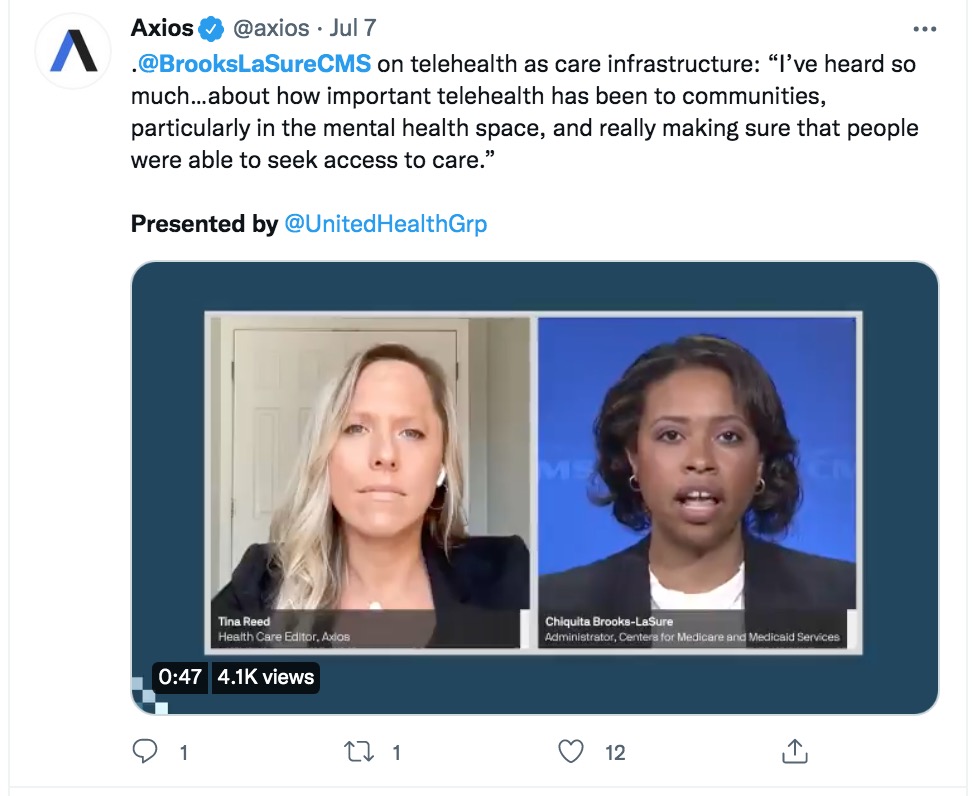 While most of the interviews with policymakers focus on the sponsors’ core business, some of the segments focus on social initiatives promoted by the company.

Bank of America in June sponsored separate events with Rep. Sheila Jackson Lee (D., Texas) and Rep. Ritchie Torres (D., N.Y.) to promote the company’s diversity programs. Jackson Lee, who discussed the “Juneteenth” holiday, is on the board of the Congressional Black Caucus Foundation, a private foundation affiliated with the congressional caucus that receives funding from Bank of America. Torres, who was interviewed about the Latino LGBT community, serves on the House Committee on Financial Services. Bank of America has strived in recent years to regain the trust of minority customers after it paid the Justice Department $335 million in 2011 to settle allegations that it discriminated against black and Latino borrowers.

Most of the companies and policymakers did not respond to requests for comment. A spokeswoman for Qualcomm said the company had no role in deciding which policymaker Axios invited to speak at its event. A spokeswoman for Cruise said the event allowed the company to discuss the benefits of autonomous vehicles in a separate segment. A spokesperson for the Department of Transportation said Axios requested an interview with Buttigieg to discuss transportation issues and administration priorities. The spokesperson noted that Buttigieg’s segment did not involve a discussion about Cruise.