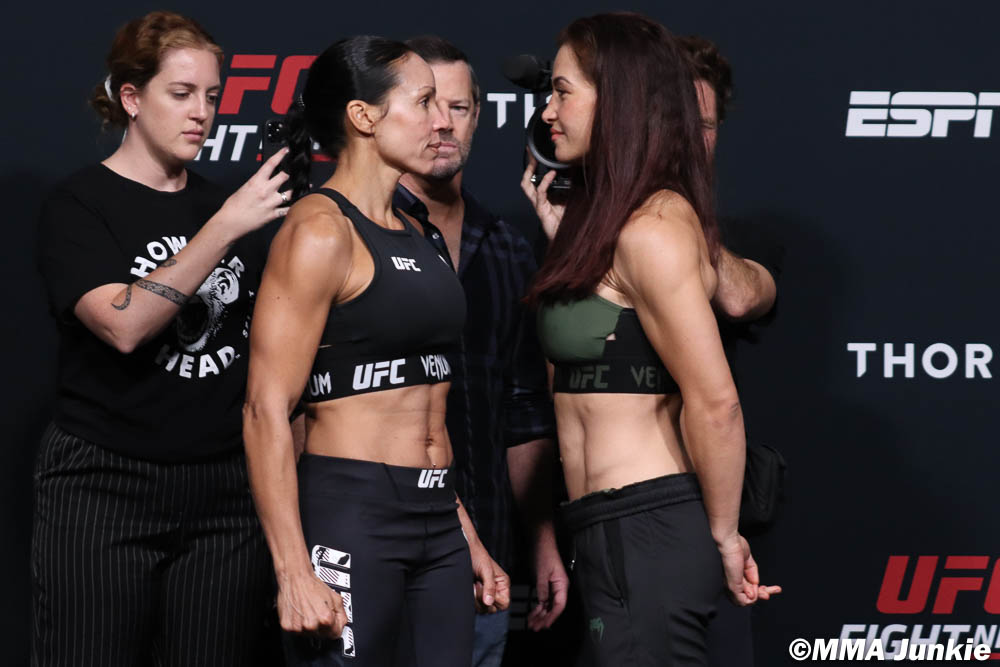 Miesha Tate’s return to MMA from a nearly five-year retirement was a success on Saturday when she beat Marion Reneau in the UFC on ESPN 26 co-main event.

Former UFC champ Tate (19-7 MMA, 6-4 UFC) got back in the octagon for the first time since November 2016 and managed to pull off a third-round TKO victory over Reneau (9-8-1 MMA, 5-7-1 UFC) in the women’s bantamweight matchup, which took place at the UFC Apex in Las Vegas.

Check below for the top Twitter reactions to Tate’s victory over Reneau at UFC on ESPN 26.

Retirement fight, husband and son in her corner, fighting Meisha Tate in her come back. No pressure… #UFCVegas31

Tate looked pretty solid in the first 5 minutes of her return. #UFCVegas31

10-9 Miesha, who is looking very sharp and on-point in her first round in nearly five years.

Maybe it’s just been a while but I don’t recall Tate ever looking this shredded, right? Good on her.

10-9 Tate after 1 in the rare comeback/retirement fight.

I wonder if ronda is watching

Reneau with the blatant fence grab because your retirement fight should have some “savvy veteran” moments.

Tate finishing that takedown saved the ref from missing a very obvious point taking cage grab. That was not a warning situation. That was a point 2-0 Tate

Miesha Tate is not looking like someone who hasn’t fought in five years, that’s for sure. #UFCVegas31

Tate with the ground-and-pound and referee Mark Smith stops it! Tate wins for the first time in five years!

Respect to the UFC for giving Marion Reneau a platform to speak in her retirement moment.

Goes out tied for the most fights in UFC women’s bantamweight history with 13. #UFCVegas31

Miesha is not ranked due to her retirement while Marion was ranked #12. The UFC has the higher ranked fighter fighting out of the red corner. https://t.co/ntgeNnjsyi

Get the day’s top stories

Thanks for signing up.
Please check your email for a confirmation.