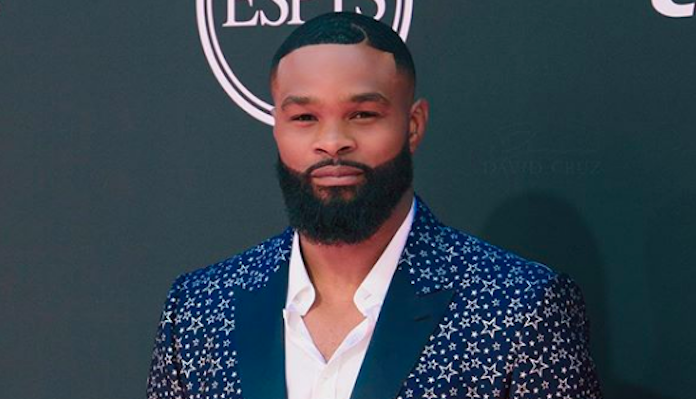 Tyron Woodley is excited for his new boxing career, saying that “this is your first and everybody else’s first chance to watch me box.”

Woodley is the former UFC welterweight champion but he was let go by the world’s leading MMA promotion following a fourth straight loss to Vicente Luque earlier this year. Instead of trying to re-up with the UFC on a new contract, Woodley instead became a free agent and he decided to take his talents to the boxing ring, as he will take on YouTuber-turned-boxer Jake Paul on August 29 in what will be Woodley’s first professional boxing match.

Speaking to reporters at the press conference ahead of the Woodley vs. Paul boxing match, “The Chosen One” himself confirmed that this fight against “The Problem Child” isn’t a one-off and that Woodley plans on continuing to compete in the sport of boxing after it’s over.

“This is an opportunity for me to sprint into the boxing lane. But also, I’m preparing accordingly. I’m preparing if I was fighting Canelo Alvarez. I’m training like that right now,” Woodley said (via ESPN).

“I’m gonna be fighting real boxers and they’re going to have a problem to deal with and it’s going to be me,” Woodley said. “At the end of the day, I’m in boxing right now. He’s my first opponent. This is your first and everybody else’s first chance to watch me box.”

It will be interesting to see how Woodley fares against Paul later this summer. With a big win, Woodley could certainly parlay that into more big paydays in the world of boxing. But a catastrophic loss and it could spell disaster for him.

Are you excited to watch Tyron Woodley compete in the boxing ring and do you think he has what it takes to make a run for the belt in another sport?