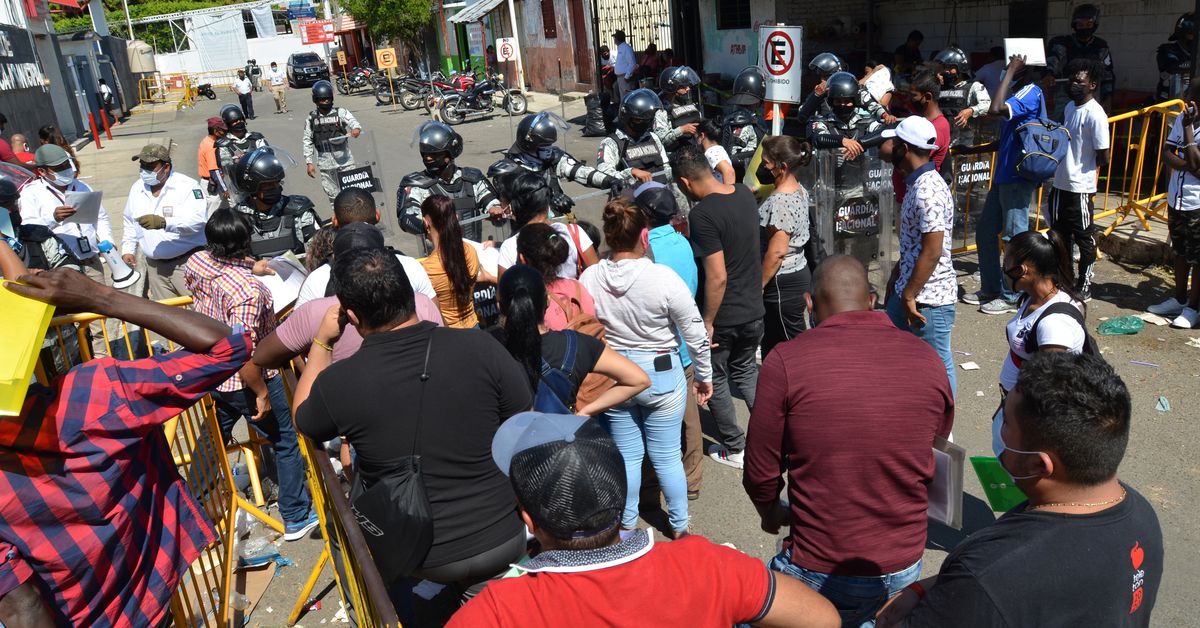 Police officers stand guard next to migrants from diverse nations who had already succeeded in crossing the border as they wait outside of a National Institute of Migration (INM) office for the officials to provide them with humanitarian visas to let them cross, at the Mexican border town of Tapachula, Mexico January 11, 2021. REUTERS/Jose Torres

(Reuters) – A federal appeals court on Monday revived claims that U.S. Citizenship and Immigration Services has unreasonably delayed in placing four applicants for U visas on a waiting list and attaining deferred-action status that would protect them from deportation.

A unanimous three-judge panel of the 6th U.S. Circuit Court of Appeals rejected USCIS’ argument that its delays in the four consolidated cases were due to a backlog of roughly 160,000 applications for U visas, which are granted to victims of serious crimes, and were in line with the current five-year average waiting period.

“We find it unhelpful to fixate on the average snail’s pace when comparing snails against snails in a snails’ race,” Circuit Judge Karen Nelson Moore wrote.

The court, however, said it lacked jurisdiction over the plaintiffs’ separate claim that USCIS failed to timely issue them work authorization permits once they applied for U visas. Since USCIS issues the permits to applicants at its discretion and is not required to do so, courts cannot force the agency to issue them more quickly, the panel said.

Bradley Banias of Wasden Banias, who represents the four petitioners, did not immediately respond to a request for comment. Nor did USCIS.

Banias also represents five U-visa applicants whose similar claims against USCIS were revived by the 4th Circuit in January.

The Immigration and Nationality Act permits USCIS to issue up to 10,000 U visas each year. Once that cap is reached, applicants are placed on a waiting list and become eligible for work permits and deferred action, meaning they cannot be deported.

USCIS also can issue work permits to visa applicants who have not yet been placed on the waiting list, but is not required to do so.

The four plaintiffs applied for U visas between 2016 and 2018, but USCIS has yet to adjudicate their visa petitions or applications for work permits, according to court filings.

They sued the agency in federal courts in Michigan and Kentucky last year, claiming its failure to place them on a waiting list or process their applications for work authorization amounted to an unreasonable delay, and violated the INA.

U.S. Magistrate Judge Phillip Green in Grand Rapids, Michigan last year said he lacked jurisdiction over the three cases before him because placing individuals on the waiting list was ultimately a matter of USCIS’ discretion and was shielded from court review.

In January, U.S. District Judge Karen Caldwell in London, Kentucky disagreed and found she could hear the fourth case. But she ultimately sided with USCIS, ruling that the plaintiffs could not show the delays in their cases were out of the ordinary or unreasonable.

The 6th Circuit on Monday reversed both judges. The initial placement of U-visa applicants on the waiting list is mandatory under DHS regulations, so courts are not barred from reviewing whether USCIS met its obligation to do so, the panel said.

The court also rejected the “radical rule” proposed by the government that agency delays are justifiable as long as they occur across the board.

“Waiting a century to hear back about your U-visa application, for example, is patently unreasonable,” Moore wrote.

Moore said that on remand, the plaintiffs should be given a chance to amend their complaints to address a June memo from USCIS creating guidelines for placing U-visa applicants on the waiting list and issuing them work permits.

The case is Barrios Garcia v. Department of Homeland Security, No. 21-1037.

For the petitioners: Bradley Banias of Wasden Banias

For DHS: Elizabeth Veit and T. Monique Peoples of the U.S. Department of Justice

Dan Wiessner (@danwiessner) reports on labor and employment and immigration law, including litigation and policy making. He can be reached at daniel.wiessner@thomsonreuters.com.