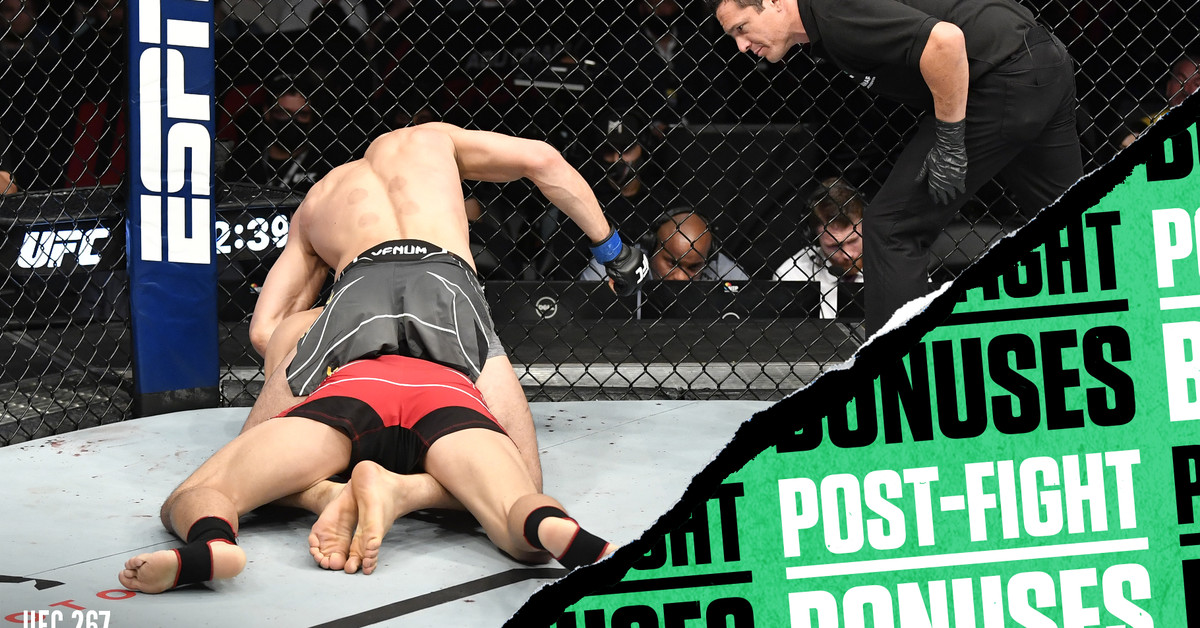 The Etihad Arena in Abu Dhabi, United Arab Emirates was home to a great day of fights at UFC 267: Blachowicz vs. Teixeira. The card saw two (T)KOs, four submissions and eight decisions, including one split-decision.

Fight of the Night: Yan vs. Sandhagen

The prelims started with Tagir Ulanbekov defeating Allan Nascimento via split decision in a fast-paced grapple-fest that saw plenty of action and both men threaten with submissions. That was followed by Hu Yaozong demonstrating how tough he can be, but ultimately, he broke under the pressure of Andre Petroski’s superior grappling, succumbing to an arm triangle in round three. Outstanding fight! Next we saw Makwan Amirkhani dive for a takedown in the second round, only to eat a knee and get a one-way ticket to the underworld. Lerone Murphy followed him down and sealed his fate with a couple more coffin nails and remains undefeated. Mr. Finland is now on a three-fight skid. Michal Oleksiejczuk and Shamil Gamzatov put on one helluva three-and-a-half minutes, swangin’ and bangin’, but Gamzatov ended up completely winded from repeated body shots and was ripe for the finish, which Oleksiejczuk got with an emphatic uppercut.

Elizeu Zaleski and Benoit St. Denis was a one-sided battle that should have been stopped, at the very least, by mid round two. I would have been perfectly fine with a stoppage in round one, but the ref clearly hated St. Denis and decided to let him take ungodly amounts of damage. In the end, even with a point deduction for a low-blow (despite ignoring numerous eyepokes from Capoeira), Zaleski swept the cards with a 29-26 unanimous nod. Gross reffing, to say the least. Albert Duraev and Roman Kopylov put on a slobberknocker of epic proportions that saw both men take an absolute beating, but ultimately, Duraev would take the unanimous decision, likely due to a super dominant second round. Certified banger! Zubaira Tukhugov and Davi Ramos put on a fantastic scrap that saw both men have exceptional moments. The unanimous nod would go to Tukhuogv, but both men should walk away with their heads held high. In the final fight on the undercard, Amanda Ribas and Virna Jadiroba put on a great fight with Jandiroba taking the first clearly, Ribas taking the second, and the third also going to Ribas who took the unanimous decision. Great recovery from being rocked pretty hard in the first.

Shamil Gamzatov defeated Michal Oleksiejczuk via TKO (strikes), 3:31 of round 1

Lerone Murphy defeated Makwan Amirkhani via KO (knee and punches), :14 of round 2

The main card opened with Magomed Ankalaev securing a unanimous decision victory over Volkan Oezdemir in a fight that began with Volkan coming out hot in round one, then saw Ankalaev take over for the rest of the fight with a dominant performance. Khamzat Chimaev proved the hype behind him is real by snagging a quick and savage rear-naked choke on Li Jingliang, but the Leech fought it off. It was the second savage RNC that Khamzat sunk that put him to sleep without even the hint of a lullaby. Then we had a snoozer from Alexander Volkov and Marcin Tybura that saw Volkov take a very lackluster decision. Islam Makhachev sizzled when he got Hooker down and put a nasty kimura on that the Hangman had no hope of escaping, forcing the New Zealander to tap (verbally) just two-and-a-half minutes in.

Islam Makachev defeated Dan Hooker via submission (kimura), 2:25 of round 1

The co-main event saw a great back-and-forth battle. Sandhagen took the first (by my scoring), then Yan came on strong in the second. Round three was a tactical one, with Yan landing a few big shots and Cory landing potshots from range. Towards the end of the round, Petr landed a huge spinning backfist followed by a left hook, dropping Sandhagen and changing the momentum significantly in his direction. Round four was just Yan ripping brutal body shots and Sandhagen eating them. Yan is running away with this fight. Sandhagen had moments in round five, but Yan still took the round (again, by my scoring) with much more punishing shots. In the end, the judges saw it as I did, 49-46 for Petr Yan. Outstanding fight!

The main event began with Glover grabbing an early takedown on Blachowicz while he was still dry. He worked that nasty top game for the majority of the stanza, even using the can-opener, with Jan reduced to just keeping a tight closed guard. Round two saw both men open up and unleash big shots. Jan ended up on the ground, Glover passed to full guard then moved to the back. He immediately flattened out the champ, snaked an arm under his neck and before you could blink, he’d secured the choke and the tap. Glover is now the champ! HUZZAH!

Glover Teixeira defeated Jan Blachowicz via rear-naked choke at 3:02 of round two