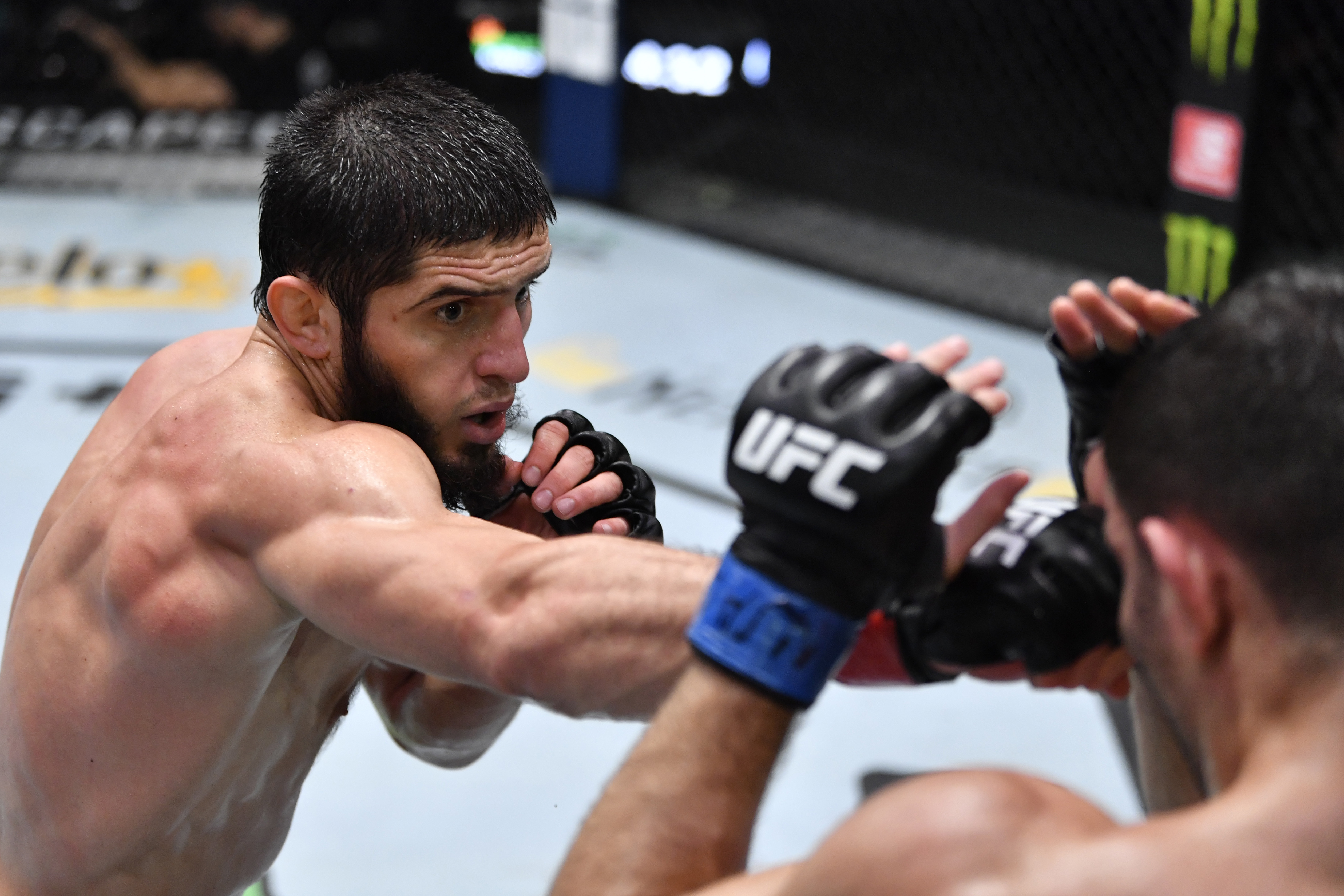 Islam Makhachev made an emphatic statement in his first UFC main event.

In a bout that was expected to involve a fair share of grappling, Makhachev (20-1 MMA, 9-1 UFC) shined in the clinch before securing a finish in the fourth round against a very tough Thiago Moises.

The lightweight bout was the UFC on ESPN 26 main event at the UFC Apex in Las Vegas. It aired on ESPN and streamed on ESPN+.

Makhachev looked to keep the pressure on Moises (15-5, MMA, 4-3 UFC) by controlling the center of the cage. After a feeling-out process that included a few quick exchanges of single kicks and two-punch combinations, the fight quickly progressed to the clinch.

With just over a minute remaining, Makhachev got the fight to the canvas after a takedown and began looking to land ground and pound strikes from guard until the round ended.

Moises began the second round looking sharp with quick strikes, but Makhachev didn’t allow for significant offense to mount before initiating a clinch, where the Russian continued to improve his position while landing a few punches from Moises’ back for the remainder of the round.

The fight continued in close quarters in the third round, as the pair continued to jockey for position against the cage. With a minute remaining, Makhachev secured another takedown. Moises was quick to shift position though and latched on to Makhachev’s ankle for a submission attempt, but nothing would come of it before time expired.

Moises turned up the pressure early in the fourth round, perhaps sensing he was down on the scorecards. Makhachev halted his progress by picking him up and dumping him for a big takedown. After working to take his opponent’s back, Makhachev locked in a rear-naked choke to force the tap midway through the round.

🇷🇺 @MakhachevMMA sinks in the RNC to close the show! #UFCVegas31 pic.twitter.com/LN4z3LnmS6

Becoming the first man to finish Moises, Makhachev extends his win streak to eight in the always-tough lightweight division.

Vowing to only compete in five-round fights going forward, Makhachev’s performance tonight keeps that promise alive as he forges a path towards the title once held by the man in his corner, Khabib Nurmagomedov.

“Hey guys, you can run, but you can’t hide,” Makhachev said in a warning to the rest of the division during his post-fight interview with Paul Felder. “I’m coming, I’m here.”

On the other end, Moises’ impressive three-fight win streak came to an end. It’s back to the drawing board for the 26-year-old Dana White Contender Series veteran who came up short on the biggest stage of his career thus far.

Full results of UFC on ESPN 26 include: