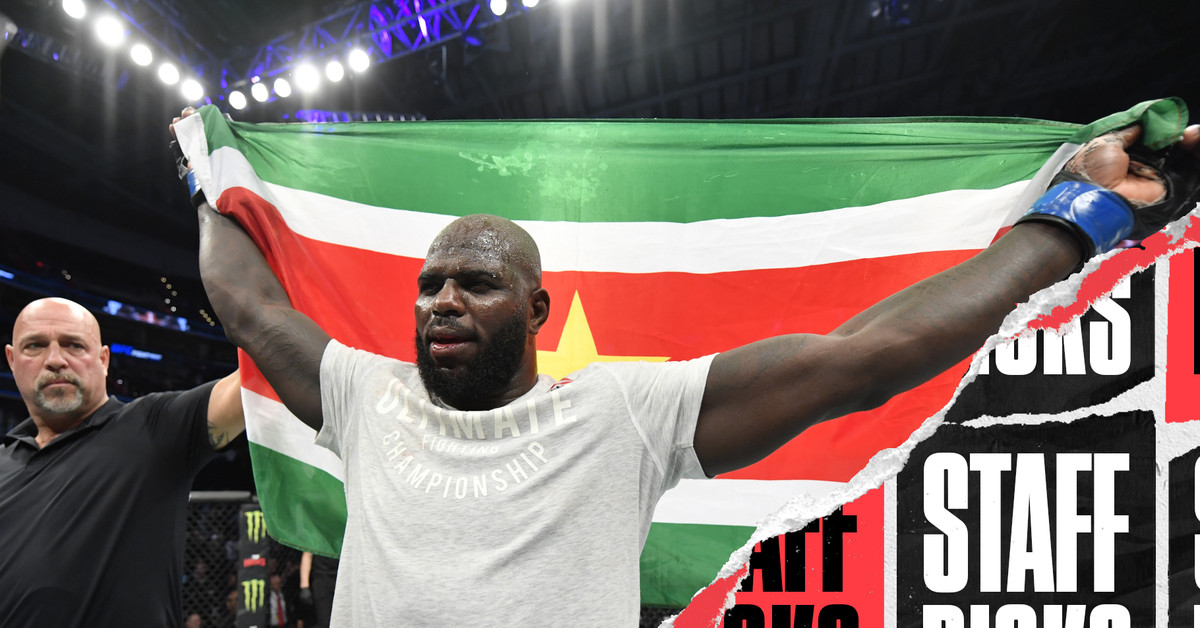 The Bloody Elbow team has made its predictions for UFC VEGAS 28, and we’re in agreement that Jairzinho Rozenstruik will defeat Augusto Sakai in the main event. As for the co-main, we’re split on who will prevail between Walt Harris and the surging Marcin Tybura.

Note: Predictions are entered throughout the week and collected the day before the event. Explanations behind each pick are not required and some writers opt not to do so for their own reasons. For example, if Phil Mackenzie entered all of his predictions on Wednesday without adding in any explanations, he has no idea if he’s going to be the only one siding with one fighter for any given fight.

Mookie Alexander: This fight could be extraordinarily bad and even if it isn’t there really doesn’t seem to be a super viable path to victory for Sakai. I don’t think he hits hard enough to put Rozenstruik away and if he gets into bigger exchanges he’s way more likely to get knocked out. I’m just hoping we see way more action than Rozenstruik’s last main event. Jairzinho Rozenstruik by TKO, round 2.

Zane Simon: Fighting Rozenstruik on the feet is an exercise in constant care and patience. Stay away from him, keep your tools long, and minimize pocket exchanges, and he often won’t create enough of his own offense to win rounds. Get frustrated, bull into him, and try to trade blows and (unless you’re Francis Ngannou) that tends to be a path to disaster. Unfortunately, when Sakai hasn’t been able to lure opponents into chasing him, he’s tended to be the one to get aggressive and flurry forward. That seems like a recipe for disaster. Jairzinho Rozenstruik via TKO, round 3.

Mookie Alexander: This is a chancy pick. Tybura may have heroically handed Greg Hardy an L but he also took quite a bit of damage before Hardy gassed out. I feel like Harris can more or less lose the exact same way and in fact he basically lost the Overeem fight in a slightly more extreme version of Hardy vs. Tybura. If Harris starts fast then I think he’ll get the knockout. But if he starts fast and then just fades out then Tybura is going to grind him out and stop him late or win a decision. Again, it’s a chancy pick. Walt Harris by TKO, round 1.

Zane Simon: Definitely feels like a two true outcome fight. Harris tends to fade as fights go on, Tybura doesn’t. Harris throws with murderous intent standing, Tybura is very hittable. Tybura has clear paths to victory when he’s the better wrestler, and Harris has problems over-extending himself and getting off balance when throwing in longer combos. Will Harris pick up the thrilling first round KO? Or will he get subbed in the second or third? I’ll take Harris to look sharp enough early to get the job done. But, the longer this fight goes, the better chance Tybura finds a way to mount the comeback. Walt Harris by KO, round 1.

Zane Simon: Dolidze definitely has the size and power to make this fight very rough on Staropoli. But I’m not convinced he has the output. At least to date, the Argentinian has been pretty impossible to put away. And he throws a lot, lot more volume standing. If Dolidze were a cleaner striker or more technical wrestler, I might have more faith in his chances of riding out a win with a few big shots and/or lots of control time. But, if I’m figuring on Staropoli to see the final bell, then I think he’ll probably have done enough work to win along the way. Laureano Staropoli by decision.

Zane Simon: Oh no. Everyone picking Ponzinibbio here has me feeling just that much more unsure about my own decision to ride with him. In a vacuum, Baeza’s lackluster defense on the back foot, and fairly predictable strike selection, should make him an ideal target for Ponzinibbio’s patient pressure boxing game. So, if I’m not banking on him to be just totally shot, it’s hard for me to overlook that as a clear path to victory. But, it’s also hard to ignore that the general vibe in the room is that Baeza is the good, powerful athlete on the rise, and Ponzinibbio is the old lion trying to defend what remains of his pride. I’ll pick Santiago Ponzinibbio via TKO, round 2. But, more than ever that feels like a mistake.

Zane Simon: I’ve never been that sold on Todorovic’s busy, speed-based boxing and wrestling game. It has the feel of a fighter too used to just physically flying by lackluster opponents in a way that UFC competition just won’t let him. That said, Rodrigues’ total lack of head movement and love of sitting in the pocket to trade power hook combos should make this a wild ride for as long as it lasts. Will Rodriguez put Todorovic to sleep before he gets slept? I like the snap on his punches just a bit more, so I’ll side with Gregory Rodrigues via KO, round 1. But the reality is probably just that one of these two men is going to sleep and it may be luck of the draw that decides who.

Zane Simon: Given Arroyo’s struggles to maintain range and/or defend takedowns, Breese really should win this. He’s probably the more technical fighter in every aspect. And Arroyo’s cardio problems should only enhance that edge as the fight goes on. But, Arroyo also clearly throws with a ton of power, and Breese has let himself get rattled when things aren’t going his way. So I’ll take Tom Breese by TKO, round 2. But, there might be a couple exciting momentum swings on the way.