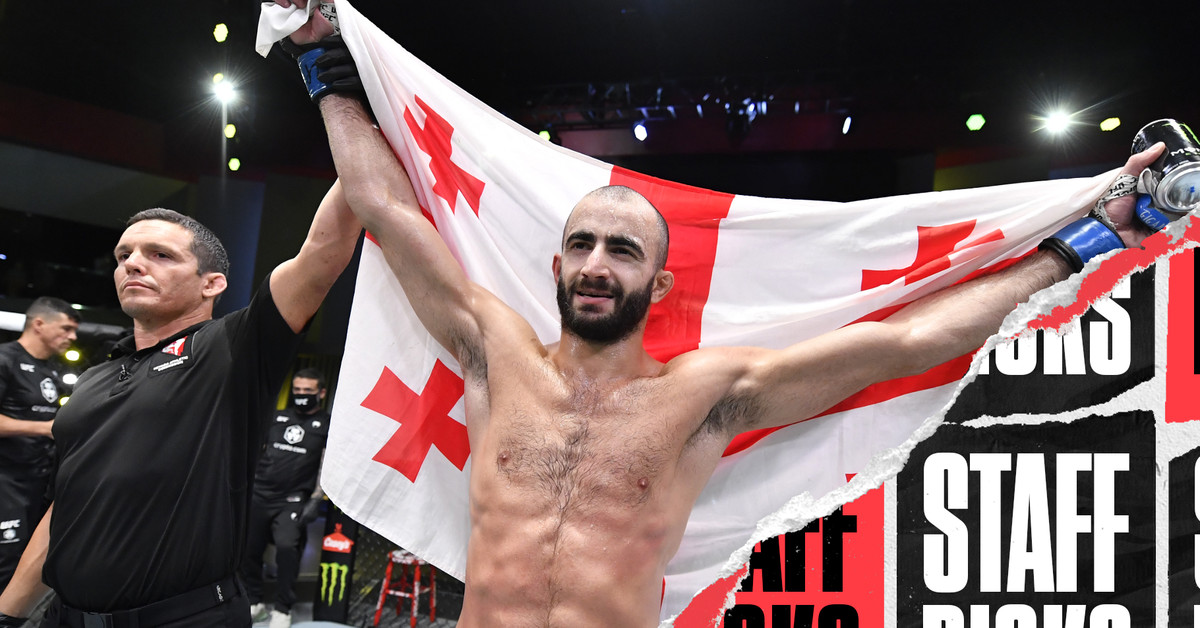 The Bloody Elbow team has made its predictions for UFC Vegas 46, and only Victor Rodriguez is going with Calvin Kattar over Giga Chikadze in Saturday’s main event. In the co-main event, we’re leaning towards Jake Collier over Chase Sherman in what I assume the UFC hopes is a slobberknocker of a heavyweight fight. Our only main card unanimous pick is Katlyn Chookagian to once again defeat Jennifer Maia. To see the latest betting lines for these fights, head over to DraftKings SportsBook.

Note: Predictions are entered throughout the week and collected the day before the event. Explanations behind each pick are not required and some writers opt not to do so for their own reasons. For example, if Phil Mackenzie entered all of his predictions on Wednesday without adding in any explanations, he has no idea if he’s going to be the only one siding with one fighter for any given fight.

Mookie Alexander: How much did the Holloway fight take out of Kattar? I’m not even joking, because that was an extraordinary level of punishment and head trauma he suffered and for his own good it was best to sit out the rest of 2021. Kattar is a talented striker and I love his body work and ability to change things up, but Chikadze should have the advantage. His speed and powerful kicking game can pose serious problems for Kattar. One thing I believe Kattar’s team has likely noted is that Giga was much less effective on the backfoot vs. Barboza as opposed to when he pressured Edson, who’s never been that difficult to get uncomfortable. I’ve been burned by being a Chikadze skeptic over the past couple of fights so I better shut up and pick him now. Giga Chikadze by unanimous decision.

Zane Simon: The feeling that there’s sort of a gut level read on who should win this fight doesn’t really change the fact that it’s not a bout that should inspire too much confidence in either direction. On the surface, Chikadze is on a hell of a run, and Kattar has struggled with fighters that can consistently work a backfoot kicking game against him. If Kattar isn’t going to bring a lot more layers to the table, like a more dedicated wrestling game, or a more persistent jab, or even his own higher output kicking game, it’s hard not to slide toward a Chikadze pick. That said, Kattar has never been KO’d in his whole career, he throws a lot more than Chikadze minute-to-minute, and Chikadze takes some big risks when he decides to push forward, and has faded late in the past. If Chikadze can’t crush Kattar early, the chances of a late charge from the ‘Boston Finisher’ feel high. Still, I can’t see the way Kattar struggled with Moicano and Zabit in the past, or the way that Chikadze hung with Barboza and come to any other conclusions. Giga Chikadze by decision.

Mookie Alexander: Sherman really looked bad in his last fight and he’s already not the most brilliant defensive fighter you’ll ever see. I just have no idea why this is the co-main event. Actually I know why… heavyweights. Jake Collier by TKO, round 2.

Zane Simon: After the way Sherman looked in his last fight, there’s not a heavyweight in the UFC I’d pick him to beat right now. He looked dangerously unfocused in the cage. Collier may be a bit fluffy up at 265, but he still fights like the same wildman he was at light heavyweight. Jake Collier by decision.

Mookie Alexander: Who wanted to see this fight again? There’s hardly anything to suggest a different outcome. Katlyn Chookagian by unanimous decision.

Zane Simon: We saw this fight a couple years ago, and Maia just didn’t have the output to win it. Both women have sharpened up their boxing a bit in the time since, but I’m not at all convinced the basic dynamic has changed, which is just that if neither one has KO power, Chookagian throws more and with more variety. Katlyn Chookagian by decision.

Mookie Alexander: This fight rules. Royval is reckless to a fault and it can create some awesome wins and also some terrible spots that he can’t get out of. Bontorin has shown some potent striking and he’s a great grappler, but he does have a button on him and Kai Kara-France shut it off in spectacular fashion. I get the sense that this is one Royval can win early but Bontorin would otherwise win late. Rogerio Bontorin by submission, round 3.

Zane Simon: I can honestly see Royval being the fighter between the two more capable of making a title run, just because he’s also the fighter more capable of surprising opponents in the cage. But, he’s also just a lot, lot messier and those early wins of his have now been met by two hard losses where more structured, technical opponents just took advantage of all the bad positions he throws himself into. At some point, early in this fight, I think Bontorin is probably going to be in a world of trouble. Maybe he gets hurt, maybe he gets put in a terrible grappling position briefly and nearly gets subbed, but the longer this fight goes, the more I’m willing to bank on his patience, power, and control to see it through. Rogerio Bontorin by decision.

Zane Simon: Without knowing anything about him, I like Borshchev a lot. I like his goofy nickname, I like the speed and clean delivery he has on his punches, and I like the fact that he looks like he just climbed off a fishing boat to take fights in the UFC. That said, I’m not convinced that he’s really prepared to fight at this level yet. Bush may be pretty green too, but he has the basics of a complete, functional MMA game. He throws a lot of kicks standing, hits some takedowns when he needs them, and has a nice back-take submission game. Borshchev’s wrestling defense looks amazingly raw, as does his kicking defense. Really most of his game outside of punching in the pocket just seems under-developed. Just feels like too many chances for Bush to dive in, get the fight to the mat, and find Borschev’s back in the scramble. Dakota Bush via submission, round 2.

Zane Simon: Brito looks so tense in the cage. Whether he’s swinging wild hooks in the pocket, or locked down in top control trying to land shots. He just carries an air of adrenaline fueled aggression. And against an impossible to KO vet like Algeo, I kinda feel like that just means he’s gonna gas out. Brito will probably start out landing a couple big shots and a couple big takedowns, but if this fight gets to the third round, I’m not sure he’ll have anything left. Bill Algeo via TKO, round 3.

Dude rushes cage, attempts flying stomp to break up man vs. woman fight in Russia
‘The worst thing is you have to do it multiple times’