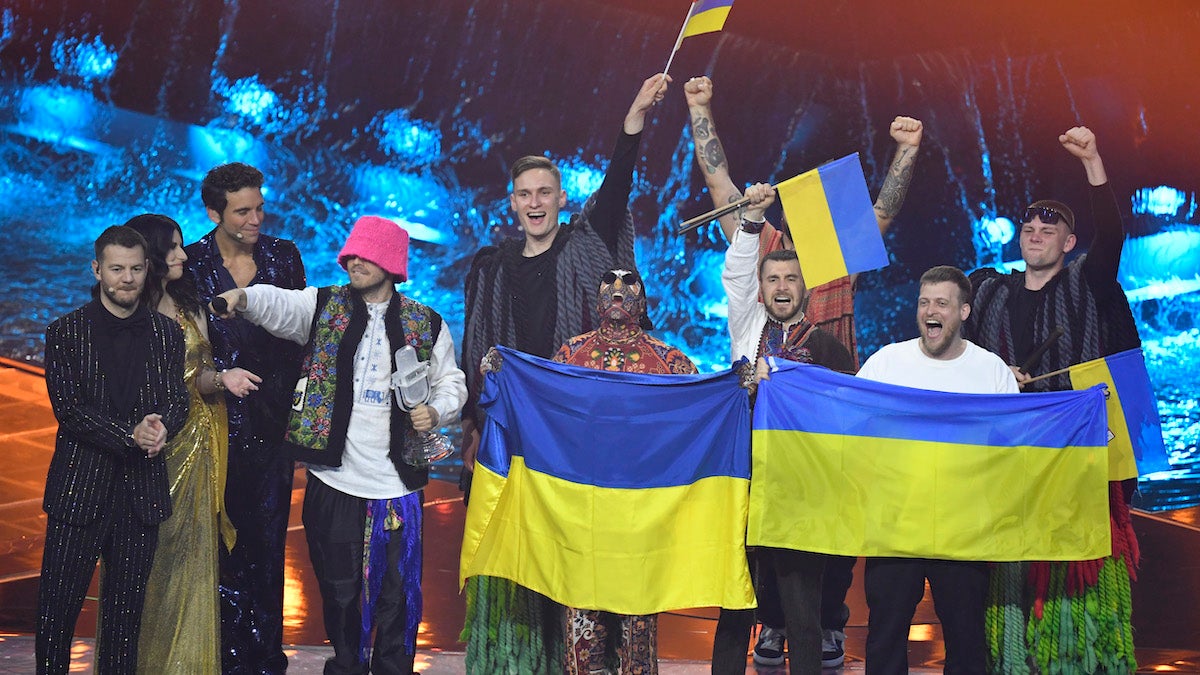 Ukraine’s Kalush Orchestra triumphed with their song “Stefania” at the 66th Eurovision Song Contest finale on May 14, 2022 in Turin, Italy. The lead singer, Oleg Psiuk, wrote the song for his mother, and it has become an unofficial anthem of the war-torn country, for lyrics like, “I’ll always find my way home, even if all roads are destroyed.”

Ukrainian President Volodymyr Zelenskyy said in a post on the Telegram messaging app, “we will do our best” to host next year’s contest in “Ukrainian Mariupol,” with hopes that it will be “free, peaceful, rebuilt!” in a year’s time.

“Thank you for the victory, Kalush Orchestra and everyone who voted for us!,″ Zelenskyy wrote, “I am sure our victorious chord in the battle with the enemy is not far off.”

Psiuk, known for his signature pink bucket hat, used his time on stage to say, “Help Azovstal, right now,″ in reference to the Ukrainian fighters trapped beneath the Azovstal iron and steelworks plant by Russians. The battalion, which is among the plant’s last 1,000 defenders according to the Associated Press, were able to send their appreciation via Telegram: “Thank you to Kalush Orchestra for your support! Glory to Ukraine!”

The band were not able to travel together or even rehearse before performing the song at the semi-finals on May 10, they shared. They hoped next year, to be standing “on the stage of any city [in the independent] Ukraine.”

AP reports that all-male band received special permission to leave the country to represent Ukraine at the music contest, but that one member stayed behind to keep fighting. The rest are expected to return now that the contest is over.

The event was hosted in Italy, home of last year’s winners, Maneskin.

Ukrainian commentator Timur Miroshnichenko, who does the live voiceover for Ukraine’s broadcast of the competition, broadcast from an undisclosed location after the TV tower in Kiev was badly damaged in an airstrike. Miroshnichenko thanked “the Armed Forces of Ukraine and the resistance of our people,” for allowing Kalush Orchestra to make it to Italy for the contest.