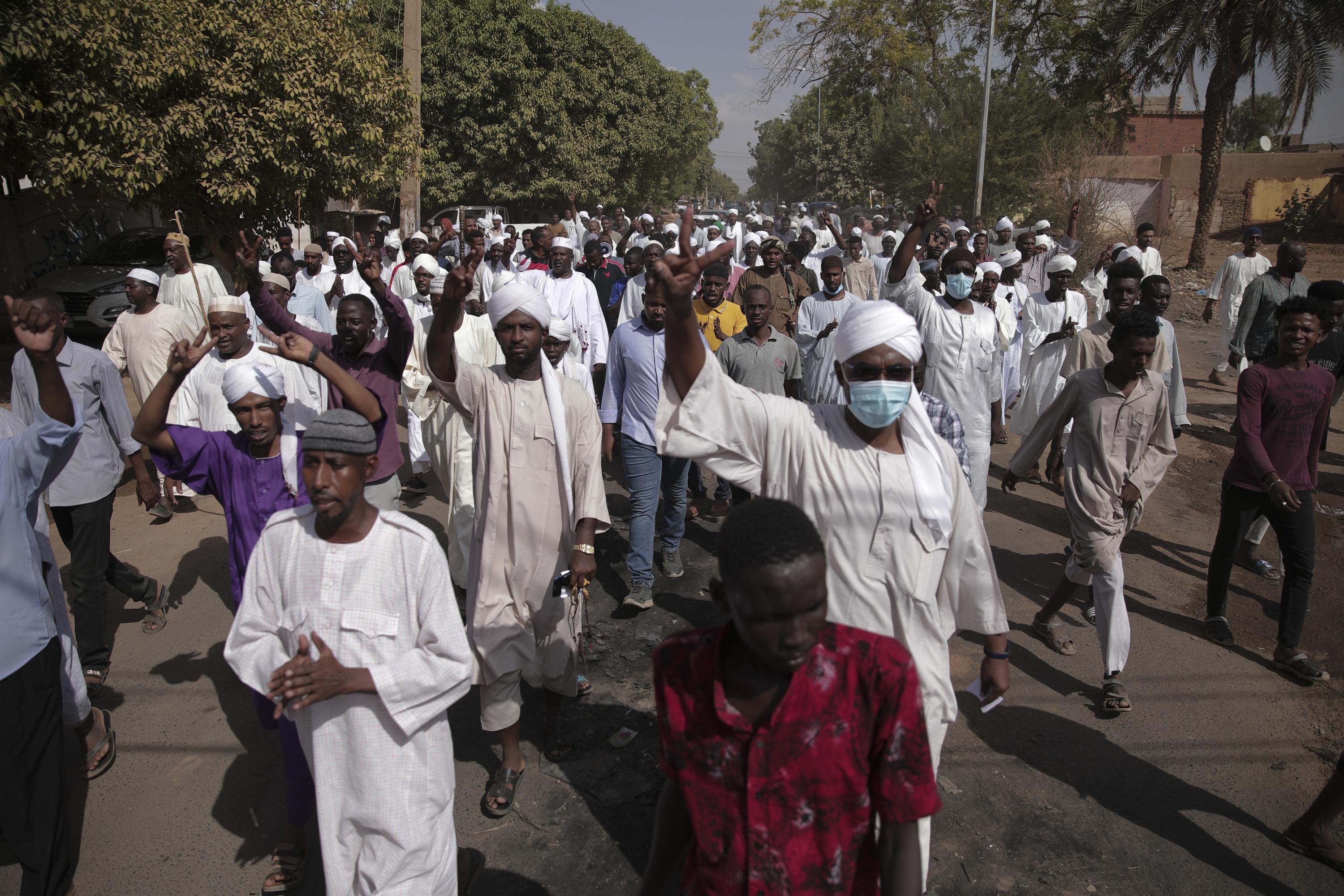 Thousands of Sudanese have taken to the streets, where whistles and drums accompany chants of “revolution, revolution” in protest of Monday’s coup, which threatens to derail the country’s fitful transition to democracy.

Pro-democracy groups had called for protests across the country to press demands for re-instating a deposed transitional government and releasing senior political figures from detention.

The United States and the United Nations had warned Sudan’s strongman, Gen. Abdel-Fattah Burhan, that they view the military’s treatment of the protesters as a test, and called for restraint.

Burhan has claimed that the transition to democracy would continue despite the military takeover, saying he would install a new technocrat government soon. The pro-democracy movement in Sudan fears the military has no intention of easing its grip, and will appoint politicians it can control.

Saturday’s protests were likely to increase pressure on the generals who face mounting condemnations from the U.S. and other Western countries to restore a civilian-led government.

Crowds began to gather Saturday afternoon in the capital of Khartoum and its twin city Omdurman. Marchers chanted “Give it up, Burhan,” and “revolution, revolution.” Some held up banners reading, “Going backward is impossible.”

The demonstrations were called by the Sudanese Professionals’ Association and the so-called Resistance Committees. Both were at the forefront of an uprising that toppled longtime autocrat Omar al-Bashir and his Islamist government in 2019.

They demand the dismantling of the now-ruling military council, led by Burhan, and the handover of the government to civilians. They also seek the dismantling of paramilitary groups and restructuring of the military, intelligence and security agencies. They want officers loyal to al-Bashir to be removed.

One of the protesters killed Saturday in Khartoum’s twin city of Omdurman was shot in his head, and the other in his stomach, the Sudan Doctors Committee said.

The committee, which is part of the Sudanese Professionals’ Association, said security forces had used live ammunition against protesters in Omdurman around the capital. It said an unspecified number of protesters were also wounded.

Elsewhere, security forces fired tear gas at protesters as they attempted to cross the Manshia Bridge over the Nile River to reach Khartoum’s downtown, said Mohammed Yousef al-Mustafa, a spokesman for the professionals’ association.

“No power-sharing mediation with the military council again,” he said. “They (the generals) have failed the transition and instated a coup.”

Al-Mustafa spoke with The Associated Press over the phone while he took part in the protest in Khartoum’s Manshia neighborhood.

Before the start of the protests, security forces had blocked major roads and bridges linking Khartoum’s neighborhoods. Security was tight downtown and outside the military’s headquarters, the site of a major sit-in camp in the 2019 uprising

Since the military takeover, there have been daily street protests. With Saturday’s fatal shooting, the overall number of people killed by the security forces since the coup rose to 11, according to the Sudan Doctors’ Committee and activists. At least 170 others have been injured, according to the U.N.

There were fears that security forces may again resort to violence to disperse protesters. Since Monday’s coup troops have fired live ammunition, rubber bullets and tear gas at anti-coup demonstrators. They also beat protesters with sticks and whips.

Representatives of the U.N. and the U.S. have urged the military to show restraint.

Late Friday, the U.N. special envoy for Sudan, Volker Perthes, met with Gen. Mohammed Hamdan Dagalo, a coup leader seen as close to Burhan. Dagalo commands the feared Rapid Support Forces, a paramilitary unit that controls the streets of the capital of Khartoum and played a major role in the coup.

He said the U.N.’s transition mission “is actively coordinating with mediation efforts currently underway to facilitate an inclusive dialogue, which remains the only path toward a peaceful solution to the current crisis.”

A Sudanese military official said Saturday that a U.N.-supported national committee began separate meetings with Prime Minister Abdalla Hamdok and Gen. Burhan to find a common ground for talks to resolve the dispute.

The official said Hamdok demanded the release of all government officials and political figures arrested since the coup. Burhan, the official said, gave an initial approval to release “most” of the detained, but rejected the release of others, including Khalid Omar, Minister of Cabinet Affairs, saying they face accusations of inciting troops for rebellion.

The official spoke on condition of anonymity as he wasn’t authorized to release the information.

Clément Nyaletsossi Voule, the U.N. special rapporteur on the right to freedom of peaceful assembly and association, also urged security forces to avoid violence against protesters. “They will be held individually accountable for any excessive use of force against protesters. We are monitoring,” he warned.

Burhan has claimed that the takeover was necessary to prevent a civil war, citing what he said were growing divisions among political groups. However, the takeover came less than a month before he was to have handed power over to a civilian.

Burhan installed himself as head of a military council that will rule Sudan until elections in July 2023. In an interview with Russia’s state-owned Sputnik news agency published Friday, Burhan said he would soon name a new premier who will form a Cabinet that is to share leadership of the country with the armed forces.

Observers say it’s doubtful the military will allow a full transition to civilian rule, if only to block civilian oversight of the military’s large financial holdings.