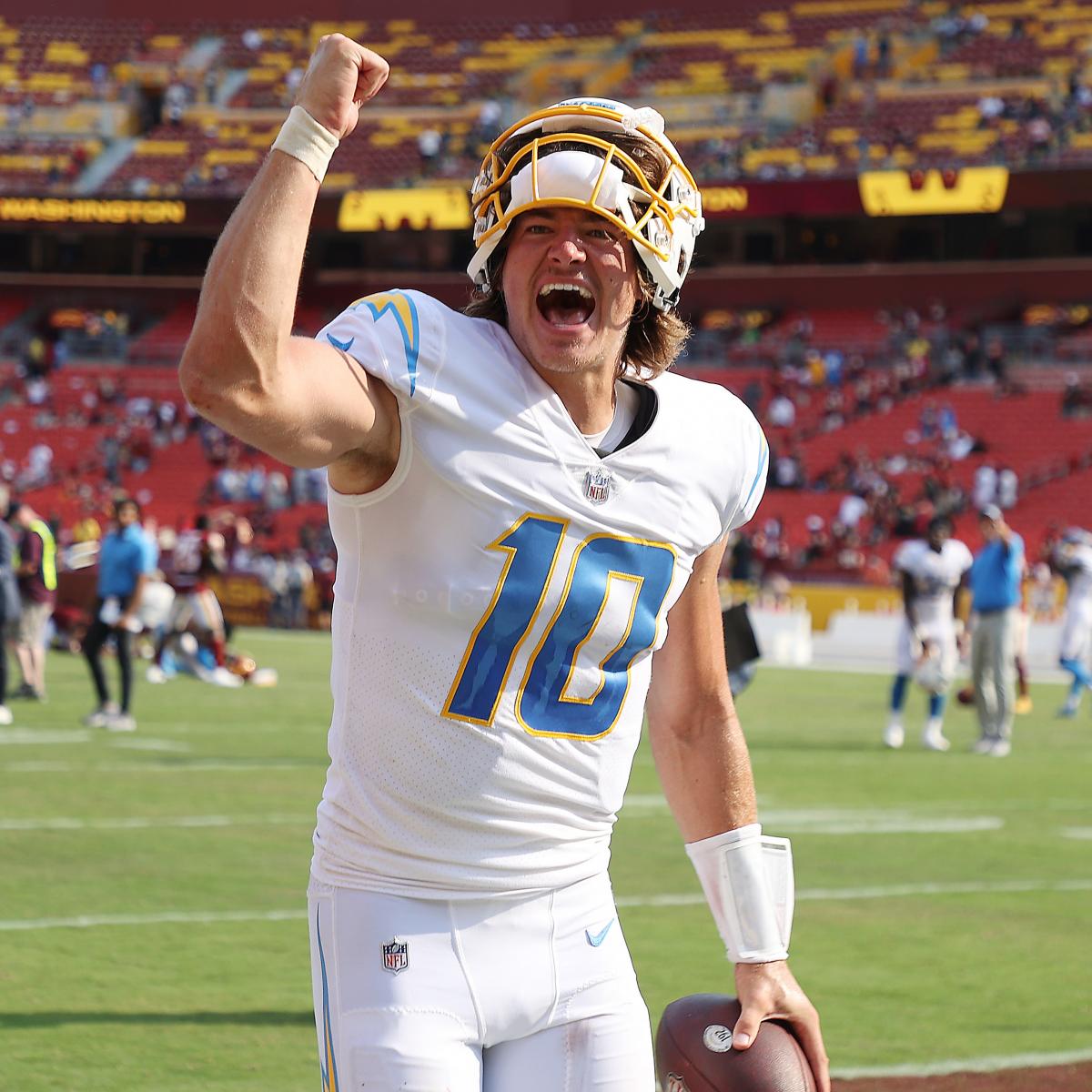 Three particular events on the NFL calendar lead to a special amount of overreaction: the first 24 hours of free agency, the first round of the draft and the first week of the regular season.

Thus, we aren’t here to tell you that the Green Bay Packers, Buffalo Bills, Tennessee Titans and New England Patriots are destined to go a combined 0-68. But all four supposed contenders suffered startling upsets along with the Minnesota Vikings, Washington Football Team and very nearly also the Kansas City Chiefs on Sunday.

It was an important reminder that Vegas sportsbooks clean up for a reason. The NFL is almost comically unpredictable, and we may need to reconsider our expectations for several notable teams and players entering Week 2 and beyond.

Let’s run through some examples from the opening batch of games.

The Kansas City Chiefs ran into limited resistance en route to Super Bowls in 2019 and 2020, but a strong season-opening road challenge by the Cleveland Browns at a raucous Arrowhead Stadium indicates K.C. will have to fight harder than ever to get back to that spot this winter.

The Browns led the Chiefs for practically the entire game and looked every bit on their level as the Kansas City defense looked vulnerable. The Chiefs offense remains stacked but wasn’t able to execute consistently in the red zone, and now it’s clear other teams are doing their best to exploit their weak spots.

Prior to Sunday, the Buffalo Bills and Baltimore Ravens joined Cleveland as the most obvious challengers to Kansas City. But while Buffalo suffered a tough home loss to open its season, the Pittsburgh Steelers reminded us in that game that we can’t count them out yet either. Buffalo has too much talent not to rebound, and now the defensively stout Steelers look like a factor again.

The New England Patriots also looked like they’d again be in the mix this year after Bill Belichick and Co. went on a wild offseason spending spree, and their Week 1 loss to the Miami Dolphins might have had a similar effect as Buffalo-Pittsburgh. The Pats won’t fall apart simply because they fell by a single point in their rookie quarterback’s debut, and now we definitely have to account for a rebuilt Miami team that could be extremely competitive if second-year first-round pick Tua Tagovailoa can take off at quarterback. At the very least, that Brian Flores-led defense looks as though it could become special.

Elsewhere, the Cincinnati Bengals and Los Angeles Chargers pulled off mild upsets of their own to start 1-0. Both teams are led by highly promising second-year quarterbacks who are loaded with offensive support, and both defenses have several strong pieces in place.

If Miami, Cincinnati and Los Angeles can rise up, if Cleveland, Pittsburgh and Baltimore are legit, and if Buffalo, New England, the Tennessee Titans and Indianapolis Colts can bounce back from Sunday losses, the AFC could be a deep gong show in 2021. And that’s not ideal for the two-time defending conference champs.

Elsewhere in Upsetland, the New Orleans Saints went out in their first game since Drew Brees’ retirement and handed the Green Bay Packers their most lopsided loss under Aaron Rodgers’ tutelage.

The 38-3 beatdown was shocking from a number of perspectives, starting with the fact that a defense that sustained several tough offseason losses was utterly dominant against the reigning MVP. Equally as awesome for Saints fans? Brees’ replacement, the mistake-prone Jameis Winston, threw five touchdown passes on a turnover-free day.

The Saints have been crushed by a salary-crap crunch in recent offseasons. Now, Brees is gone. On Sunday, because of the effects of Hurricane Ida on the Gulf Coast, they were forced to play at a neutral site instead of at the cacophonous Superdome. And yet they smashed one of the league’s best teams.

Sean Payton is a special coach, and the Saints remain special. Put the rebuild on hold.

For much of the offseason, we’ve been talking about the 2021 Packers campaign as a potential “Last Dance” for Green Bay—something that might resemble Michael Jordan’s final season with the Chicago Bulls. That’s because it appears there’s a decent chance Rodgers will move on in 2022.

But on Sunday, it often felt as though Rodgers had already done so.

It was his worst loss as a starting NFL quarterback. And while it’s possible that was an aberration, there’s also a chance Rodgers is resigned with limited support in what increasingly looks like an 11th straight non-Super Bowl season for the Pack.

The reality is, these Packers were never the 1990s Bulls. They have just the one title, which came with pretty much an entirely different roster and regime, more than a decade ago. Rodgers is a future Hall of Famer, but his team has never been close to dynasty range. Rodgers looked defeated Sunday, and unless that changes and he gets more support in the near future, it’s difficult to envision Green Bay keeping up with the Tampa Bay Buccaneers and/or whoever comes out of the jacked NFC West.

The NFC East hasn’t had a repeat champion since 2004. And sure enough, on Sunday, last year’s victor, the Washington Football Team, suffered a home upset at the hands of the new-look Chargers. In the process, they lost quarterback Ryan Fitzpatrick to a hip injury.

But Washington, Dallas and the New York Giants are all 0-1 after the G-Men looked like their same old mistake-prone selves in a Week 1 home loss to the Denver Broncos. And as a result, the team expected by most to finish last in the division, the Philadelphia Eagles, are alone in first place after a surprisingly impressive road upset over the Atlanta Falcons.

In smashing the Falcons 32-6, the Eagles reminded the football world that they’re still brimming with talent and experience in the trenches on both sides of the ball. An offensive line that was a wreck last season was healthy and productive, and the Eagles controlled the game up front on defense. It was a super-promising debut for new head coach Nick Sirianni and an encouraging maiden performance as a Week 1 starter for sophomore quarterback Jalen Hurts, who threw three touchdown passes and rushed for 62 yards in a turnover-free effort.

Once again, the NFC East is wide freakin’ open.

But there’s one upset we’ve yet to cover, and for obvious reasons. Nobody expects the Jacksonville Jaguars or Houston Texans to do much damage to anybody except themselves this season, but Houston was in particularly rough shape after a tumultuous offseason. At least the Jags have a lot to look forward to with No. 1 overall pick Trevor Lawrence at quarterback and the intriguing Urban Meyer taking over as head coach.

And yet, the Texans put up 449 yards while smashing the Jags 37-21 Sunday in Houston, with new (interim?) starting quarterback Tyrod Taylor going 21-of-33 with 291 yards, two touchdown passes and 40 rushing yards in a turnover-free showing.

Realistically, the Texans remain hot garbage. But if you’re expecting to simply take whoever is playing them every week in your survivor pool, you could be in trouble. They have some fight in them, and Taylor isn’t a horrible starter.

It’s also clear Lawrence will need time after throwing three interceptions in Houston, and it’s already fair to start asking questions about the Meyer hire. It’s entirely possible he’ll be one-and-done in Jacksonville, with owner Shad Khan realizing he made a mistake.