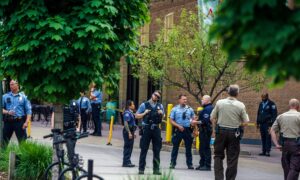 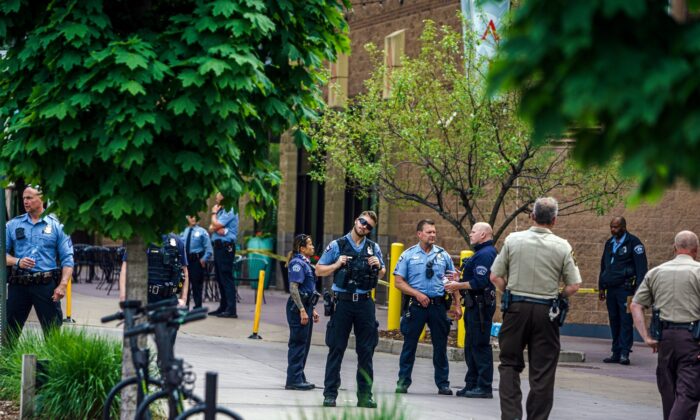 Police officers investigate a fatality in an officer involved shooting, in Minneapolis, Minn., on June 3, 2021. (Richard Tsong-Taatarii/Star Tribune via AP)

MINNEAPOLIS—A man was killed Thursday when authorities who were part of a task force that included U.S. Marshals fired their weapons after he allegedly displayed a handgun in Minneapolis’ Uptown neighborhood, the U.S. Marshals said.

The shooting happened shortly after 2 p.m. Thursday. The U.S. Marshals said preliminary information indicates task force members were attempting to arrest a man wanted on a state warrant for being a felon in possession of a firearm.

The man, who was in a parked car, didn’t comply with law enforcement and “produced a handgun resulting in task force members firing upon the subject,” the U.S. Marshals said in a statement. Task force members attempted life-saving measures, but he died at the scene, they said.

It was not clear how many law enforcement officers fired their weapons. A spokeswoman with the U.S. Marshals said the U.S. Marshals leads the task force, which is comprised of several agencies. Other agencies with personnel on the scene at the time of the shooting include sheriff’s offices from Hennepin, Anoka and Ramsey counties, the Minnesota Department of Corrections and the Department of Homeland Security.

The U.S. Marshals said a female who was in the vehicle was treated for minor injuries due to glass debris.

Few other details were provided. The state Bureau of Criminal Apprehension and the federal Bureau of Alcohol, Tobacco and Firearms both wrote on Twitter that they were responding to help investigate. The Marshals said the state BCA is leading the investigation.

The Minneapolis Police Department said it was not involved in the incident.

According to the Star Tribune, an aerial view of the top level of the parking ramp where Thursday’s shooting reportedly occurred showed a silver sport utility vehicle with a shattered back window. It was surrounded by many other vehicles near a white pop-up tent. Several officers were nearby and in a glass-enclosed stairwell.