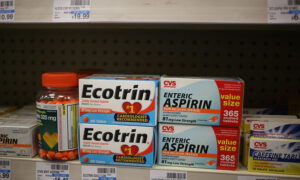 A U.S. government-funded task force for the first time recommended against the use of low-dose aspirin as a preventative measure against heart disease in adults over the age of 60.

The U.S. Preventative Services Task Force (USPTF) issued its draft recommendation on Oct. 12, stating that the use of the drug “has no net benefit” for the prevention of cardiovascular disease events in people 60 years or older.

A review of aspirin studies by USPTF showed that the drug’s use “with a 58% increase in major gastrointestinal bleeding.” Another analysis “showed an increase in intracranial bleeds” in people who took aspirin compared to those who did not.

“Although the increase in relative risk does not appear to differ based on age, the absolute risk of bleeding, and thus the magnitude of bleeding harm, does increase with age, and more so in adults age 60 years or older,” the recommendation stated. “Because of the very small number of fatal gastrointestinal bleeding events in trials, and inconsistent reporting, it is uncertain whether aspirin use increases fatal gastrointestinal bleeding.”

The draft recommendations are open to public comment until Nov. 8.

“The latest evidence is clear: starting a daily aspirin regimen in people who are 60 or older to prevent a first heart attack or stroke is not recommended,” UPTSTF member Chien-Wen Tseng, M.D., a professor at the University of Hawaii John A. Burns School of Medicine, said in a statement. “However, this Task Force recommendation is not for people already taking aspirin for a previous heart attack or stroke; they should continue to do so unless told otherwise by their clinician.”

In April this year, a peer-reviewed study found that aspirin use in COVID-19 patients was associated with a lower rate of in-hospital mortality, intensive care unit admission, and ventilator use.

COVID-19 is the disease caused by the CCP (Chinese Communist Party) virus, commonly known as the novel coronavirus.

While USPTF is funded by the U.S. government, its recommendations are independent. The task force members serve as volunteers and have expertise in “behavioral health, family medicine, geriatrics, internal medicine, pediatrics, obstetrics and gynecology, and nursing,” according to the task force’s website.

Ivan has reported for The Epoch Times on a variety of topics since 2011.