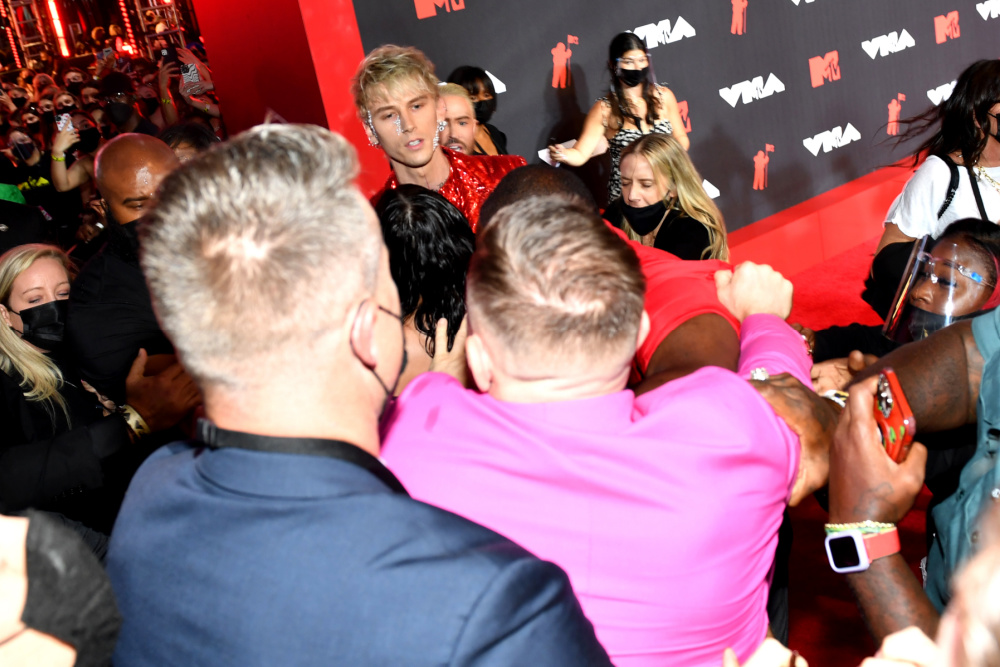 Conor McGregor made headlines for the wrong reasons again on Sunday with a reported altercation with Machine Gun Kelly at the MTV Video Music Awards.

According to TMZ, McGregor approached “MGK” at the award ceremony at Barclays Center in Brooklyn, N.Y., to ask for a photograph. He was apparently denied, which sparked the ire of the former two-division UFC champion.

The report claims “MGK” pushed McGregor, causing his drink to spill and knock over the walking cane he’s been using during recovery from the broken leg sustained in his loss to Dustin Poirier at UFC 264 in July. The report states McGregor attempted to throw the remains of his drink back at “MGK” while approaching him. They were reportedly separated before anything could get physical, and the situation deescalated.

There were several photographers on hand for the awards, and pictures and video of McGregor being restrained were captured (via Twitter):

Why is Conor trying to fight Machine Gun Kelly at the VMA awards. 😂😂😂😂 pic.twitter.com/MoN9qa9guU

Conor McGregor throws a drink at MGK on the red carpet (via ig:laurademytrk) pic.twitter.com/H0naCNbMta

McGregor’s team at Paradigm Sports Management did not immediately respond to MMA Junkie’s request for comment on the conflict. However, McGregor spoke to ET on the red carpet and gave his perspective.

“The Notorious” has remained stateside in the fallout of his trilogy-fight loss to Poirier at UFC 264. He’s spent his time in Los Angeles, where he underwent surgery and is undergoing physical therapy.

It’s uncertain if or when McGregor will return to the octagon for his next fight, but UFC president Dana White said in the aftermath of his injury that he expected the Irishman to be sidelines for no less than a year.

McGregor has still found a way to keep his name out there, though, from his Twitter rants to this latest incident with “MGK.”

The 33-year-old attended the MTV Video Music Awards alongside his fiancee, Dee Devlin, and they posed for pictures on the red carpet prior to the clash.