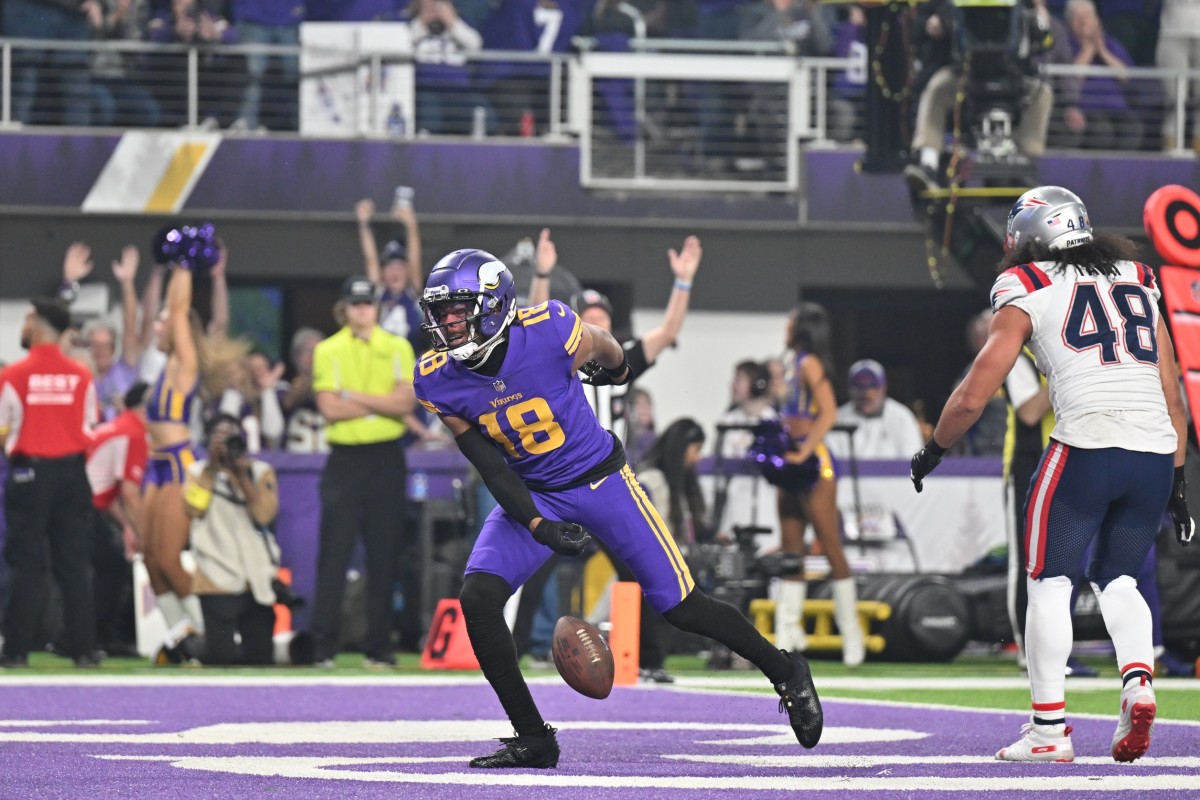 It wasn’t pretty – most Thursday games aren’t – but the Minnesota Vikings shook off the 37-point beating by the Cowboys and responded by putting up 33 points on what was the NFL’s No. 1 scoring defense entering Week 12.

The 33-26 victory gets Minnesota to 9-2 this season. Detroit losing to the Bills has the Vikings’ magic number in the NFC North down to two, meaning they could clinch the division as soon as Week 13.

The star was Justin Jefferson, whose nine catches for 139 yards and a touchdown continued his surge into the NFL MVP conversation. He made two spectacular catches, both in double coverage, that set up a pair of Minnesota touchdowns.

It was his catch in the fourth quarter that gained 36 yards and set the stage for a Kirk Cousins-to-Adam Thielen 15-yard touchdown on the next play, which proved to be the game-winning score.

Jefferson’s catch and Thielen’s touchdown were only possible because New England was called for a running into the kicker penalty, erasing a defensive stop and keeping Minnesota’s drive alive. It took Minnesota just three plays to take advantage and score.

New England’s offense, which had two offensive touchdowns in its past three games, shredded Minnesota’s defense the first three quarters but was then shut down in the fourth quarter. The Patriots scored on six of seven possessions to start the night but in the fourth quarter they punted twice, turned it over downs and then ran out of time on their final drive.

Adam Thielen caught a season-high nine passes for 61 yards and the aforementioned go-ahead touchdown. T.J. Hockenson had five catches for 43 yards and a touchdown.

Kirk Cousins, despite an overthrow for an interception in the first half, finished 30-of-37 for 299 yards and three touchdowns.

Minnesota’s rushing attack did nothing but kill time. Dalvin Cook had 42 yards on 23 carries and the Vikings had just 57 yards on the ground as a team.

Minnesota took a 7-0 lead on an opening drive touchdown from Cousins to Jefferson and the game was tied 16-16 at the half before New England went 75 yards on their opening drive of the third quarter, with Mac Jones finding Hunter Henry for a 37-yard touchdown and a 23-16 lead.

It was all Vikings from there, outscoring the Patriots 17-3 over the final 25 minutes, 54 seconds.