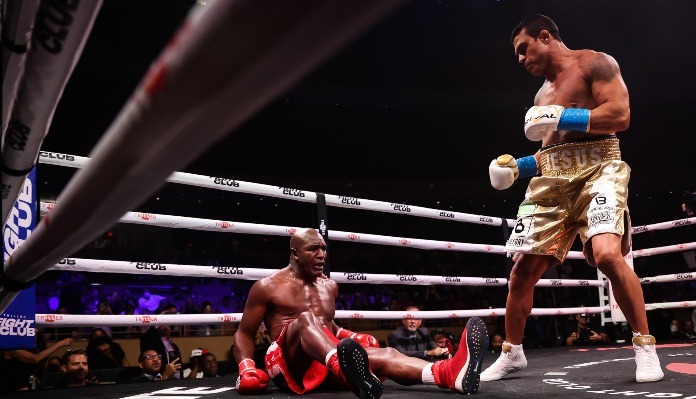 Vitor Belfort and Anderson Silva will not see their boxing record with an additional win.

In the lead-up to Triller Fight Club Legends 2, it was uncertain if the main event between Evander Holyfield and Vitor Belfort was an exhibition. Triller CEO, Ryan Kavanaugh revealed the day before Holyfield would decide if it would be considered a pro bout.

“If Holyfield doesn’t want this to go on his BoxRec due to his age, we’ll allow him to make the decision and still follow all the other rules,” Triller co-founder Ryan Kavanaugh told ESPN. “As of now the fighters are comfortable with how it stands and we’re going to revisit this over the next couple of days to decide. We’ve spoken to Holyfield and Vitor and the commission; no matter what, this will be scored as a pro fight, there will be a clear winner and it will be treated with pro rules.”

However, according to the commission, all the fights on the card including Holyfield vs. Belfort were approved to be pro bouts.

“We have approved this as a full pro bout,” the commission said about Holyfield-Belfort. “If Triller and the fighters elect to not have this go on BoxRec, we will honor that request, but pro boxing rules will still apply with judges, scoring, and a clear winner just as if it were a pro bout.”

Despite the approval to be pro bouts, the Florida State Boxing Commission revealed all of the bouts that happened at the Triller event were conducted as exhibitions rather than professional fights. Meaning, Holyfield and Tito Ortiz will not have a loss on their record while Belfort and Silva won’t get the KO win on their record.

“The fights Saturday were conducted as exhibitions,” a spokesperson from the commission told MMA Fighting on Monday. “The records will not count and will not be official.”

The news is a surprise given the fact Triller was promoting the fight as a real fight and never mentioned it as an exhibition. Yet, the fights still were exciting as Belfort scored a first-round TKO while Silva KO’d Ortiz in under 90 seconds. Unfortnately, they won’t get credit on his pro record, but they will have the highlights.

What do you make of all the Triller fights being exhibitions?