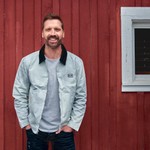 Below, Hayes tells Billboard about how the idea for the song came together, why his faith has helped prepare him for this level of success, Oreo shakes returning to Applebee’s and more.

You’re 41 and having the biggest hit of your career. Would you have been prepared for this success earlier?

It’s great timing for sure, as far as where my heart is and the life I’ve lived up until now. I’m also at a place where I can see how fleeting [success] is. I’ll be quite frank — I don’t want to be sad about success, but I still miss my dad [who died in March]. I still struggle each day. I’m six years sober and I know I’m five minutes from blowing that up. I’m not the greatest dad in the world. I would like to be. But every night I feel like I go to bed going, “I could do this better.”

When I was 21 or 31, I might have thought that [success] would change something. Maybe I would look in the mirror and say, “Man, I really like that person. I see now they’ve finally proved themselves to me.” Now I know that’s not what happens when you succeed. Success sometimes can magnify some of those issues that we all deal with and pains and struggles that we have.

So I look at it in a very realistic way. I do think God has prepared me for this, and I’m excited — but I’m careful. I’m so grateful that it is with my family, and not me alone. Most definitely if this had happened to me when I was 21, there’s no telling what would have ended up happening. It would not have been healthy for me at all.

The song addresses misconceptions fans may have that artists’ lives are much more glamorous than they really are. How did that idea come about as you, Cameron Bartolini, Josh Jenkins and Shane Stevens were writing it?

We began to unite over the misconception that every writer or artist drive[s] G-Wagons and that we all eat at The Palm five nights a week and that it’s just glamorous, red carpet every night. Over COVID, as I shared and exposed more and more of my family — honestly because of just lack of content — I noticed everybody was like, “Oh, wow, you just live in a normal house” or “We have that same trampoline,” and it was like, “Well, yeah, that’s who I am. I’m just like you. I just have a different job.”

Josh mentioned the title having “fancy” in it, and I told the room — when I’m on a road trip with my kids and wife, we always come to this point where I say, “Hey, are we going to fast food it or are we going to do some fancy? Y’all want to sit down and have a waiter or a waitress and just chill out for a second?” And that’s always an Applebee’s-ish restaurant, you know, something like that. And that’s fancy. That’s a big deal. My kids get jacked when I’m like, “Yeah, we’re not doing Sonic.”

Cameron Bartolini, who goes by Cambo, works with Doja Cat. Were you aware of that connection?

So I got to tell you, I had heard people say, “He’s got Doja Cat cuts” and I still don’t know what that is. I know he’s a big deal in that pop world. The fact that that was Cambo’s first write in Nashville was unreal. That’s just phenomenal to me. I’ve listened to a snippet of a Doja Cat song since my manager was like, “You know, Cambo does this stuff,” but I’m not familiar.

How did you and Lela put the dance together?

It’s my job to make sure everybody can do it — because Lela can do moves where I’m like, “Look, that looks awesome, but nobody’s even going to try to learn because it’s too hard.” That Sunday, we had just released the entire EP, my family was very excited. We came home from church and put [the song’s] chorus on repeat and made it simple and we popped it off on the porch. We did two takes and then we slapped it on TikTok. [By] that night it surpassed a million [views]. I mean, it’s bonkers. I just left a Planet Fitness and people were walking up to me and [saying] “My daughter loves the dance. Can I get a picture?”

Why do you think it has struck such a strong chord with people?

As far as the dance is concerned, when I watch me and my daughter interact, we were free. We weren’t trying. We didn’t have any expectations. It wasn’t calculated. It wasn’t curated. It’s almost like we were ignorant. I don’t even know if it’s a good dance. What does a real dancer think of it? Is it just terrible, you know? [Writing] the song, we were just free. It’s like we were four little boys on a playground. My team loved it, don’t get me wrong, but none of us could have predicted where we were going to be sitting, three or four weeks down the road.

We’re in talks. They’re sweet, sweet, sweet people. I don’t want to let the cat out of the bag, but one thing that truly excites me is that the Oreo shake actually came off the menu several years back and it’s coming back because of the song. You’re going to laugh at me, but I can’t wait ’till I have grandkids and we’re at Applebee’s and they’re drinking a shake. And I could say, “You know why’s it on the menu? It’s because I saved it.” I’m like, “Dude, I’m going to die and Oreo shakes will go on and on and on.” And I could take credit. It’s pretty awesome.

What’s your favorite part of this adventure so far?

My favorite part of the song will always be the day we wrote it. It’s just sitting in a room with people and literally taking nothing and making something. Every day could be the day that that song idea you get in that car could touch millions and millions of people’s lives. And millions of dads and daughters could do a dance together and millions of couples could do a dance together and make a memory that they’ll have the rest of their lives, that will be always attached to that song. I don’t know about you, but that’s magic right there.

A version of this story originally appeared in the July 17, 2021, issue of Billboard.