Want To Learn A New Language As An Adult? It’s Much Easier If You Learn Alongside The Kids

Home /Science/Want To Learn A New Language As An Adult? It’s Much Easier If You Learn Alongside The Kids 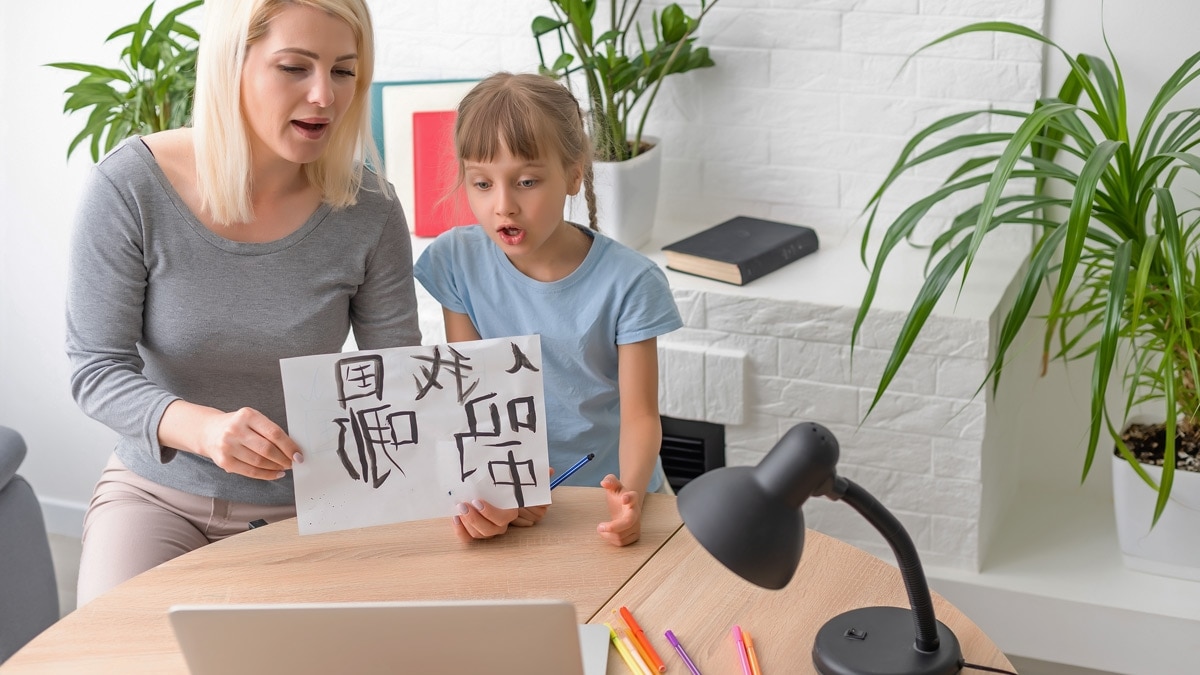 Heading out on a nature walk near their Carbondale, Colorado, home, Rachel Mulry and her three kids review some words: verde (green), naranja (orange), rojo (red). The family is learning Spanish together, and naming the colors of the fall leaves they’ll see is a great opportunity to practice their Spanish-speaking skills.

Scientists have long known that learning a new language is good for a child’s brain development. By rearranging and creating new connections in the brain, language learning can help kids focus more easily and resist distractions, deal better with tasks that require switching from one activity to another, and perform better in school.

Learning a new language has benefits for an adult’s brain, too—plus new research suggests that it’s not as difficult as experts previously thought for adults to pick up a new language. And immersing yourself in a new language as a family might just be one of the most effective—and easiest—ways to learn a new language.

“You’re constantly communicating with your family at home already,” says Christine Jernigan, author of Family Language Learning: Learn Another Language, Raise Bilingual Children. “All you have to do is switch to your new language and you have built-in conversation partners to practice with whenever you want—no commute or classroom needed.”

The brain benefits of learning a language

Grundy, who specializes in the study of bilingualism, says that when a child learns a new language, it’s sort of like they’re building highways from one part of their brain to “cities” in their noodle that they haven’t connected to before.

“The more white-matter tracts, or brain highways, you have, the more cities, or gray-matter areas of the brain, you can connect to,” Grundy says. The good news? More connections between white matter and gray matter lead to benefits such as improved memory skills, increased focus, and better self-control in kids.

And for parents who think that it’s impossible for adults to learn new languages, allow researchers at the University of Kansas to disagree with you. In a recent study measuring brain activity in adult Spanish language learners as they processed grammar, the scientists found brain responses similar to what a native speaker would show.

“So adults can draw on the parts of their brains that already know one language well to learn another,” says neurolinguistics professor Robert Fiorentino, who co-authored the study.

How to learn a new language as a family

According to Jernigan, adults likely struggle with new languages because they don’t have the same opportunities to immerse themselves as kids do when they’re in school. But a study published in the Journal of Child Language found that when children and adults have the same learning experiences—whether in a classroom or another communal setting—the rate at which they develop their language skills is relatively equal.

So it makes sense that when kids and adults learn a new language together—as a family—they can learn it faster. For instance, Jernigan points out that constantly speaking and hearing a language is essential to learning. Who better to do that with than the people you’re constantly around?

She adds that language learners need to be brave and willing to make mistakes, which is easier to do with your family than a class full of strangers.

So how do you incorporate language learning into your family’s everyday life? Here are some ideas for making learning a second language an ongoing family experience.

Keep it real. “People learn languages better when they use the language in ways that relate to their lives,” says Alison Gabriele, professor of second-language acquisition and co-author of the University of Kansas study. Mulry’s family loves cooking together, so they started by learning words and phrases for foods and kitchen tasks, and they make grocery lists in their target language.

Make friends. Lyn Wright, a professor at the University of Memphis specializing in language learning and bilingualism, points out that one of the best ways to learn a new language is to practice speaking it with others, whether they’re native speakers or novices. To find groups, check out your local college or university. Many have language clubs that plan regular lunches or get-togethers for people practicing a new language—and often are happy to include children. Cultural festivals and concerts are another opportunity to meet other families that speak your target language.

Take notes. Language isn’t just speaking; it’s reading and writing, too. Encourage your family to text each other in your target language. You could also surprise each other with notes on pillows, bathroom mirrors, inside dresser drawers—any place your family will find them.

Game the language. Mulry’s family likes to play games, such as Bingo or Go Fish, using vocabulary from their target language. You can even do this with games that don’t require much speaking—board games like chess or Monopoly, for example. You can announce your moves (“I’m moving three spaces …”) or say whose turn it is in your target language.

Your family can also try playing board or card games that are popular in cultures that speak your target language. Wright suggests doing some research online to discover what those games might be.