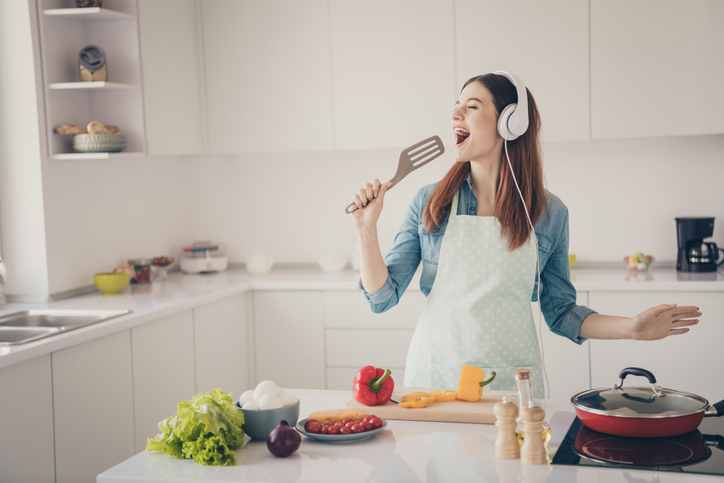 Researchers at Aarhus University in Denmark studied the effects of custom-composed soundtracks on food choices and eye-movements in consumers. They asked 215 volunteers from China and Denmark to imagine they were eating healthy and unhealthy meals and then chose the sound clip that best matched the experience. The researchers used this information to create a ‘healthy’ soundtrack — a jazz piece with a high-pitched piano melody in a slow tempo – and an ‘unhealthy’ soundtrack — composed with a lower-pitched, highly distorted and slightly dissonant guitar melody in a minor key and fast tempo.

A new group of around 100 participants were then asked listen to the ‘healthy’ soundtrack and the other half to the ‘unhealthy’ soundtrack. While listening to tracks they were asked to choose, using a mouse click and while eye-tracking data were also employed, to choose from various ‘healthy’ food options such fruit, vegetables and salad or ‘unhealthy’ food options such as doughnuts, potato chips and pizza.

While listening to the ‘healthy’ soundtrack, 70% of the Danish volunteers chose the healthier foods, which fell to 57% when listening to the ‘unhealthy’ composition. Similar results were seen among the Chinese participants.

“Our results indicate that, with strategically chosen soundscapes, it is possible to influence consumers’ decision-making processes and guide their attention towards healthier foods,”​ wrote Danni Peng-Li, who led the study, and his colleagues in the study, which was published in the journal Appetite​.

They added: “We have demonstrated that with strategic modulations in ambient soundscapes, it is possible to increase, not only the visual attention to healthy food items, but also the actual choice of them in consumers from both Denmark and China. More broadly, our study expands the view of auditory nudging and its underlying mechanisms, providing valuable knowledge for local as well as global food business interested in promoting healthy eating.”​

Danni Peng-Li told FoodNavigator the research adds to the evidence that music and sound can influence peoples’ food choices and behavior​.

Why does slower music nudge people towards healthier foods over fattier, saltier and more sugary options, as suggested by the study?

“One hypothesis is that more calming sounds or music can induce emotional or physiological relaxation or low arousal which can provide more cognitive resources that are necessary for taking more rational decisions,”​ explained Peng-Li. “If you listen to very stressful, high volume music with a high tempo, this can induce higher arousal and stress levels which leads to more distraction which can diminish your cognitive resources and your ability to make more rational decisions.”​

The study’s authors added their research brings implications for the retail and restaurant businesses who ‘want to encourage healthy eating but at the same time keep sales high’.

“More broadly, our study can work as an inspiration to practitioners and marketers with a culturally diverse customer base, who want to promote healthy eating in a cost-effective and efficient way. Obviously, direct usage of our healthy soundtrack should not necessarily be the case. However, changing the ‘choice architecture’ through ambient soundscapes, that contain specific acoustic parameters associated with healthy eating, could be done more strategically and non-arbitrarily. That is, the choice of music should be tailored towards the purpose of the nudge and congruent with the context.”​