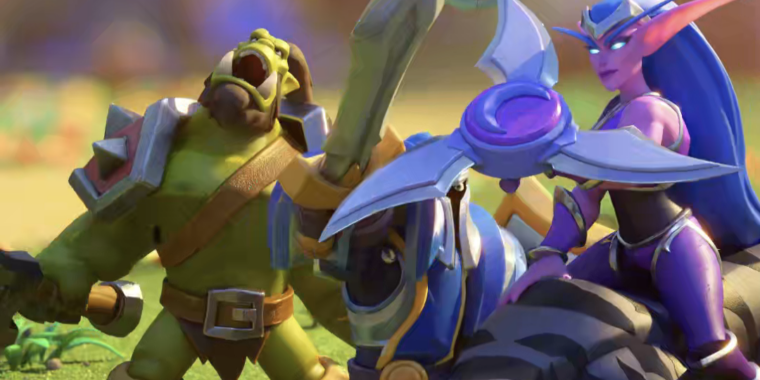 Blizzard Entertainment’s first real-time strategy game for smartphones, WarCraft Arclight Rumble, is slated to launch on iOS and Android later this year, with a tech beta going live sooner in various regions. Ahead of that launch, we were invited to test the game’s current version for a couple of days, and we can confirm that Blizzard is still pretty good at designing games for phones. (Even if they’ve brought at least one related gaffe upon themselves.)

In Arclight Rumble‘s case, however, a certain chicken-and-egg question comes up: When comparing this game to the wildly popular Clash Royale, exactly who is ripping off whom?

Both games overlap, as Blizzard’s new smartphone game adopts more than a few of Supercell’s well-trodden, touchscreen-friendly conventions. Yet Supercell’s game arguably borrows a lot from the original WarCraft series on PC—not just in its adherence to RTS traditions but also its medieval, primary-color aesthetic.

However you parse it, Arclight Rumble appears to add just enough depth to the smartphone RTS genre to stand out, though anyone new to this gaming space should brace themselves for a whole new universe of microtransactions. While not as aggressive as some of the smartphone world’s worst offenders, Arclight Rumble‘s approach will still be a tough sell to anyone who remembers buying WarCraft RTS games outright.

If you’ve played Clash Royale, you know the drill. The game defaults to one-on-one faceoffs without any fog of war, and the object is to send troops from your side of the battlefield to your opponent’s to destroy an enemy base while protecting your own. Troops appear as cards, randomly shuffled into players’ hands from a deck, and players spend a battle-specific currency to turn those cards into active troops (or spells that can be cast by tapping on the screen). More powerful units cost more currency, and each unit type has strengths and weaknesses over others, so savvy players will generate and direct troops with that in mind in order to succeed. (Melee beats ranged, ranged beats aerial, and aerial beats melee.)

That entire paragraph could apply to either game mentioned in this article, so what’s different in Arclight Rumble?

Blizzard’s game better splits the difference between a smartphone card-battler and a PC RTS. Battlefields in Arclight Rumble are bigger, and they typically don’t fit on a single smartphone screen, thus requiring finger swipes to move your viewpoint between your base (bottom of the screen) and your foe’s (top of the screen). These arenas are vertically oriented, so it’s more of an up-to-down swipe to glance around, not left-to-right, which feels good in practice.

Unlike a classic RTS, players don’t rapidly click a mouse to issue commands, but troop management is also not as wholly simplified here as in Clash Royale. Arclight Rumble players can tap an arrow on the ground to tell troops which way to advance when a path branches, and they otherwise automatically march forward and target foes along the way.

Blizzard adds the RTS-like convention of putting control points and gold mines onto its larger battlefields. If your troops can successfully wear down a control point, it becomes yours, and some of them come with auto-firing catapults. Once you take over one of these, you can opt to spawn troops that much closer to your foe’s base. And gold mines can be smacked by any of your melee troops, including a low-cost miner character who comes as a default in your deck, no matter what other cards you put into it. You need gold to spawn new troops, but the miner, who costs only one gold, can quickly grab two gold pieces from mines that regularly regenerate near your base. (There’s also the strategic option to spend your allotment of gold to move troops toward enemies’ gold mines—especially for special troops that can be freely spawned outside of your control points.)

Increasing the game’s average map size and dotting each with control points is an interesting tweak to the fits-on-one-screen combat of Clash Royale, and mid-arena control strategy makes this game feel deeper than some of its peers. But such an expansion in scope exposes how simple these smartphone strategy games can feel once play hits a higher level. In particular, there’s no way to contend with Blizzard’s auto-targeting failures. As of press time, I’ve seen my melee troops turn around and react to enemies that have passed them by when two battling lanes criss-cross. This happens even when I’ve devoted my limited gold economy to a massive rush meant to bombard my foe’s base, my own defenses be damned. There’s no troop tag for “kiting” in this game, which might have indicated that enemies could lure my melee forces away from my objective.