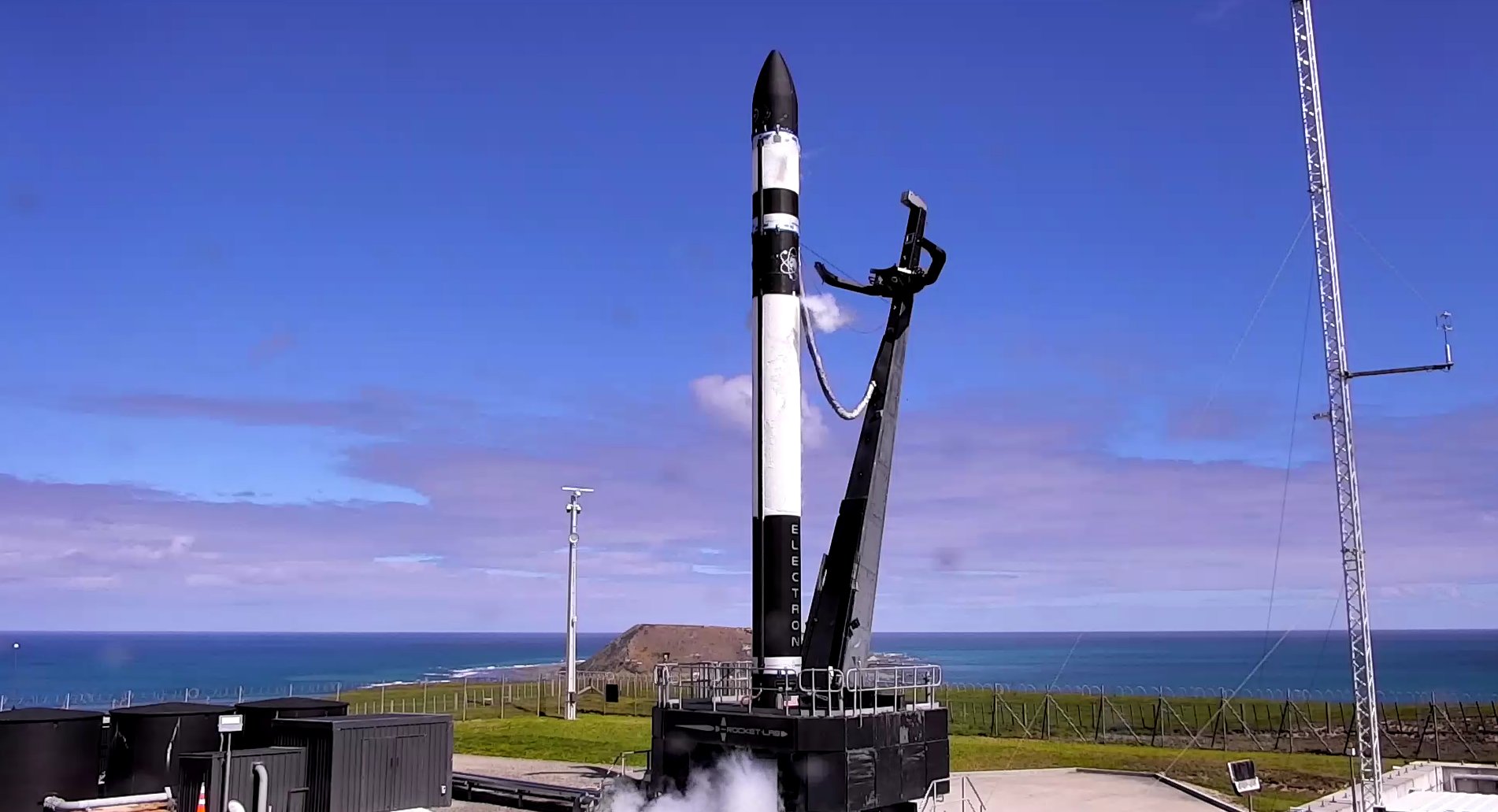 Rocket Lab will launch a classified satellite for the U.S. Space Force early Thursday (June 29), and you can watch it live here.

The experimental research and development satellite, called Monolith, will lift off atop a Rocket Lab Electron rocket from the Mahia Peninsula in New Zealand, during a two-hour launch window that opens at 6 p.m. local time New Zealand (2 a.m. EDT; 0600 GMT).

You can watch the launch live here in the window above, courtesy of Rocket Lab, or directly via the company’s website at rocketlabusa.com/live-stream. The live broadcast will begin about 20 minutes before liftoff.

Related: Rocket Lab and its Electron booster in photos

The dedicated mission is scheduled for lift-off on July 29, 2021 NZT (July 29 UTC) and will see Electron deploy an Air Force Research Laboratory-sponsored demonstration satellite called Monolith. The satellite will explore and demonstrate the use of a deployable sensor, where the sensor’s mass is a substantial fraction of the total mass of the spacecraft, changing the spacecraft’s dynamic properties and testing ability to maintain spacecraft attitude control. Analysis from the use of a deployable sensor aims to enable the use of smaller satellite buses when building future deployable sensors such as weather satellites, thereby reducing the cost, complexity, and development timelines. The satellite will also provide a platform to test future space protection capabilities.

The launch window extends for 12 days, with lift-off scheduled as follows:

The mission was procured by the Department of Defense (DoD) Space Test Program (STP) and the Rocket Systems Launch Program (RSLP), both based at Kirtland Air Force Base, New Mexico.; in partnership with the Defense Innovation Unit (DIU) as part of the Rapid Agile Launch Initiative (RALI).  The mission is being managed by the Launch Enterprise’s Small Launch and Targets Division, which is part of the USSF’s launch organization of choice. The mission has been named ‘It’s a Little Chile Up Here’ in a nod to the beloved green chile of New Mexico where the Space Test Program is based.

‘It’s a Little Chile Up Here’ will be Rocket Lab’s fourth launch for the year and the company’s 21st Electron launch overall.

Originally slated for lift-off from Launch Complex 2 (LC-2) at the Mid-Atlantic Regional Spaceport on NASA’s Wallops Island, Virginia, the mission has been transferred to Launch Complex 1 (LC-1) in New Zealand while NASA continues certification processes for autonomous flight termination system software for launches from LC-2.

The mission follows on from a previous Rocket Lab launch under the same agreement, the STP-27RD mission launched by Electron in May 2019. That mission, named ‘’That’s a Funny Looking Cactus’, saw Electron deploy three research and development satellites for the Space Test Program.

“We’re excited to have another Electron on the pad for the Space Test Program,” said Rocket Lab CEO and founder, Peter Beck. “We’re proud to once again demonstrate the flexible and resilient space access required by our government partners. The Space Test Program has a long history of developing advanced space and launch capabilities that we’ve all come to rely on, from global positioning systems, satellite communications, meteorological satellites, and space domain awareness capabilities. We’re proud to support the continuation of that innovation through rapid and agile launch on Electron.”

From the U.S. Space Force:

The mission was procured by the Department of Defense’s Space Test Program (STP) and the Rocket Systems Launch Program (RSLP), both part of the USSF’s Space and Missile Systems Center at Kirtland Air Force Base, New Mexico.

This launch, in partnership with the Defense Innovation Unit (DIU) as part of the Rapid Agile Launch Initiative (RALI), is named ‘It’s a Little Chile Up Here’ in a nod to the beloved green chile of New Mexico where the Space Test Program is based, and is being managed by SMC Launch Enterprise’s RSLP, which is part of the USSF’s launch service of choice.

The upcoming Rocket Lab launch is a follow-on effort to an earlier mission under the same agreement and one of several planned launches in 2021 that will demonstrate the ability of the emerging small launch industry to provide responsive and affordable space access for the USSF and the DoD.

Monolith is an Air Force Research Lab program designed to explore the application of small satellites for DoD programs. The demonstration will determine if the 6U (2x3x1) or 12U (2x3x2) bus sizes can be configured such that a large deployable sensor can be installed in one of the 2x3x1 side faces.  This satellite will further explore and demonstrate the use of a deployable sensor, where the sensor’s mass is a substantial fraction of the total mass of the spacecraft, changing the spacecraft’s dynamic properties and testing our ability to maintain spacecraft attitude control.

Analysis from the use of a deployable sensor will enable the U.S. to use a smaller bus when building future deployable sensors such as weather satellites, thereby reducing the cost, complexity, and development timelines.  The satellite will also provide a platform to test future space protection capabilities.

A new Russian module will dock with the International Space Station on Thursday (July 29), and you can watch it live here.

The Multipurpose Laboratory Module (MLM), also known as Nauka, is expected to arrive at the orbiting laboratory at 9:24 a.m. EDT (1324 GMT). A live broadcast of the docking will begin at 8:30 a.m. EDT (1230 GMT), and you can watch it live in the window above, courtesy of NASA TV.

Nauka launched to orbit last Wednesday (July 21), lifting off on a Russian Proton rocket from the Baikonur Cosmodrome in Kazakhstan.

The MLM deployed its solar arrays and navigational antennas as planned. After Nauka completes eight days in free-flight to allow Russian flight controllers to evaluate its systems, the 43-foot long, 23-ton module will automatically link up to the port on the Earth-facing side of the Russian segment of the International Space Station, which will be vacated by the departure of Pirs. Docking is scheduled for 9:25 a.m. Thursday, July 29, with live coverage beginning at 8:30 a.m.

Pirs will vacate the space station attached to the uncrewed ISS Progress 77 spacecraft, which is scheduled to undock at 9:15 a.m. Friday, July 23. Live coverage on NASA Television, the NASA app, and the agency’s website will begin at 8:45 a.m. A few hours later, Progress’ engines will fire in a deorbit maneuver to send the cargo craft and Pirs into a destructive reentry in the Earth’s atmosphere over the Pacific Ocean. Deorbit and reentry will not be covered on NASA TV.

Boeing’s Starliner astronaut taxi is scheduled to attempt its second uncrewed test flight to the International Space Station on July 30.

A news conference with NASA Administrator Bill Nelson is scheduled for Thursday (July 29) at 10:30 a.m. EDT (1430 GMT), and you can watch it live in the window above, courtesy of NASA TV. (Until the live stream begins, you can watch a video of the Starliner capsule being mated to the Atlas V rocket during launch preparations at Cape Canaveral.)

NASA will provide coverage of the upcoming prelaunch, launch, and docking activities for the agency’s Boeing Orbital Flight Test-2 (OFT-2) mission to the International Space Station. Scheduled to launch at 2:53 p.m. EDT Friday, July 30, OFT-2 is the second uncrewed flight for Boeing’s CST-100 Starliner spacecraft as part of the agency’s Commercial Crew Program.

Starliner will launch on a United Launch Alliance (ULA) Atlas V rocket from Space Launch Complex-41 at Cape Canaveral Space Force Station in Florida. About 31 minutes after launch, Starliner will reach its preliminary orbit. It is scheduled to dock to the space station at 3:06 p.m. Saturday, July 31. Prelaunch activities, launch, and docking will air live on NASA Television, the NASA app, and the agency’s website.

The spacecraft will carry more than 400 pounds of NASA cargo and crew supplies to the space station and return to Earth with more than 550 pounds of cargo, including reusable Nitrogen Oxygen Recharge System (NORS) tanks that provide breathable air to station crew members.

OFT-2 will demonstrate the end-to-end capabilities of the Starliner spacecraft and Atlas V rocket from launch to docking to a return to Earth in the desert of the western United States. The uncrewed mission will provide valuable data toward NASA certifying Boeing’s crew transportation system for regular flights with astronauts to and from the space station.

11 a.m. – Crew and Science Briefing on NASA TV, with the following participants: