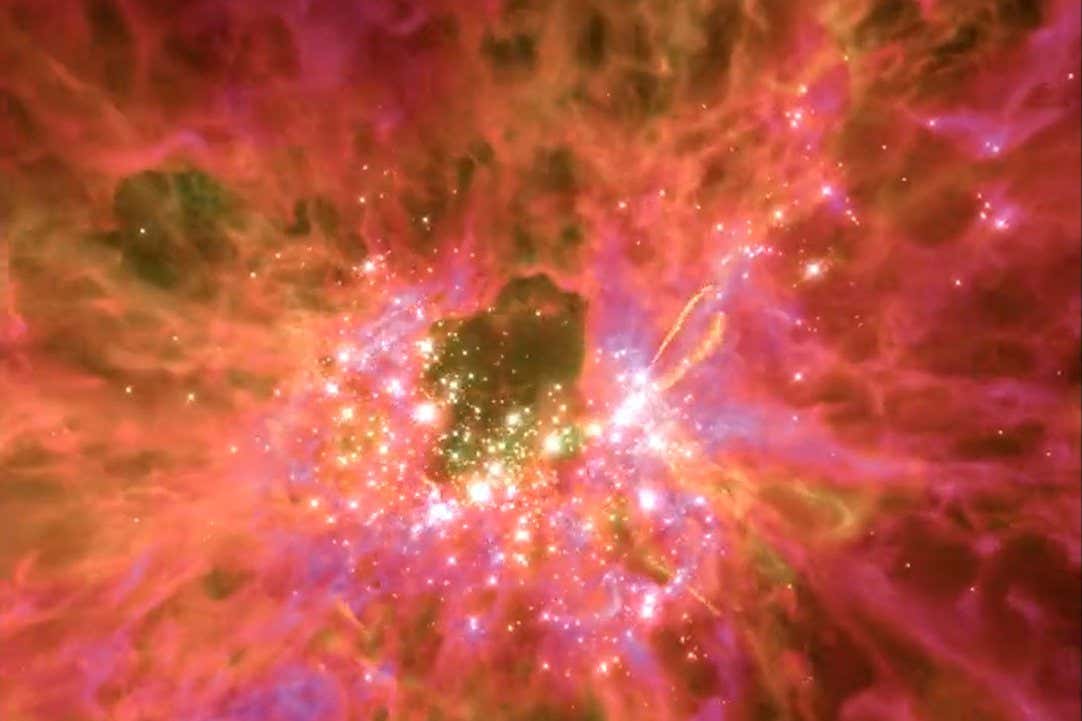 The most detailed simulations to date of giant molecular clouds (GMCs) hint that we may need to rethink our understanding of how stars form in these vast cosmic objects.

GMCs, sometimes referred to as stellar nurseries, contain mainly hydrogen molecules. They are at least 10,000 time the mass of our sun and about 15 to 650 light years across. Within the cloud, hydrogen molecules can clump together. When these clumps reach a certain density, stars can form.

While the basic process of star formation is well-understood, there are still many unknowns.

Now, Mike Grudić at Carnegie Observatories in California and his colleagues have shed more light on the mysteries by running one of the most advanced giant molecular cloud simulations yet.

Building upon previous studies as part of the STARFORGE project, Grudić and his team developed a GMC simulation that incorporates all major physical feedback mechanisms – such as stellar winds, magnetic fields and gravity – for the first time.

The simulation starts with a cloud that has an initial mass 20,000 times that of our sun and a diameter of 65 light years.

As the simulation progresses, brighter and more massive stars form, which in turn emit radiation and stellar winds that sweep through the GMC. The team allowed the simulation to run for around 9 million years. It ends shortly after one of the first stars formed by the cloud has exploded in a supernova. In this time, roughly 1000 stars formed.

“One of the surprises that we saw [is that] stars can require a significant amount of time to form,” says Grudić. The team found that for massive stars – those more than 10 times the mass of our sun – formation can take as long as 3 million years and an average of around 1 million years, which is an order of magnitude longer than typically quoted.

Grudić hopes this simulation can be used to pick apart stellar evolution in greater detail than before. For example, the model can be used to trace a star back in time to see where its mass originally came from. By tweaking the constraints, the team can also build a more accurate picture of which physical mechanisms are most important in star formation.

“Star formation is complicated,” says Grudić. “It involves many different processes acting together, and you have to put all of the different ingredients together in order to get a result that actually resembles reality.”

Sign up to Lost in Space-Time, a free monthly newsletter on the weirdness of reality