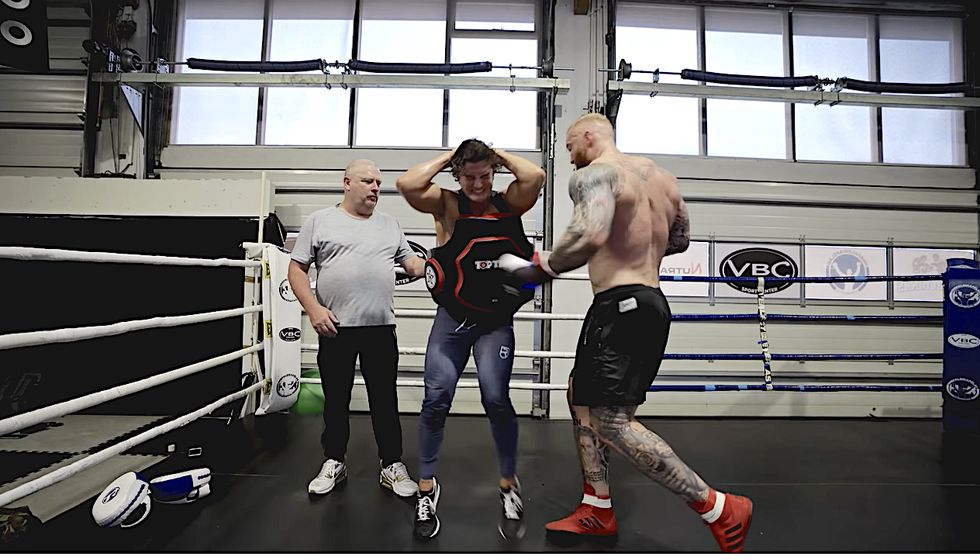 In the meantime, fans will have to make do with a stunt seemingly inspired by Hall’s frequent YouTube antics. Earlier today, Bjornsson published a new video to his own channel in which he challenged bodybuilder Jesse James West to absorb a full-force punch to the chest (all while wearing protective gear, it should be noted).

The challenge mirrored a popular video from earlier in the year in which Eddie Hall punched Olympic gymnast Nile Wilson with so much force that it lifted Wilson completely off the ground. (Hall later repeated the challenge with bodybuilder Ryan Terry, who did not go flying through the air like Wilson, but still seemed rattled by the punch’s impact.)

As the video begins, West seems understandably concerned about the side-effects of absorbing a full-power blow from the 6’9″ deadlift world record holder. “You might kill me, I should probably sign a waiver,” he says. After some brief introductions and a light warmup, the two get down to business (with West, of course, making a plea for new subscribers before getting potentially TKO’d).

Following a similar format to Hall’s videos, the two create a kind of masochistic buildup, with the punches arriving in 20-percent power increments. After the first punch, West is already doubled over in pain and rolling around on the ground. (Thor, well, mostly looks kind of bored and/or mildly concerned.) Spoiler: West makes it to about “60 percent” intensity before he’s in rough shape, and wisely calls things off.

“No, no, I think he’ll die,” he says, responding to whether or not he wants to keep going. It begs the question just how damaging a punch would be if Thor put all of his strength behind it. One of these days, perhaps once Eddie Hall heals that torn bicep, we just might find out.