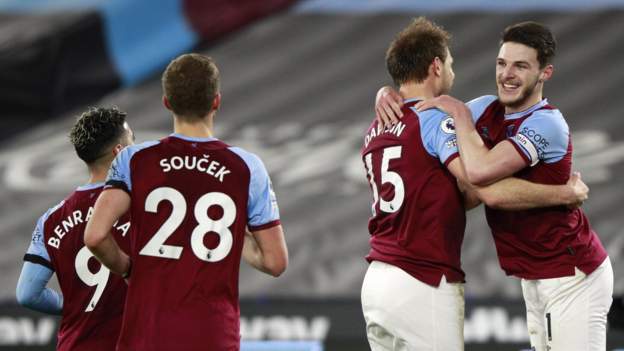 Midfielder Declan Rice said West Ham is a “special place to be” as they maintained their unlikely push for a place in next season’s Champions League with victory over Leeds United.

David Moyes’ side climbed to fifth in the Premier League – two points behind Chelsea, who beat Everton 2-0 earlier on Monday – and have a game in hand on their London rivals.

Jesse Lingard sparked West Ham into life at London Stadium when his menacing run into the penalty area drew a foul from Luke Ayling. Lingard, on loan from Manchester United, converted the rebound after his spot-kick was saved by Illan Meslier.

Leeds had found the net twice in a blistering opening spell, but Tyler Roberts’ finish was ruled out for a marginal offside against Helder Costa, and Raphinha ran the ball out of play before crossing to Patrick Bamford.

But they were two goals down before half-time when the unmarked Craig Dawson headed in Aaron Cresswell’s corner.

Marcelo Bielsa’s Leeds went close to a response five minutes after the restart when Raphinha’s sensational overhead attempt was tipped over by Lukasz Fabianski, while Bamford blazed over from Raphinha’s cut-back and Dawson cleared off the line as Leeds chased a late lifeline.

Pablo Fornals struck the crossbar for the hosts with a dipping second-half shot, but the Hammers ultimately held firm at the back to see out the three points.

“I’m disappointed with the performance,” England international Rice told Sky Sports. “We won but Leeds caused us a problems. Now we are starting to learn how to win ugly.

“This is the best squad I have been a part of. You look forward to training and seeing the lads and that shows on the pitch. We are fighting for each other. It is real special place to be at the moment. The place has a real buzz about it.

“It is hard to say we are going to be [in the] Champions League – there are so many games left. It will be a real tough test, but look where we are now and it is a massive upgrade. It is in our hands. If we want to believe we can be a European team we need to win the big games”.

Rice and Soucek at heart of West Ham efforts

Moyes said on Sunday that he would not sell Rice for £100m, which was reported to be the club’s valuation.

This match was the latest reminder of why Moyes is keen to ward off potential suitors as Rice, alongside the equally dependable Tomas Soucek, proved the antidote to Leeds’ incessant pressing, particularly in a second half which the visitors dominated for large periods.

Such solid foundations enable Lingard to shine. This was his fourth goal in six league appearances since his January move – as many as he had managed in his previous 38 in the competition for United.

Dawson, on loan from Watford, continues to prove as shrewd a signing as any. This was his 11th successive league start at the heart of West Ham’s defence and his fourth goal in all competitions this term.

Moyes claimed the experienced centre-back was “worthy” of a permanent deal after a match in which Dawson was involved at both ends, having hit a post with another header before half-time and somehow prevented Rodrigo’s shot creeping over the line in the closing stages.

A European place in any form would mark significant progress for a West Ham side that finished only five points clear of the relegation zone last season. With 11 games to play, a Champions League place remains a real possibility.

“We were resilient. We didn’t play well tonight but I don’t think Leeds help you play well – you have got to earn it,” Moyes told BBC Sport.

On West Ham’s top-four hopes, he said: “We’ve always had belief we can do something special. When you get near the top it gives you a big incentive.

“I was gutted when we dropped out of the top four last week. There are a lot of good teams around us and if we don’t make it it’s because they were better than us.”

A first season back in the Premier League after a 16-year absence was first and foremost about safety for Leeds, and that objective appears almost guaranteed with a nine-point cushion separating Bielsa’s side from the bottom three.

There is no denying that Bielsa’s all-or-nothing approach has paid off, with Leeds in 11th and in contention for a top-half finish. They have drawn only two league games this season and none of their past 18.

Aided perhaps by a nine-day break since their 1-0 defeat by Aston Villa, Leeds played in typically relentless style, and on another occasion the result could have been different.

Welcoming back midfield stalwart Kalvin Phillips from injury, they dominated possession and had 15 attempts at goal in the second half, but poor finishing consigned them to a fourth defeat in five league games.

Striker Bamford, with five shots, was as guilty as any of profligacy and was visibly frustrated when he failed to even find the target from Raphinha’s cut-back.

That Rodrigo’s shot from close range failed to find its way over the line before Dawson could clear suggested it was simply not Leeds’ night.

“The first 15 minutes in the first half was the best for us in the game,” Bielsa told BBC Sport. “In the second half the dominance was continuous. In that hour of play we had sufficient chances for a different result, but when they dominated for 30 minutes they scored twice.”

On conceding from a set-piece, he added: “Disappointed is not the word. I know it is a problem that exists. I am the one in charge of finding a solution.”

A first top-flight double since 1930 – the stats

Leeds host Chelsea on Saturday at 12:30 GMT, while West Ham travel to Old Trafford to face Manchester United on Sunday at 19:15.