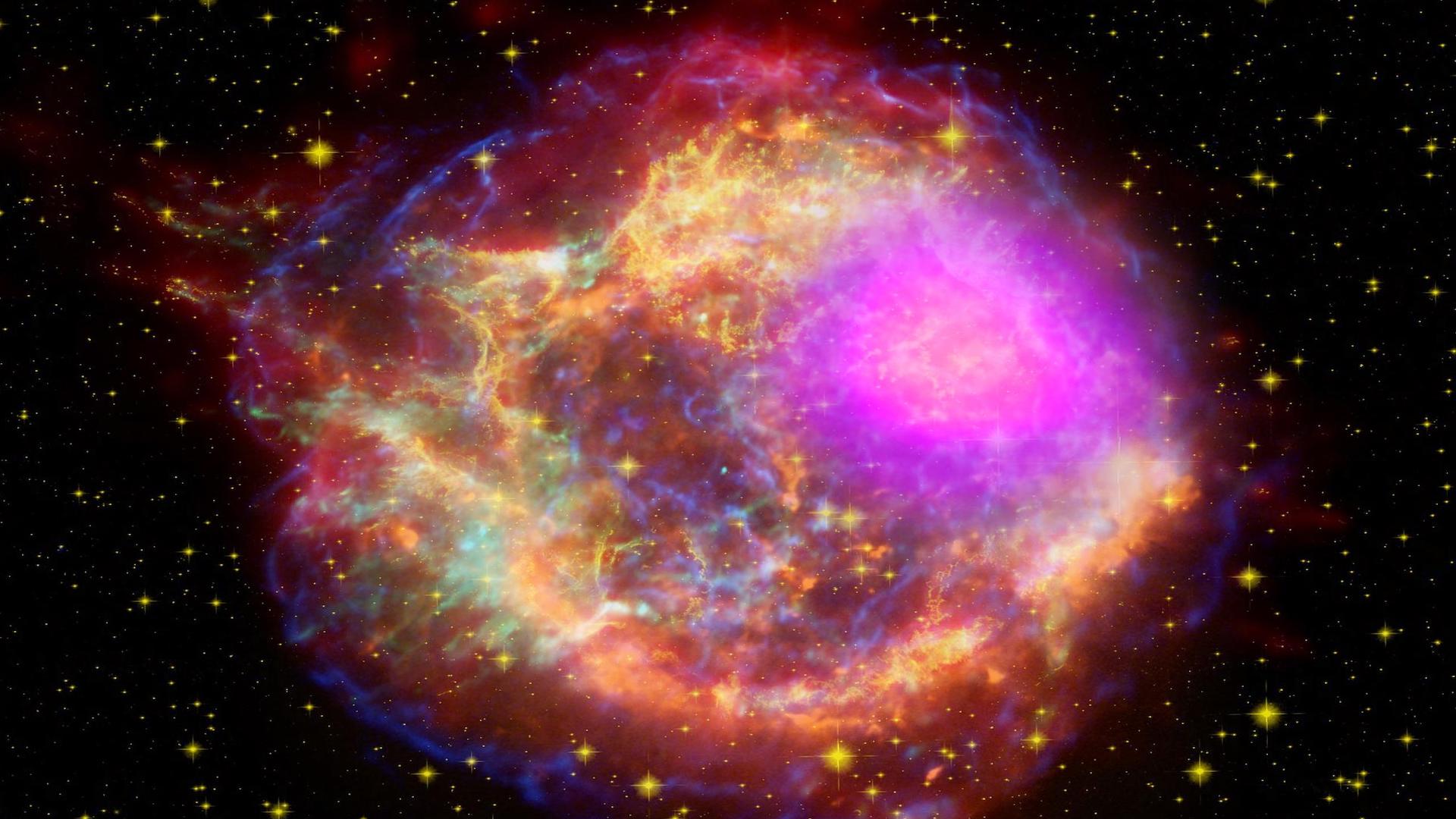 Every cubic centimeter of space is soaked with these cosmic rays: tiny, subatomic particles constantly streaming through it. Cosmic rays are mostly made up of protons, but occasionally include heavier atomic nuclei. They travel at nearly the speed of light —- one detected cosmic ray, known cheekily as the “OMG particle” because of its extreme energy, slammed into our atmosphere in 1991 while traveling at 99.99999999999999999999951% the speed of light, according to the McDonald Institute’s Hyperphysics reference page.

Despite the name, cosmic rays are not rays at all. But in 1911, when scientist Viktor Hess sent the first cosmic ray detectors to an altitude of 5,300 meters (17,388 feet) into the atmosphere, he couldn’t tell the difference between particles and electromagnetic radiation, according to NobelPrize.org. (Hess would go on to win a Nobel Prize for his work.) Whatever they were made of, they were beams of super-high energy from space. Even though later experiments would reveal their particle nature, the name stuck.

Where do cosmic rays come from?

Cosmic rays come from a variety of sources — all of them intense. When giant stars die, they turn themselves inside out in a matter of seconds in a fantastic explosion known as a supernova. A single supernova event can outshine an entire galaxy‘s worth of stars, and so they provide enough energy to accelerate particles to nearly lightspeed.

Stellar mergers can also generate the required energies, along with the birth of new stars, tidal disruption events (when a star gets eaten by a black hole), and the frenetic accretion disks around massive black holes. They all release cosmic rays at a variety of energies, which then go on to flood the cosmos.

But pinpointing where cosmic rays come from is a difficult task, according to the European Organization for Nuclear Research (CERN). Since they are charged particles, they respond to magnetic fields. Our Milky Way galaxy has a weak (but large) magnetic field, which deflects the paths of any cosmic rays streaming in from the rest of the universe. By the time these cosmic rays from outside the galaxy arrive at our detectors on Earth, they come in from random directions, with no discernable origin.

Modern-day astronomers have a variety of tools available to hunt for these high-energy particles. The simplest method is through direct detection: build a box and wait for a cosmic ray to strike it, and record the result. Such detectors have been outfitted on the International Space Station, for example. But these are limited in size and only train their sights on a small portion of the observable universe, and so the largest cosmic ray observatories use indirect methods.

Cosmic rays constantly strike Earth’s atmosphere, according to NASA. When they do, they release their pent-up energy in the form of a shower of secondary particles which then make their way to the ground. That shower can then be detected, such as with the Pierre Auger observatory in Argentina. You can even build a cosmic ray detector at home: soak a felt pad in isopropyl alcohol and set it above some dry ice. The alcohol will form a supersaturated vapor. When a cosmic ray passes through, it will leave a visible trail in the vapor. You can find instructions on this CERN website.

With your homemade cosmic ray detector you can expect to see about one low-energy (about 10^10 electronvolts) cosmic ray per square meter per second. Higher-energy ones, about 10^15 eV, strike one square meter every year.

Cosmic rays come in a variety of different energy levels.The highest-energy cosmic rays, known as ultra-high energy cosmic rays, or UHERCs, are the rarest, hitting one square kilometer every year. That’s why observatories like Perre Auger are so massive — they create a bigger collecting surface. “We need giant experiments because the highest energy cosmic rays are extremely rare,” Noémie Globus, a postdoctoral researcher at the ELI Beamlines experiment in the Czech Republic and the Flatiron Institute in New York City, and an expert in cosmic rays, told Live Science.

These UHERCS aren’t just the rarest of the cosmic rays, they are also among the most mysterious.

“We don’t understand the origins of the highest-energy cosmic rays,” Globus said. “It is simply unknown. I have always been amazed by the energies of these particles.”

Cosmic rays of all energies are, essentially, horrible for humans and their objects. They can disrupt electronics and mess up digital cameras. As a form of ionizing radiation, they can have a variety of health consequences, according to NASA. They can generate reactive oxygenated species inside cells, which at high levels can stress cells and lead them to cell suicide, introduce DNA mutations, and spark replication errors that lead to cancer.

Related: What are free radicals?

On the surface of Earth, the thick atmosphere protects most people from the damaging effects of cosmic rays. But cosmic rays pose a serious risk to astronauts, especially as space agencies contemplate long-term missions to the moon and Mars. A six-month stint on the ISS will give astronauts a dose of radiation from cosmic rays equivalent to about 25 lifetimes on the surface. A roundtrip mission to Mars, including some time on its unprotected surface, will triple that exposure.

Space agencies are currently hard at work determining the long-term adverse health effects of accumulated cosmic ray damage, and trying to develop systems to mitigate the risk, such as designing capsules where the cargo act as a cosmic ray shield with the human astronauts protected in the center.

Even though cosmic rays are generally a nuisance, the evolution of life may have been impossible without them. That is the focus of Globus’ research, as she studies the role that cosmic rays play in life. “Cosmic rays cause mutations, and so cosmic rays are linked to the ability to evolve,” she said.

The link between cosmic rays and evolution has long been overlooked, but it is rapidly gaining interest from a variety of fields. For example, “we do not understand the transition from non-life to life,” especially the fact that 19 of the 20 natural amino acids produced by living organisms exhibit homochirality, meaning they’re structurally arranged so they cannot be superposed on their mirror image,” Globus said. “Cosmic rays may play a role in that step.”

Paul M. Sutter is a research professor in astrophysics at the Institute for Advanced Computational Science at Stony Brook University and the Flatiron Institute in New York City. He is also the host of several shows, such as “How the Universe Works” on Science Channel, “Space Out” on Discovery, and his hit “Ask a Spaceman” podcast. He is the author of two books, “Your Place in the Universe” and “How to Die in Space,” as well as a regular contributor to Space.com, LiveScience, and more. Paul received his PhD in Physics from the University of Illinois at Urbana-Champaign in 2011, and spent three years at the Paris Institute of Astrophysics, followed by a research fellowship in Trieste, Italy,